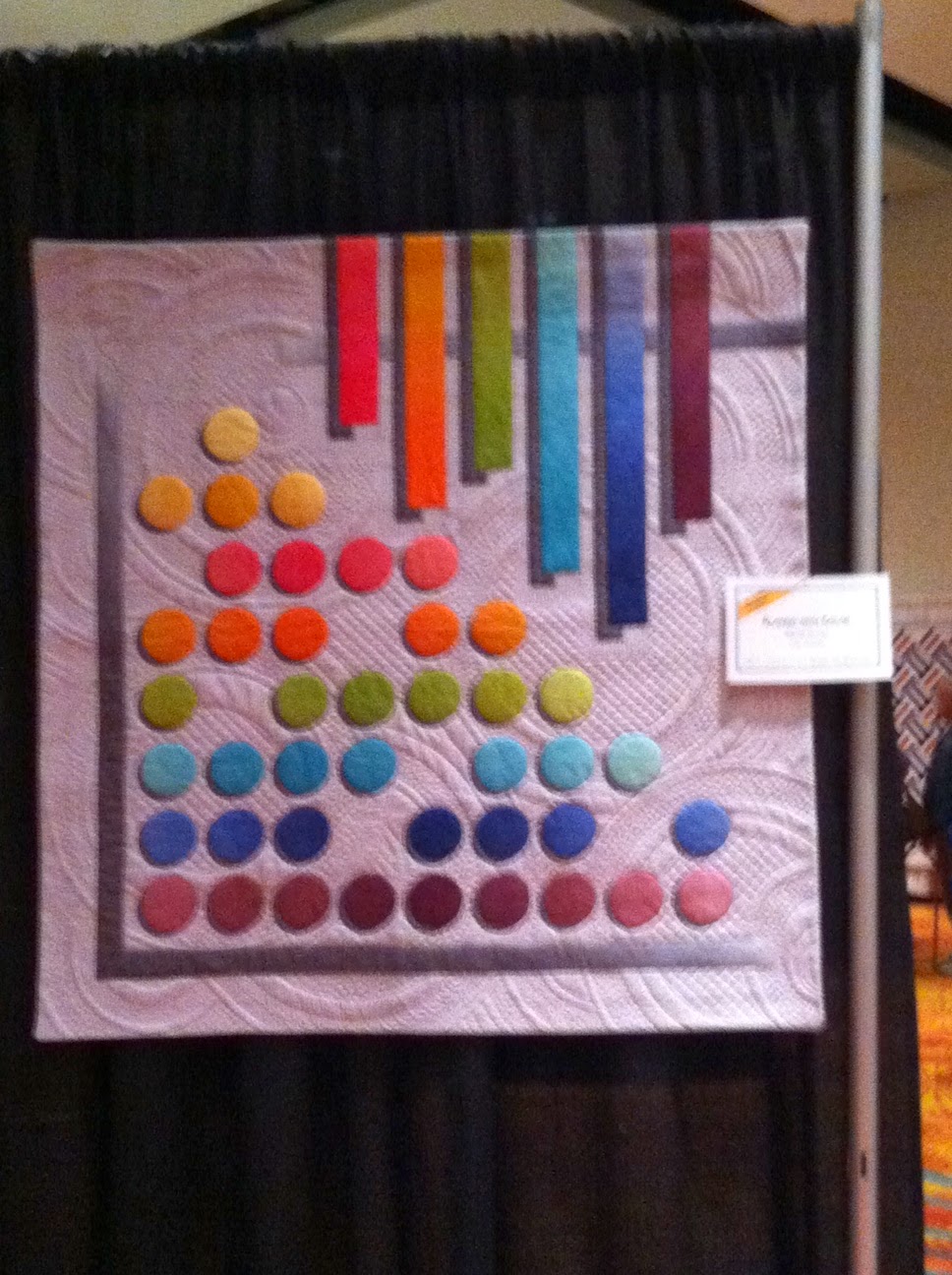 Today, Bobbi and Marsha and I set forth before 8:30 to go to the quilt show in Lancaster. By the time we got there, the parking garage we preferred was filled up, but we found another nearby. We followed the ladies with bags and soon were at the Convention Center. We got there just at ten o'clock, so we really made very good time. We split up upon arrival, agreeing to meet for lunch.

Frankly, there were not a whole lot of quilts that I was crazy about. I had my usual complaint, i.e., that so many were arty quilts rather than bed quilts.

This colorful wall quilt caught my eye. I wouldn't make it, but I did like it. 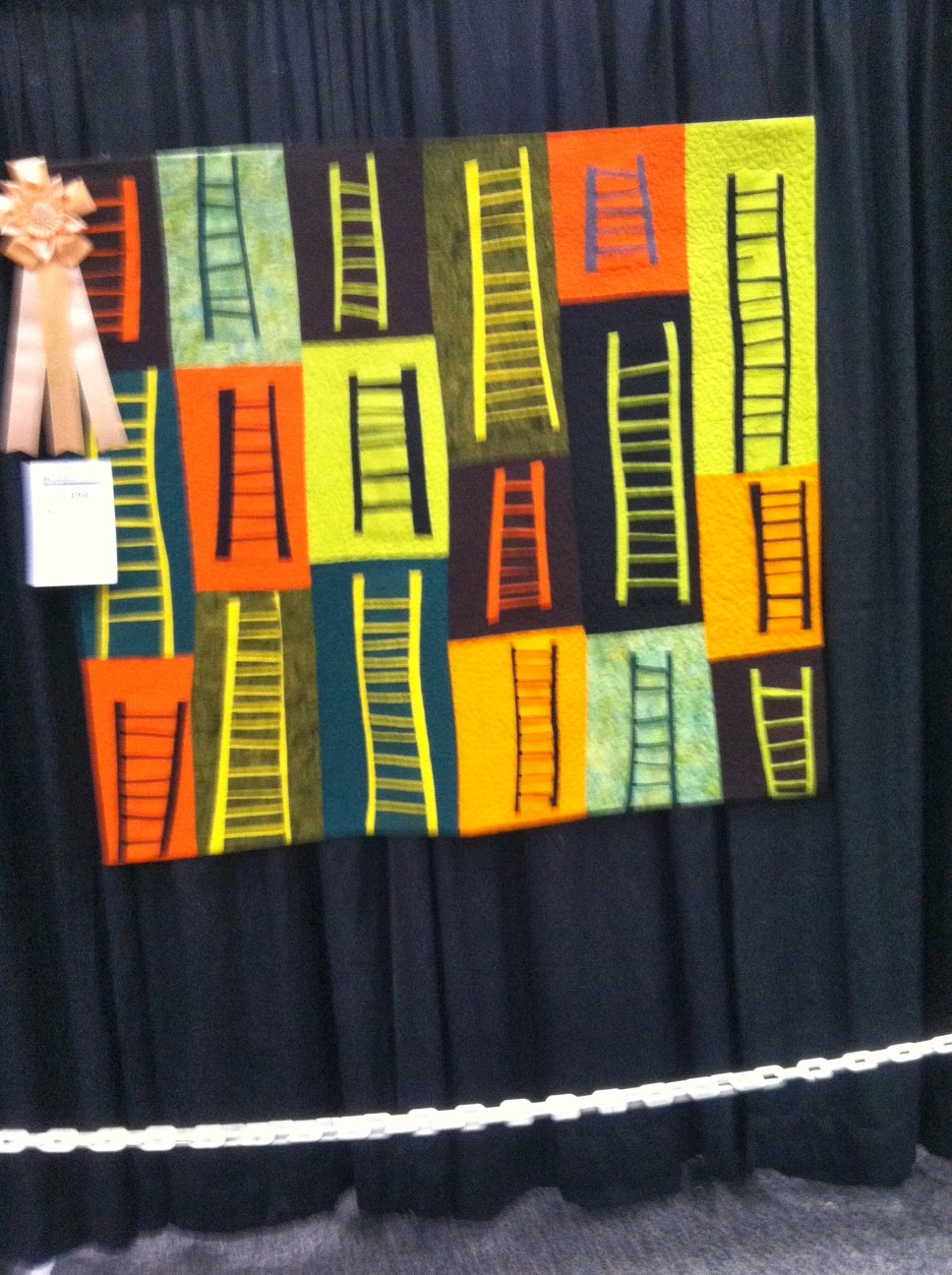 I also liked this quilt called "Broken Ladder" a whole lot. The fabric appeared to be all hand-dyes and I think it warranted the ribbon it received.

I'm revisiting hand-dyes stashwise. For years I bought from a vendor at the old Lancaster show, Millie Chirbuck; her fabrics were just gorgeous. Unfortunately for me, Millie has retired. Her work was very much like Cherrywood, and I thought I would stop and visit them at the show. But they were nowhere to be found.

I did find three vendors with hand-dyes. The first one didn't suit me. The colors were nice enough, but I really didn't like the feel of the fabric. I bought from the other two vendors; one was a Procion booth and the person at the booth really wanted me to buy supplies and do my own. I told her I wasn't ready to dye and bought a rainbow of F8s. The second booth had hand-dyes imported from Uganda! They had a kind of coarse feel to them, which is something that ordinarily wouldn't be to my taste. But I bought two yard pieces and a pack of F8s. 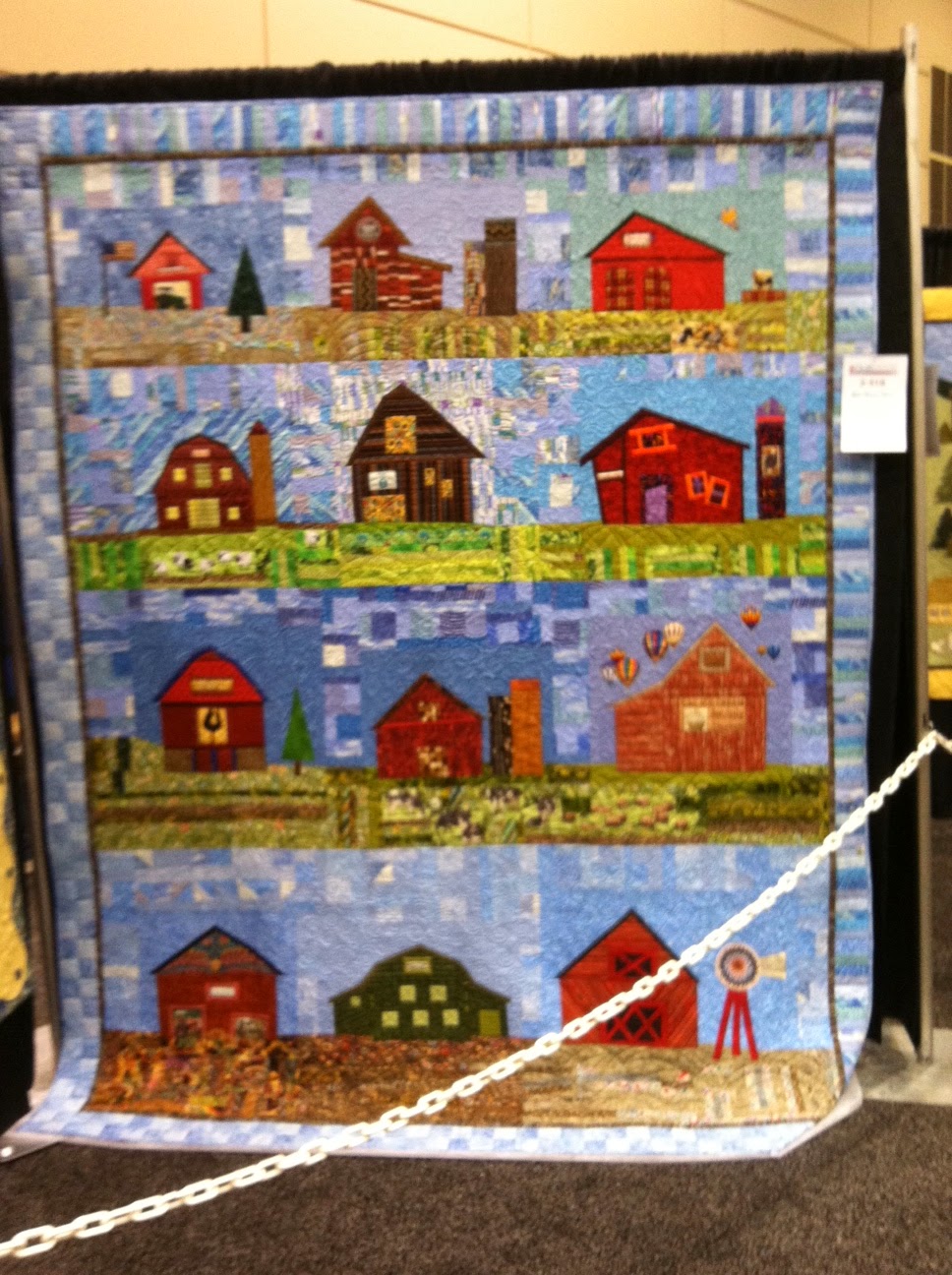 Look! Here's See Rock City. I'm very familiar with this quilt, having seen every single barn come together on Julie's website, and I've liked it so much. But that didn't prepare me for seeing it "in person." Up close and personal, it is nothing short of stunning. I had trouble moving away from it.

When Julie learned that it had been accepted into the show, we talked about her coming up to visit it. Of course she would stay with me, and we'd go to the show, and I'd invite the Renegades in to meet her, and we'd go out to TDFKAZ and Burkholders. We had a wonderful weekend planned. I was just about ready to make up the guest room, when the airline ticket cost put the kabosh on our plans. So I had to go see Rock City without her.

I would have given it a ribbon. A great big blue one. 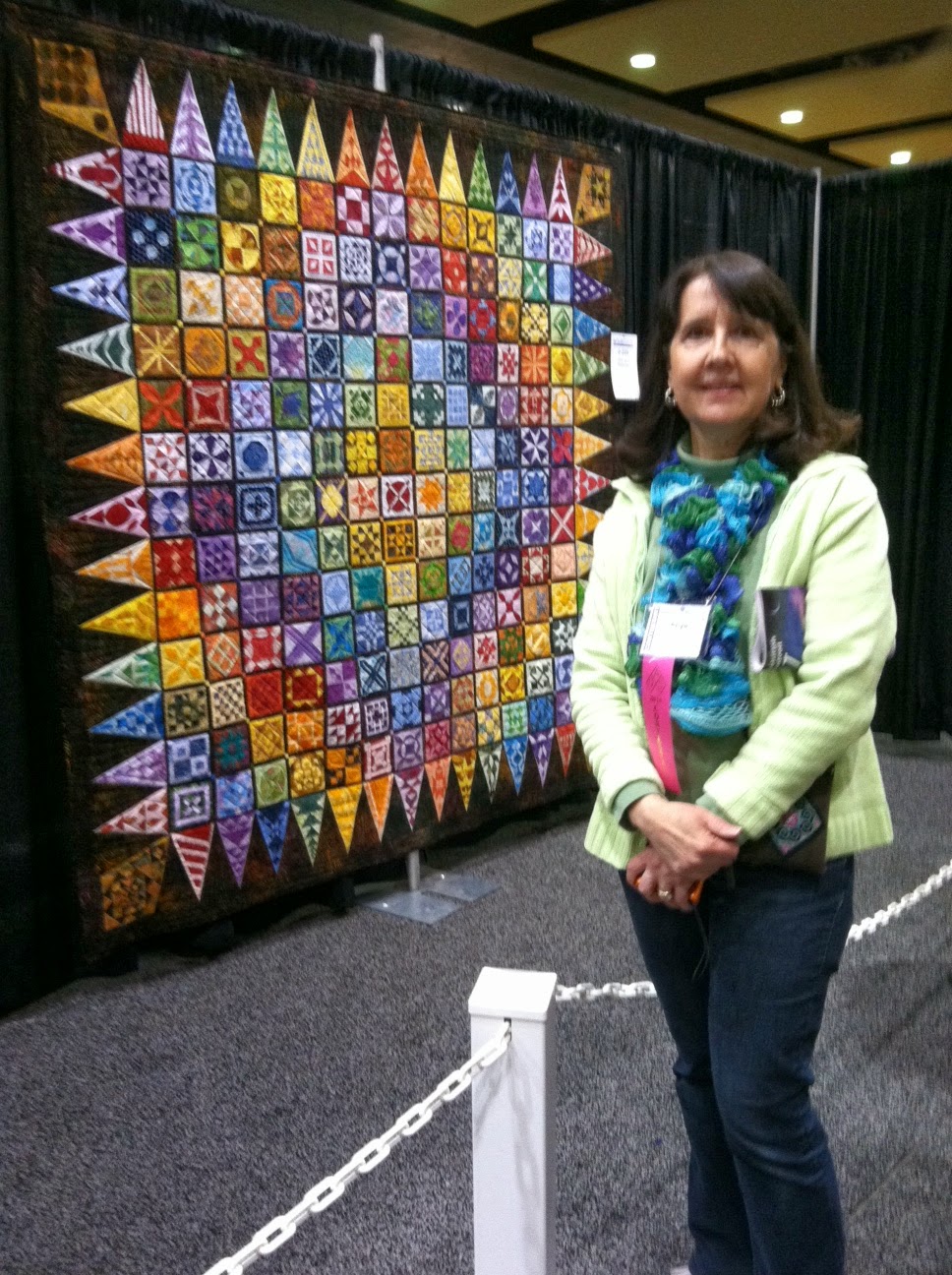 How fortunate was I to have two blog friends who had quilts in this show! Anya made Jane As A Teenager which was a refreshing and exciting change from the bazillion muted Janes I've seen over the years. We met up soon after I arrived at the show and wandered around a bit. We leaned way over the chain so that Anya could point to individual blocks and tell me how she made them. I was dazzled. She spoke of having had participated in a support group while making Jane, and I wasn't surprised. Anya is as lovely as I'd expected her to be. We bumped into each other later on; she had just bought a pair of shoes that had all of the colors from the quilt in them!

Bobbi and Marsha and I met up with some friends from the Guild and had lunch together. It was one of them who put me onto the Ugandan hand dyes booth. Once again I resisted purchasing one of those great big gorgeous African baskets. But it is just a matter of time.

On the way out of Lancaster, we made a brief stop at the "Renegades Mall," a group of vendors that are across the highway from the site of the old Lancaster show. Many of the ones I remembered weren't there, but the Hmong were there with their intricate pieced and embroidered goods, and there were an abundance of "country" type vendors. One small stand had some small-size wooden ruler holders and I bought one. Joe had given me a great big baskety kind of thing for holding rulers and cutters and blades and things. But the small ones would get buried. Now I can have them close at hand and in sight.

So that was our day at the show. None of us was very impressed overall. Bobbi pointed out that her going to a quilt show and not buying any fabric should tell us something. It was a good day for friends -- both bloggy and local -- and nice to be out together and wander around. Nice to do a little shopping and see a few really nice quilts.

And now I'm home. And ready to stock my ruler-holder and fondle my hand dyes.

Susan said…
Glad you had such a good day with friends. I had to skip Lancaster for the second year in a row but that's OK since I've been traveling to see one of my children.
Friday, March 14, 2014 9:12:00 PM

Brenda said…
I saw Julie's quilt -- and Julie-- at the AQS show in Michigan last August. We were vacationing nearby and I realized I could get up to the show and meet Julie. I agree that quilt show get a ribbon!
Friday, March 14, 2014 11:38:00 PM

Barbara Anne said…
What a great day you had and I love seeing a few quilts from the show!

As a kid growing up in the South in the '50s and '60 and travelling in the back seat on family vacations, I have certainly seen 100s of "See Rock City" barn roofs! In fact, I bought DH a red birdhouse with that written on the roof (bought at the Lookout Mt web site). Love the quilt!! Applause!

"Jane as a Teenager" is brilliant and I love the arrangement of the colors across the quilt top. Applause!!

Oh, I have 3 of those amazing African baskets that were sold years ago by one of our LQS.

Lynda Halliger Otvos (Lynda M O) said…
Just seeing the word Lancaster makes me pine for my childhood home in nearby Spring City. Back in the 60s when fields were still being planted with corn you could later buy for fifty cents a dozen right from the farmer, I called those rolling hills near Valley Forge and Gettysburg home. Lancaster was a weekend excursion on a "day trip". We loved the hex signs on the barns; I later replicated them with a Spirograph and colored pencils. Now I think about them while I quilt.

Quiltdivajulie said…
I am so happy that you saw See Rock City in person . . . and thanks for sharing your in-person reactions!

Jane as a Teenager is gorgeous!!

Anya said…
I was delighted to meet you in person, Nancy, and I'm blushing from your writeup about my quilt. Thank you. Enjoy fondling your new fabric!
Saturday, March 15, 2014 4:57:00 PM

Millie said…
Julie's quilt truly is spectacular. I've seen it in person, and it's even more amazing when you can get close up.

Linda K said…
Thanks so much for sharing your trip to the show. For the second year in a row I have missed coming up to Lancaster County to spend the day at the quilt show,shopping at Burkholders & Sauders,eating yummy ( but bad for me) food, and a couple of days visiting with my kids. "See Rock City" is wonderful!! Hope Spring is finally coming to Near Philadelphia.
Sunday, March 16, 2014 9:40:00 AM