Mooing in the Kitchen 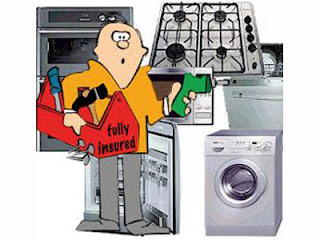 It was early in the autumn that the dishwasher began to misbehave. Taking for ever to get through a cycle. Not getting things totally clean. Developing a hole in one of the silverware compartments. We sort of babied it along, pre-scraping more thoroughly, using the shortest cycle, and being careful with the cutlery basket. And didn't call the repair person. Alas, that was just the start of some dreaded virus that is spreading through our kitchen.

Next problem involved the disposal. It is the kind where we shove the debris down, turn on the cold water, and then hand-turn the cap to activate. Part-way through winter it developed an overly anxious syndrome of not shutting down when the cap was removed. Again, we didn't call the repair person, but learned to be careful, to wait the 7-15 seconds it would take to shut down after removing the cap.

Our appliances aren't that old. We remodeled the kitchen about ten years ago, and everything except the fridge was new at that time. Surely one can expect more than ten years from major appliances? The ceramic cooktop isn't that old -- we've already replaced it because it cracked when the cleaning lady stood on it (she is no longer our cleaning lady).

Push has come to shove, apparently. Yesterday when I got home, Joe told me not to try to use the microwave: it wasn't working at all. And he'd called the repairman. So I put the side dish in the oven and cooked the chicken on the indoor grill, and when we sat down to eat, the pasta concoction was still frozen in some places and tepid in the other, so the oven portion of the appliance is also ailing, in addition to the microwave.

Here's my moo, friends: What does one have to do to get appliances repaired? Joe phoned a repair place and instead of a real person, got an answering machine where he left a message. After three hours of no response, he called two more places and left similar messages.

It has been more than twenty-four hours now, and none of the three places has returned the call. So today he's calling two or three more, probably including the local appliance dealer whom we detest from an unpleasant experience back in the 80s (did we seem like the sort to hold a 30-year grudge?). And we'll see what happens.

I've got company coming for Sunday dinner. Just in case, I'm revising my initial menu to include London Broil on the grill, potato salad, beans in the crockpot, and mixed baby greens. Fortunately someone else is bringing the dessert.

Denise in PA said…
Oh, Nancy, I feel your pain. We remodeled 8 years ago and the stove went two years ago. Our new dryer from last year gave it up just one month under the warranty expiration and our new microwave that we got last December(the new one from the remodel had died already), the turntable stopped working by February. We used Quaker City Appliance Repair in Philadelphia - great service (now these two things were under warranty, but I'd use them even if I was paying). Worth a shot if you can't find anyone else you like!
Wednesday, April 11, 2012 2:05:00 PM

Janet O. said…
Isn't it maddening? Our appliances were new 8 years ago and we have replaced our microwave & fridge and repaired our dishwasher. Good luck!
Wednesday, April 11, 2012 3:05:00 PM

Charleen said…
We just had the same problem. Our local appliance dealer no longer services. We ended up using JB Zimmerman in Lancaster (despite living in Central Montco!). Great service.
Wednesday, April 11, 2012 3:57:00 PM

Quiltdivajulie said…
So sorry you're having such issues . . . I get so tired of waiting for people to return voice mail messages (does anyone besides our office have a REAL person answering the front desk phone anymore?)

Guenveur in Kent said…
For years I had Charlie, who could fix any appliance I had. I don't know if he's still around, or I'd send him to near Philadelphia for you. I hope the Crock Pot works. Have you tried an exorcist?
Wednesday, April 11, 2012 5:53:00 PM

Pat said…
I think I know the local appliance place whereof you speak and don't like them either. They USED to give good service, but then they started servicing only items purchased from them. Must be nice to be able to turn business away. MOOO.

Amy said…
I'm in two quilting bees. When I need something serviced, I ask them, and they know just the companies to contact that provide good, old-fashioned service. They have given me the names of a great appliance store, a handy man, a door company and an electrical company. I've paid slightly higher prices, but the service was excellent, on time, and they haven't needed to come back. I tried an A+ company on Angies' List for my windows, and had problems. Never again. The Piecemakers and Ms. Beehavins are the best references for me!
Wednesday, April 11, 2012 7:33:00 PM

Ms. Jan said…
Oh Sistah, you do not even want to get me started mooing on this topic. Our kitchen (house) is just 9 years old and we can't get replacement parts for our fridge (broken glass shelf), we've replaced the electronic panel on our double ovens 4 times because the clock/timer blows every time the power goes out. We finally gave up and can use the ovens, but no self-cleaning feature or timer. We have replaced our microwave and the stovetop. We have been without our washer for 3 weeks, and after 2 service calls and a replaced motor, the manufacturer is sending someone out to look at it because the local repair folks we use can't figure it out. We've already replaced the electronics in it and it's not even 5 years old and was a Miele--supposedly top line. Oy vey! I'm moooing along with you from the left coast!
Wednesday, April 11, 2012 8:48:00 PM

Salem Stitcher said…
Don't ya just love camping out in your own house? I don't get the "not returning phone calls" thing. Surely someone out there needs a little work! Moo.
Wednesday, April 11, 2012 11:16:00 PM

Jindi's Cottage said…
Oh I hope you find a vaccine for that virus real quick...and that someone, anyone, with the skills to doctor your appliances calls you back!
Thursday, April 12, 2012 5:49:00 AM

Anonymous said…
Yep you are in heaps of $$$ trouble and finding someone to come is just the beginning. First off the microwave will cost more to come look at than to replace.... so it will just be replaced. When I buy appliances I take into consideration who will service it.. so big box stores are generally out. But Sears who did this work for 40 years for me has become lame in fixing so .... to the appliance store is a good bet. It is also a good bet that the "problem" person/persons of '80s are gone... go for it.. after you have been to your banker for appliance loan....
Thursday, April 12, 2012 9:20:00 AM