What's Going on Near Philadelphia 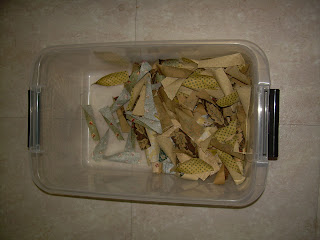 In the past couple of days, I've been in three different fabric emporia. On Friday, Bonnie and I drove out to Jo-Ann's where I bought a pattern and two pieces of crinkly cotton, kind of seersuckery, in bright colors to make two nightgowns, size 4T. Then there was yesterday, more about which in a couple of paragraphs.

I thought you might want to see the progress on my Dresden Plate project. I mentioned earlier that I'm doing the blades as leader-enders. Here's the tub of accumulated blades. I've no idea how many I've made or how many more I need. But I continue! 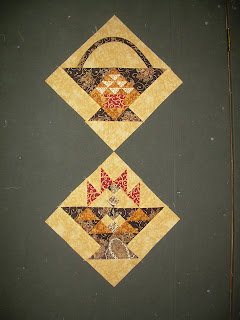 Here's the progress I've made so far on the dreaded guild challenge project. With the fabrics I received, that were so not me, I thought and thought for a month or two. Then I knew what to do: I went to visit Piecemeal, who would never let me down.

I perused the baskets from a couple of years ago and thought, "When in doubt, go with baskets." So I've picked four of her gems (including, of course, the one she named for me!) and have got two of them made. I had the bottom one ready to put up on the wall and -- AAARGH! -- two elements were sewn in backwards. And so a-frogging I would go, and after about 27 minutes of pick pick pick, the two were out and pressed (and not stretched!) and reinserted.

It is so hard to work with fabrics that I don't care for. Especially when there are other things I would rather be doing. 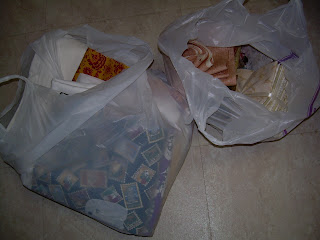 Such as diving into the contents of these two bags -- one from Sauder's and the other from Burkholder's, the yield of a meeting of the Executive Committee yesterday. The four of us left promptly at 10:30, with Judy and me picking Helen and Honna up where the snowdrift used to be. An uneventful hour later we pulled into Sauder's where there were some newbies in the parking lot, trying to figure out where to go in! I picked up batts for my three charity quilts and a couple of yards of a couple of things from the flat-fold table. Then, following a deeply satisfying lunch (including carrot cake with four forks ["I'm an icing person," Honna pointed out rather obviously]), we were off to Burkholder's with our coupons. We returned tired and penniless (and thankful for E-Z Pass!) late in the afternoon, not only heavily laden with bags of fabric, but confident that many of the world's problems had been resolved by our four fine minds.

Deb said…
I've ordered from Burkholder's on-line, but would so like to live close enough to actually experience a shopping trip to that place!
Sunday, April 01, 2012 12:58:00 PM

Candace said…
Now that's my kind of shopping trip! To have Burholder's close would be heaven, too! Oh - and someday remind me to tell you about my first adventure with EZ Pass while visiting hubby's family in SJ!
Cheers!
Sunday, April 01, 2012 1:34:00 PM

Janet O. said…
Less than desirable fabrics notwithstanding, you've created some great baskets there, Nancy.
Oh, what a fun outing you had. Lucky you!
Monday, April 02, 2012 12:46:00 AM

cityquilter grace said…
sounds like a perfectly idyllic trip...ooohh sauders! can't wait to get to lancaster again as still have burkholders to check out!
Monday, April 02, 2012 6:38:00 PM