All the Mooos That's Fit to Print 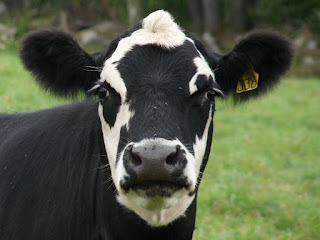 It was a few years ago that I last wrote about my discomfort with the headlines. At that time the CNN website was where I was getting my news, and I became fed up with what they considered news. "How the Dalai Lama Fell In Love with Grits" is an example. I had previously walked away from Comcast's news website in favor of CNN, and I found myself on the moooove again, this time ending up at Huffpo. Where I've stayed for a number of years. While the site has worsened.

It's not just the misleading headlines that lead one to a much tamer story than has been suggested, and it's not just the stories that don't add up to the headline. It's the headlines themselves. The tawdriness of the stories. And the fact that they appear on the main news page. If I want The National Enquirer, thank you, I'll go to the supermarket.

Some of today's top stories on The Huffington Post include:
and the one that is finally driving me away from The Huffington Post as my news source:
I've no idea who Olivia is or which of her other needs I might be expected to meet. But my own need not to know trumps her vaginal sharing. Big time.

I'm off to try out the BBC site. At least this morning when I heard them on the radio announce "Russian Court Frees Pooo-see RY-ott Member" it sounded civilized. And, yes, I know who Pussy Riot is. Andrew told me.

OT Quilter said…
Oh, Nancy. I have been through a similar journey. I do not want to read/hear about the latest celebrity divorce or any other nonsense. We have been faithful subscribers to the NY Times since forever, and I also listen to NPR and the BBC. You might also take a look at the English Al Jazeera World. If you have a smart phone, try Stitcher Radio where you can choose the stories to listen to.
Wednesday, October 10, 2012 4:16:00 PM

LoieJ said…
Ditto, regarding Huffington.
Not sure about BBC, as our public station replaced half of Talk of the Nation with BBC, and I'm not liking it much. I listen to our public radio, MPR, quite a bit, but I also need something on the screen. I actually look at the FOX site just to get a balance. Their news actually comes up faster than the other sites. The iGoogle page has news from many sources. I used to have Google News, a compilation, but stopped going yo that for no good reason.
Wednesday, October 10, 2012 10:49:00 PM

AnnieO said…
I'm with you on the come-on bawdiness of just about any news story. It just makes me click off the site or TV channel! At least with the newspaper I can skip around at my leisure.
Wednesday, October 10, 2012 11:55:00 PM

pcflamingo said…
I fuss at the HuffPo editors about their headline choices all the time. It's like 7th grade mean girls are writing the headlines ... "Rachel Maddow RAGES at guest" when she did no such thing.

Salem Stitcher said…
Many months ago, we ditched cable TV. I do not miss it (with the exception of NCIS). I pick up news through well-informed friends and quick ganders at WXII. A couple of weeks ago I found myself in a hotel room watching Fox News (using THAT word very loosely). There was no news...just stupid celeb stories and tawdry banter between the anchors.

Barbara Anne said…
This would be funny if it weren't so sad and scary. Walter Cronkite must be rolling in his grave. News??! What a bad joke.

I have NPR as my computer home page and we listen only to the BBC America news on TV. We think these are each far less ridiculous than other options.

Next MOO topic, why were civics and art classes removed from many schools? IMHO, to dumb down the population about government is supposed to be run and the citizen's part in that process and to inhibit creative independent thinking. A plot? Perhaps. Our grandparents would be horrified. Okay, off of this soap box now.

Bobbi said…
"It's not just the misleading headlines that lead one to a much tamer story than has been suggested, and it's not just the stories that don't add up to the headline."

This made me think you were disappointed the stories didn't match the tawdriness of the headlines!
Saturday, October 13, 2012 11:13:00 AM