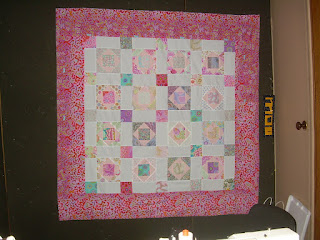 My wonderful long weekend is two-thirds over, but I'm not complaining! I've been so productive! As planned, I made a list of projects in progress (PIPs?) and determined to work on several of them each of the three days. The Modified Mike F approach (he works on everything each day).

This quilt, that I love, is made out of blocks left over from Pinkish, but with palest blue lattice. I don't have a need for this quilt at the moment, but it is going off to the machinest this week because I want to have it finished. I might just end up keeping it, since Caroline is getting Pinkish for Christmas (she can't read yet, so there is no danger mentioning that here). 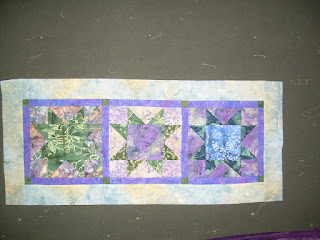 On Tuesday evening, I needed a single 8-3/4" Sawtooth Star -- Turbo had given each of us a batch of same at one point, and I decided that my dozen would make my second Quilt for Kid. Turned out there were only eleven, so I asked Turbo for one more. She brought several, and they were so gorgeous! She let me keep them all, and I've put together this little table runner for me!

It is ready to be sandwiched and quilted, but I'm setting it aside for a bit before doing that. 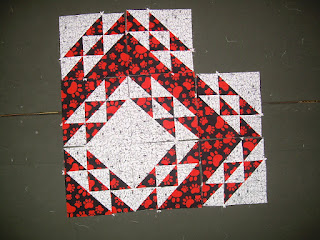 A bunch of people are expecting boys, and I have several very girlish baby/child quilts in various stages of progress. It was kind of fun to pick out this doggy fabric (click to enlarge -- you won't be disappointed!) to make a quilt for a little boy.

Not just any little boy. It is for Grandchild Number Six, who is scheduled to put in an appearance close to Christmas. I have worked on this each day and will work on it some more tomorrow. 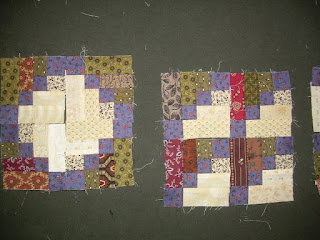 Okay, Janet, here are my blocks so far for Lori's Quilt Along. I was having fun playing with different ways to lay them out. I'll put in some more time on these tomorrow. I guess I'm some sort of a control freak -- even when the project is supposed to be scrappy, I have to have some definition of the color palate.

I also set all of the Quilt for Kid blocks and bordered it; tomorrow I'm planning to make the sandwich and machine quilt it! Additionally, I pieced the back for the quilt that Julie had sent and hope to sandwich it tomorrow and machine quilt it later in the week. And I've worked on a secret project that I can't reveal for a while yet.

LizA. said…
Busy, busy, busy. I believe I might have a fat quarter of that dog fabric tucked away. Love it with the red & black paws. The little quilt made from pinkish leftovers is very sweet.
Sunday, October 07, 2012 9:54:00 PM

Janet O. said…
Looks like you have been extremely productive. I love the little girl quilt. Why is it we have so many of those on hand and then need boy quilts? That is how it always goes for me.
That is a gorgeous runner--beautiful fabrics in those stars!
Even with the photo enlarged, I had to go get my glasses to see the doggy print. : )
Congrats on the impending arrival of #6! That is exciting!!
And thank you for sharing your progress on Mountain Trail. It already speaks to me.
Monday, October 08, 2012 1:10:00 AM

Barbara Anne said…
Pinkish Deux is just adorable and I vote you keep it!

Love the delicious star blocks that are new your new table runner. Turbo was so wonderfully generous!