MOOO on You, General Mills! 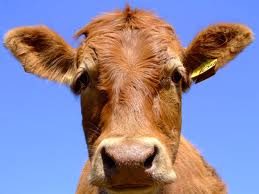 When Sam was just a wee little fellow and first started at day care, Sherry said to me, "You guys eat Cheerios, don't you? Can you save the box top coupons for me? Sam's school gets money for them." Not a problem. For six or more years, we've saved a boatload of Box Tops for Education and the day care has benefited. I later learned that virtually all schools participate in this program, and I'll be saving box tops "box tops" for ever more.

Which leads me to the point of this COW* post. 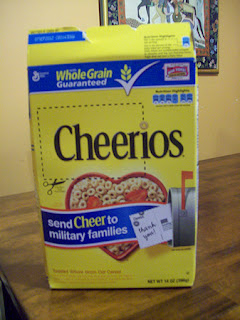 At some point the coupons moved from the top of the box to the front of the box. This particular illustration shows the coupon relatively near to the top, but still it requires an extra effort to remove it. It was a simpler process when it really was a box top.

This morning's box had not one but two "box tops" on the front. But they weren't anywhere near the top. They were down about four inches from the bottom of the box. Requiring more time and effort to remove them. I wish I would have taken a photo, but I was too cranky.

Obviously General Mills wants to be seen as generous and education-minded, providing money in return for "box tops." But they want to make it annoyingly tedious for a person to remove the "box tops" from the boxes.

Hey, General Mills! How about putting the box tops back on the tops of the boxes? Or else changing what they are called to something more accurate? Like "Difficult To Retrieve Coupons for Education"?

Janet O. said…
*LOL* I like your new name for the "Box Tops", Nancy.
I wonder if there were problems with people just ripping the tops off in stores without doing the buying? Seems crazy, but I wouldn't put it past people today. Isn't that a sad commentary?
Tuesday, October 16, 2012 12:19:00 PM

Quiltdivajulie said…
Looks like they wanted to slow down the rate at which 'not really box tops' are submitted!

Lynda Halliger Otvos (Lynda M O) said…
Another "affirmative action" for our schools to help further the education of our kids. Sounds about right to me actually, if I think about it long enough. The goal of any corporation is to make money for its shareholders. That includes Cheerios... More money for school equals less for stockholders. What's not to hate...
Wednesday, October 17, 2012 3:03:00 AM

AnnieO said…
I have noticed there is another box top type logo/name on some boxes, which of course I can't recall now. We saved those for many years when the kids were in school but honestly I had stopped noticing them! Odd that they have now migrated to a different pasture...
Wednesday, October 17, 2012 11:23:00 PM

Just a few weeks ago I came across a small stash of "proof of purchase" coupons from 25-30 years ago when our boys were small. Sigh! Most of those type coupons actually did get sent in for some cool little toys that thrilled the kids. BTW, those POP coupons were on the boxtops.