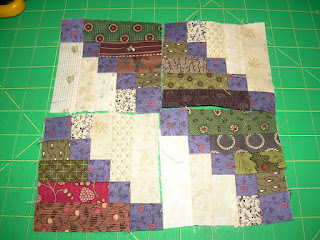 Well, I thought I would post photos to document the last phase of my wonderful three-day weekend.

Here you can see the progress I've made on Lori's Quilt Along. There are still two rounds to go on these little blocks, and I probably will get them done one day this week. This, as you may recall, has been my first QA, and I've enjoyed it so much! Surely it will not be my last.

I also made the sandwich and began machine quilting my second Quilt for Kid. It isn't ready to be shared yet, but it is moving right along.

I did some more on the secret project, too. 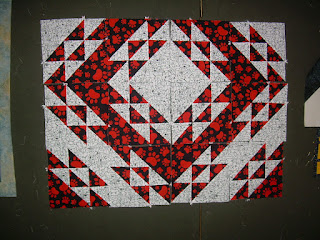 Baby Boy quilts' blocks are three-quarters finished and the other four blocks will be made one afternoon this week.

It was fun to take a break mid-day and meet Honna for lunch. SaladWorks may be a chain, but it sure is a good one. Today we each had a half of a salad and a half of a soup, and were totally satisfied. After lunch I went up to Clinique Bonus Week at the mall and while I was there bought some pants for me and shirts for Joe. Then came home and cooked a spaghetti dinner for Sherry and her children. It was great to see them; it felt like a long time since we were last together. Sam is thriving in first grade and they all had a great deal to chatter about.

My three-day weekend concludes with a West Wing episode from Netflix. We started with the first first episode from the first season months and months ago, and now are just a couple of episodes from the end. It is odd to be watching it against the backdrop of the current campaign.

Janet O. said…
QAL blocks looking very good, Nancy. I haven't assembled any blocks yet. I do love the QALs for minis.
The Baby Boy Quilt is looking very fun. That came together quickly.
You have had a full weekend. Now you need a day off to rest. : )
Monday, October 08, 2012 11:07:00 PM

Donna said…
We have been watching West Wing also. Our son owns all the seasons and loaned them to us. It has been interesting to watch during the election stuff right now.
Monday, October 08, 2012 11:09:00 PM

Barbara Anne said…
Love the Quilt Along block and the Baby Boy quilt, too!! You're making wonderful progress on both projects.

Hope your weather hasn't been as rainy and chilly as it has been here. Still, it's good sewing weather.