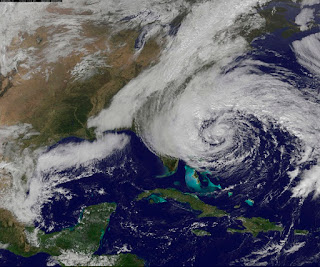 So, Sandy has come and gone, and she appears to have been erratic in her behavior. In the days leading up to the storm, Joe and I were hopeful that all of the commotion was simply what we refer to as "media hype." We were mistaken. However, we were fortunate. We did not lose our electrical power, and we had no damage. There is a bit of messy yard debris, but that is the extent of it. The storm was whimsical Near Philadelphia; my sister who lives less than a mile away lost her power sometime Monday night and still has no return. Small pockets in our town are dark. As one drives around, there is the occasional uprooted tree. The public schools in our township are closed, today for the third consecutive day.
My own school was closed on Monday and Tuesday. On Monday I roasted a butternut squash and made a delicious soup that we had for lunch both days. I also made a huge pot of ham and bean soup. We had had the floor of our guest room refinished, and spent some time on Tuesday wiping down the walls, laundering the curtains and dust ruffle and doing a general purge. We threw away a lot of things that were stored in that room for no particular reason. It looks spiffy and nice.
I had been away for the weekend, sewing with eight close friends at White Oak. We had our usual marvelous time with late-night stitching, delicious and abundant food, consultations and critiques everywhere, and lots and lots of laughter.
So in addition to the souping and cleaning, I simply continued in retreat mode and machined the binding on several quilts and worked on piecing a quilt for a baby boy.
I finished binding one small project and will try to get a photo up tomorrow.

LizA. said…
Glad to hear Sandy was "kind" to you. I sit here, on the west coast, looking at the tv and all the devastation and its hard to believe some of what I'm seeing is actually real life and not some movie set.
Wednesday, October 31, 2012 12:06:00 PM

Linda K said…
Happy to hear that Sandy left you in peace. My son, in Hatfield, lost a big pine tree that fortunately landed in the yard and not on the house. They are still without power. The devastation at the Jersey Shore is horrible and I haven't even seen a video of Cape May yet, where they said that the center of the storm came ashore. Hope the damage there isn't too awful. Lucky you, to spend some sewing time with friends is the best!!
Wednesday, October 31, 2012 12:45:00 PM

Mrs. Goodneedle said…
Hurricane Sandy may have forced the issue but it was Hurricane Nancy running full speed through your house and your projects... must feel good!
Wednesday, October 31, 2012 12:55:00 PM

Pat said…
Great weekend; bad Sandy. MAt least two of our retreat group buddies were still without power this morning. My daughter, who lives not far from your town, is still without power as well. A neighbor's tree fell into their pool, taking out the fence. A freezer full of food, meticulously purchased on sale over the last few months, is toast. SIL Paul and his brother went to work at U of P hospital Sunday night with their trucks packed with extra jumper cables, tow lines and even a chain saw in case they needed to help anyone. Still, we are faring better than those "downa shore". It has been heartbreaking to see videos of the devistation.
Wednesday, October 31, 2012 7:10:00 PM

AnnieO said…
Glad Sandy didn't clobber you personally near Philadelphia. She sure made a big mess lotsa places! Sounds like you made very good use of your off work time.
Thursday, November 01, 2012 4:48:00 PM