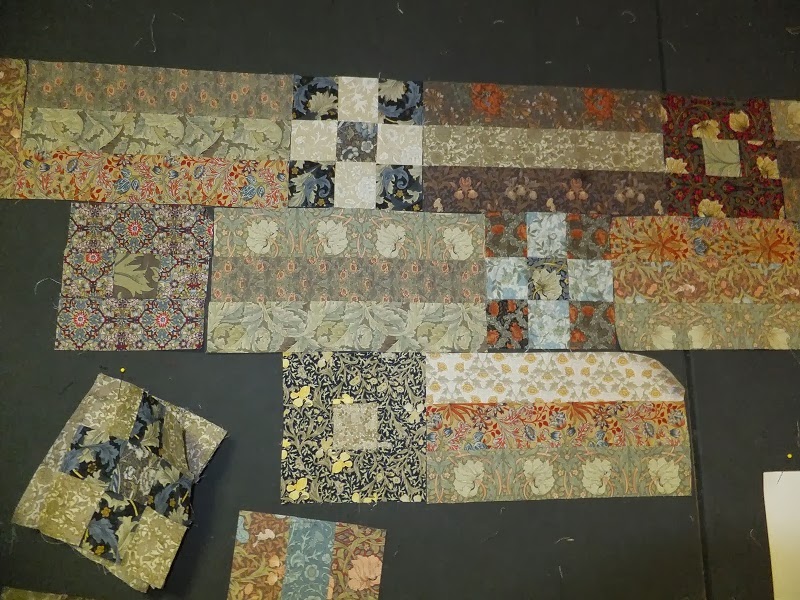 Well, you know, I had seen this picture, this picture that I don't have in a form that I can share it with you, and I had thought that the quilt in the picture was just the thing for my immense stash of William Morris fabrics. So the other day I looked hard at the picture and decided the long units were 12x6 finished and the small units were 6x6 finished and there were two kinds of small units and one kind of large unit and I would need a bunch of 3x6 units for the ends of the rows. I calculated that with five long units to a row, I would need fifteen rows for a queen quilt and then I multiplied the number of strips and squares I would need to cut and then I started doing it. I cut and I stitched and I pressed and I piled. It wasn't hard work. It is the kind of mindless work that would be great to do on a retreat or a group sewing day. I was liking it. 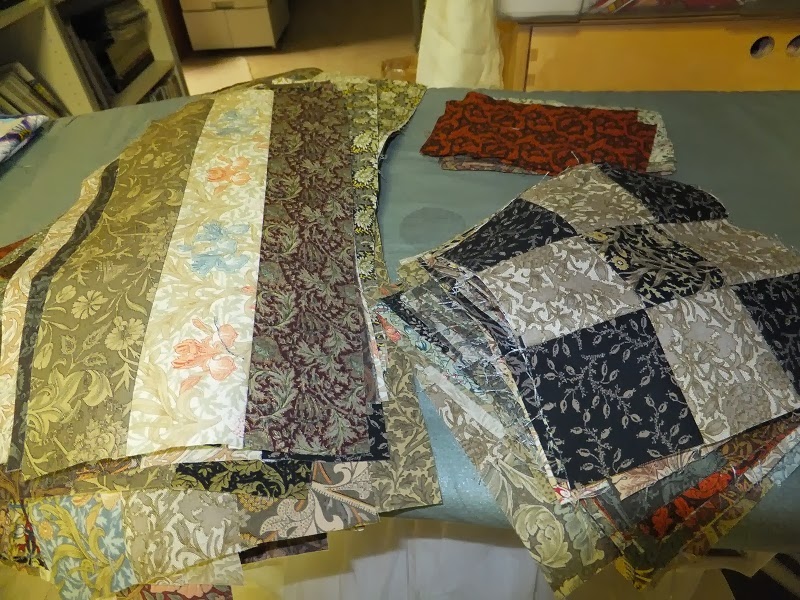 Tonight I finished the last of the small units! And here they are, all stacked up! And now I'm going to put them away until our retreat in April where I'll have ample space to lay out a queen quilt and see how I want the blocks. I'll have eleven additional pair of eyes to help with that.

Oddly, all of this work, enough blocks for a queen-size quilt, didn't empty that Basket of Bill. I really do have a very serious case.

Barbara Anne said…
How intriguing to see this little bit and to read your explanation of the measurements. I'm with Janet in wondering if you won't hear Bill beckoning you back to this quilt well before April!

Applause for getting so much done on this quilt so quickly!!

This pattern might do very well for one of my beribboned bundles of fabrics I intend to use together in some quilt someday... Stay tuned!

howdidIgethere said…
Ooooooo... Love it! I think I see how this is going to work! And ITA that Bill was an inspired choice. Now I need to do a little sketch of my own 'cuz I think I need to make this quilt myself, but in different fabrics. What fabrics? No idea, but it will come to me.... eventually.
Thursday, January 16, 2014 10:14:00 AM

Mrs. Goodneedle said…
It's the curse of putting the scarps away in a dark place. It happens to me too. They multiply. Whenever I sew from scrap bin the scraps have a way of replenishing themselves. It is a curse I tell you! ;) Lovely quilt makings, by the way; there are worse things than having a bin full of Bill!
Friday, January 17, 2014 8:32:00 AM