Black Rock: I Am Ready! 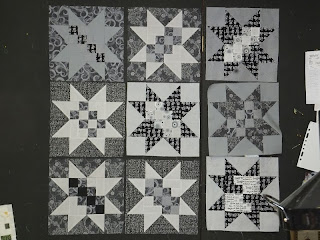 There will be ten of us going to Black Rock (the new White Oak) in the spring: The nine regulars and a mystery woman, "Sylvia" (as in "Who Is Sylvia?"). Nine of us wanted to do a block swap as part of the event, and Kathy offered to come up with a theme and specs. She and I discussed a couple of possibilities and both of us really liked her idea of "Retro TV Stars," i.e., 12" finished blocks, all stars, in gray, black, and white solids and prints.

On the last day of 2013, with all of my important projects finished by year's end (well, I'm still binding a couple of pot holders in front of the television), I thought it would be fun and satisfying to get going on the swap blocks. Some of us committed to stretching ourselves, making more complicated blocks than usual. I dug out a book that I've had for a very long time and only used for one block, paged through, and chose one that would definitely be a challenge. They are finished, and each of the nine is unique. I had a lot of fun making them. 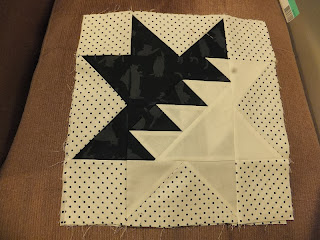 Nine blocks, I thought, were nice, but twelve would be even nicer. So I put out a call to see if any of the Black Rockers wanted to do a side swap and two responded eagerly. We agreed to each make three blocks using a different pattern and different fabrics from the original swap set.

I went back to the book and chose this block and made my three.

Too bad there are three and a half months before we retreat!

Janet O. said…
What a fun and classy theme!
So as you stitch down those important potholder bindings, are you watching black and white old movies on TV? Something must have inspired you to whip up those blocks and be ready to go so far ahead of the game. : )
I guess we will both have to be very patient and wait to see what the others made. My retreat is next week and I don't have our assignment ready yet--wanna come help?
Thursday, January 02, 2014 10:26:00 AM

Barbara Anne said…
What a jazzy, modern look to these black/white/grey blocks! You certainly made these blocks quickly. Applause!!

I'd love to know the block name and the name of the book where you found the blocks. I hope that won't be a lot of trouble. Thank you in advance. :)

If you can believe it, I already have made a list of the quilty gifts I hope to make for folks for next Christmas.

Kat said…
Black Rock is the new White Oak? Does that mean you found a new B and B, or someone purchased the White Oak and changed it's name? I'm guessing I should know the answer, but I don't! Inquiring minds want to know, dear friend :)