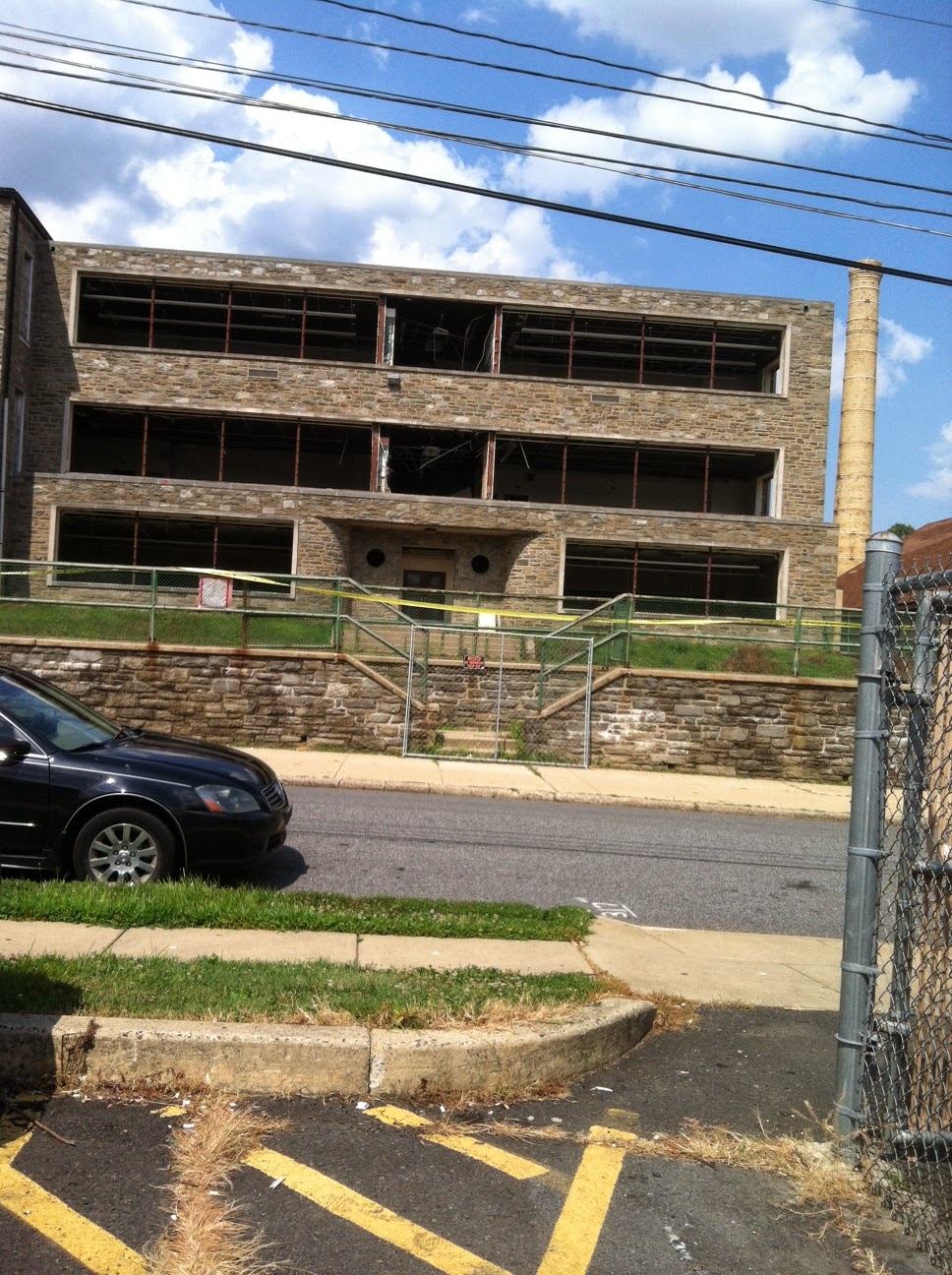 It's been a few months since the news broke. The news that the old elementary school in town was to be razed. It's been unoccupied for a number of years, now, and apparently it has become a safety-and-fire worry. The school district has no plans to use the oldest school building in the township again. Should the population increase significantly, a new structure will be built.

Many people were hit hard by the news. A "save the school" campaign was begun. A Facebook page was created. Final tours were provided. And then the destruction began, and I thought it was unfortunate, but necessary. Then, this afternoon when I went to the nearby grocery store, I had a view of what's happening. And I felt sad. A rush of memories flooded my mind and the sad feeling was almost a fear that destroying the building would destroy the memories. Irrational, but that's what it felt like.

I can remember all of my teachers from elementary school -- Miss Eisenberg, Miss Hartzell, Mrs. Murphy, Mrs. Marte (a mean, mean lady who stuck her thumb in our collarbones if we misbehaved), Miss Koons (who labeled me a gifted speller), and Mr. White. The school was very, very big -- after the K+6 grades of elementary school, students crossed over to the junior high where we spent another three years with the likes of the dreaded Charity Jane Godfrey (7th and 8th grade math, stern beyond belief and a stranger to underarm deodorant), Dr. "Nose" Uhler (8th grade history and something else), Miss "Froggy" Green (the flakiest art teacher imaginable with red hair and eyes that bulged due to a thyroid disorder), Miss Twining (the home economics teacher who told me I would never be any good at either sewing or cooking -- boy, would I like to get my hands on her now!), Mr. Shorb, Mr. Check, Mrs. Koch, Miss Derstine, Miss Dubson, Mr. Broadhag, Miss Bateman (who broke her glasses the same weekend she became engaged), Mrs. Lamont (a close friend had a serious crush on her), and others.

The school colors were blue and gold, the mascot was a tiger, and I can know all the words to the "fight" song, but I won't bore you with those (and you know how well I can carry a tune). I was in the band, and was so proud to wear my blue and gold uniform in the Memorial Day parade. I hated gym class with a passion and had a minor crush on Mrs. Capaldi, the woman who had a one-year appointment as librarian. I can still picture Mrs. DeWalt and Mrs. Hawse in the cafeteria and have fond memories of the meals they prepared; eight ounces of milk for a nickel, by the way.  I remember a lot of my classmates and who some of the couples were. I can still picture the huge paintings of people in international dress on the sides of the auditorium and could easily identify the smell of the locker room blindfolded.

I'm still in slight contact with a small handful of the classmates; today I'm thinking of some of the others and wondering what ever became of Carol Triebel and Lynn Shadle and Bobby Gouak and Woody Strawbridge. Did Bonnie Maniaci grow up to be a veterinarian as predicted? Are Thea and Regina, inseparable for years, still best friends? Is Bill Fegley still incredibly handsome and what about Diane Simmons?

So, "they" are tearing down the buildings, but the memories remain intact. Many of them are fuzzy; others are crystal clear. I needn't have worried.

Susan said…
Every one of the schools I attended has closed, including my college and graduate school (nothing to do with me personally,of course!). So I understand your sadness. As someone who worked in education for many years, it's nice to hear how many of your teachers you remember. Your Miss Koons must have been friends with my sixth grade teacher, Mrs. Duncan. Glad you shared your memories!
Friday, July 11, 2014 10:53:00 PM

Denise in PA said…
Oh, Nancy, I know exactly how you feel. My elementary school, which is (was) in my neighborhood, was just torn down. I miss it terribly and, as I drive that way twice a day, I think about it a lot. It was just a part of the fabric of my neighborhood. In fact, I always thought that when I retired, I might get a part-time job there in the office or something. But, yes, the memories are still there (particularly the memories of those delicious peanut butter bars they served for dessert that I've been trying to recreate forever! o:) )
Saturday, July 12, 2014 8:07:00 AM

Barbara Anne said…
I have similar memories and curiosity about former classmates and teachers.

Decades ago when I was an ER nurse, my first grade teacher came in as a patient. I recognized her name and went it to peek at her but quickly turned to leave. Her daughter stopped me and asked what I was doing. I explained my 1st grade teacher had the same name - it WAS her - and I realized I had thought it wasn't her because she was too short! Duh! I grew!! We all had a good laugh about that.

It is sad when buildings that were part of our lives are gone, tho. Building as supposed to last nearly forever, aren't they? One of the homes I lived in when growing up was torn down so a McMansion could be built on that small lot. That feels odd, too.

As you said, the memories remain.

stitchinpenny said…
My elementary school was old when I attended in the 50's. I think we celebrated the 50th anniversary in my tenure there. It is still being used. There were new buildings added and the stairs were redone while I was there. 5 years after I left it finally came up on the list to be air conditioned. After all it was only the 60's then, but it was Florida. The school looks the same from the front, but there are all sorts of new things from the back. Inside it is so different. But the main building is still the original structure. I have memories too, but the most vivid is climbing the rickety wooden stairs as a second grader to pick up my 6th grade brother's homework assignments everyday for 6 weeks. Normally only 5th and 6th graders got to go upstairs, and I hated it.
I can name and describe all my teachers, the 2 principals, but not the librarian who spoiled me rotten. Funny how the memory works.
Sunday, July 13, 2014 7:14:00 PM

Unknown said…
Glenside Weldon was part of my life, too. Kindergarten thru 2nd grade, I walked those halls myself. Miss Owens for Kindergarten, Miss Myers for 1st grade, and Miss Glading/Mrs. Struk for 2nd. GW was the first school I attended. I missed it after I moved to Florida. That magnificent old building meeting the wrecking ball hurts me a lot, just as it does every student that ever walked those hallowed halls. Never forget the Old Girl; she'll live in our hearts forever.
Wednesday, July 16, 2014 5:55:00 PM

Anonymous said…
Nancy: I had Miss Hartzell, too. Second grade, 1967. When someone, presumably a student, had written "Hell" in the bathroom, she had everyone in the class write "HE" on one side of paper and "LL" on the other. Then she compared the writing to everyone's in the classs. Naturally, my writing matched, according to Ms. Harztzell, who may have gone on to do work for the FBI as a handwriting analyst. (I am kidding.) Anyhow, I wasn't the culprit, I swear. Thanks for posting this. John Banks
Sunday, July 27, 2014 9:40:00 AM