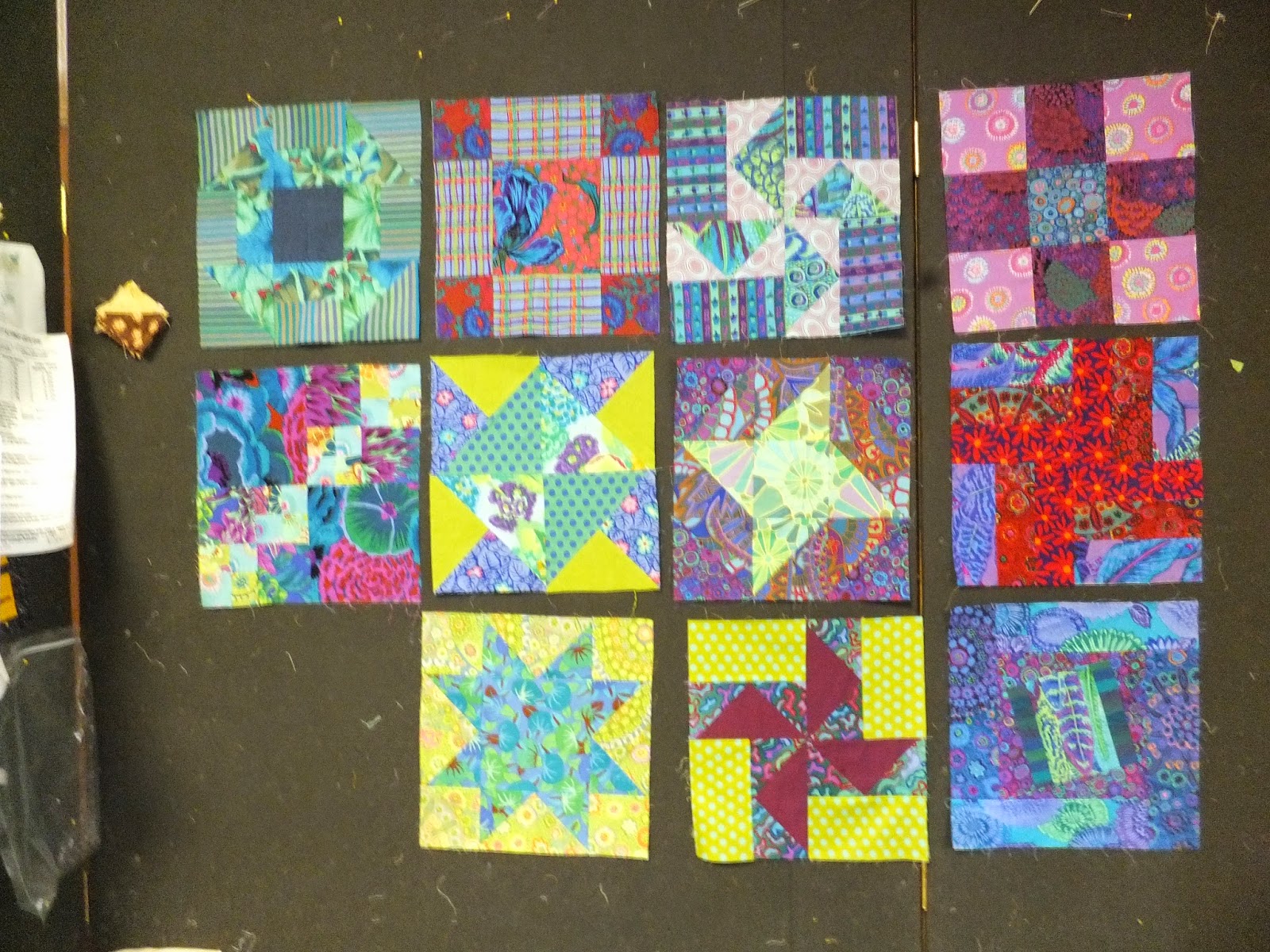 So somebody formed a group on Facebook wherein people would swap fabrics and blocks and whatevers from Kaffe Fassett and associates fabrics. I'm wary of swapping with people I don't know, but it's been a while, so I thought I'd give it a try. The first swap was for 12" finished blocks using only fabrics from the KFC collective. People had the option of specifying the colors they would like. Some people were very particular; others were happy with whatever they received.

I was very specific. I wanted only blues, greens, and purples used in my blocks. I was excitedly looking forward to 20 or so gorgeous cool KFC blocks that I would make into some sort of a huge and delicious flimsy.

It all started ages ago, possibly in late March or early April. I made my blocks and mailed them during the first week. Then the blocks started trickling in. It was fun to sit by the mailbox see what the postal person brought each day. The above blocks come pretty close to my specification. Some of them are terrific; others are kind of casually put together. The one with the big red portion may or may not work with the others. 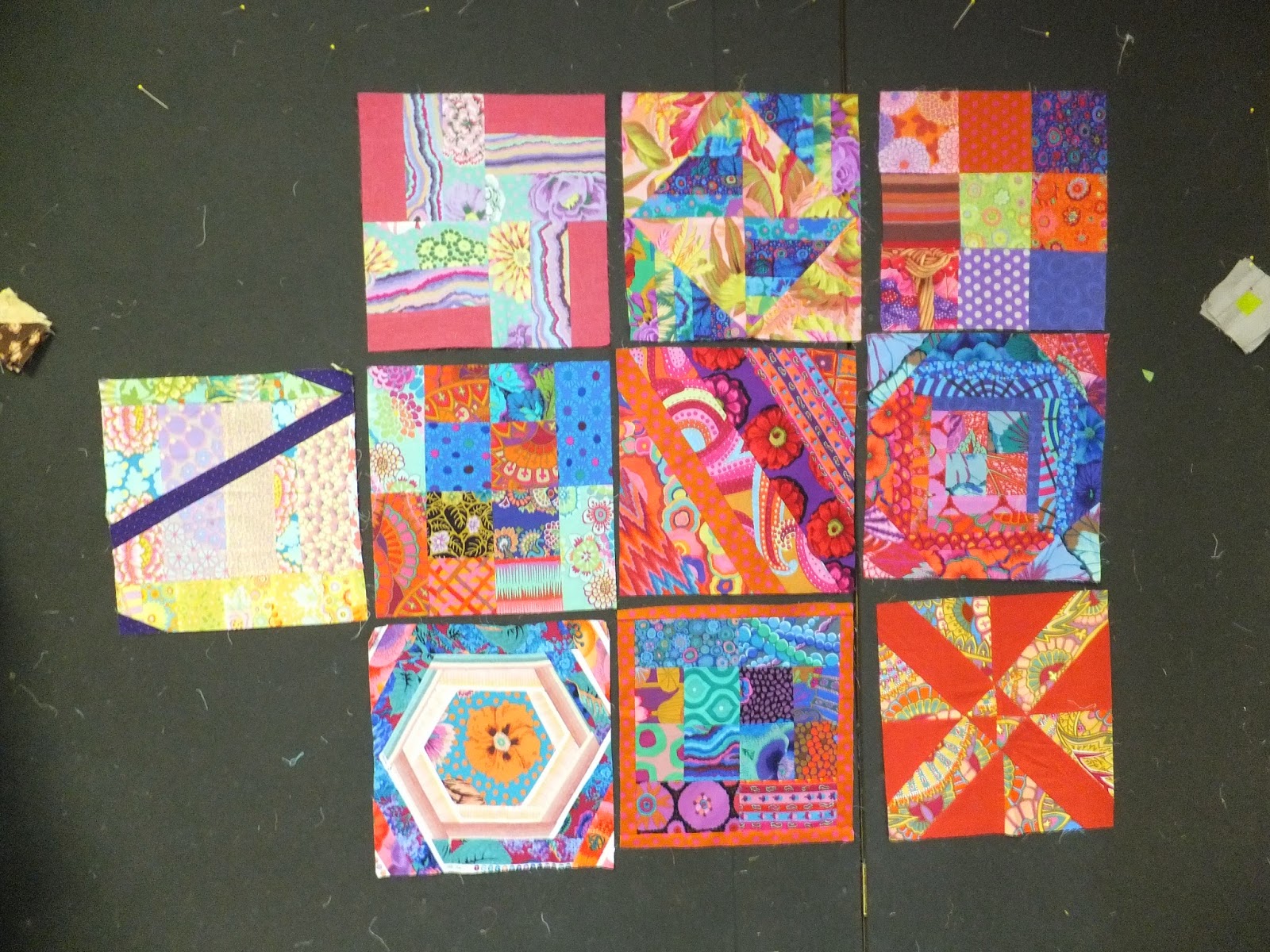 These are the rest of the blocks I received. Some of them actually have a little bit of blue, green or purple in them. One has some non-KFC purple inserted as though the maker suddenly realized I wanted that color. One is really pretty from a distance but up close you can see that there are actual selvedges included in the block! Two people haven't bothered to send me a block and have become ominously silent on the Facebook group.

Looking at these blocks makes me cranky. Makes me feel duped. Makes me want to get rid of them. Now there's an idea! Anyone out there want them? If more than one person stakes a claim, I'll draw a name on Friday night. They'll be in the mail on Monday. But don't say you weren't warned.

Now I feel better. Going to go to FB and withdraw from that there group. No point is explaining to them. Just quietly leave and get back to business. Thank you for listening.

Quiltgranny said…
I think sometimes we forget what lessons we learned in the past, so we make the same mistakes twice. Now you can call that experience rather than a mistake! LOL!
Thursday, July 03, 2014 3:32:00 PM

LizA. said…
And that is why I NEVER, EVER do swaps with people I don't know. I'm often inclined to not do them with people I know just because my standards are very different from other people's.
Thursday, July 03, 2014 4:10:00 PM

Janet O. said…
You have just confirmed what others have taught me--as LizA said, "Never do swaps with random groups."
So I never have.
I am sorry that this was such a disappointment. It is frustrating when people don't play by the rules, especially when you have been so careful to meet the requests others made!
Thursday, July 03, 2014 4:42:00 PM

Amy said…
Well, I am going to give it a try with Barb's repro 9 patches. And I hope my blocks are acceptable because it's important to me that I send what I would like to receive. It is sad that some of the FB swappers did not pay attention. And I would be happy to take the bovine blocks and make them into a charity quilt - a silk purse out of cows' ears.
Thursday, July 03, 2014 5:12:00 PM

Carol said…
As I responded to your post on the KFC group, your experience is so typical of what I have been through, especially with people I do not know. As much as I would have loved to receive wonderful KFC blocks from that group swap, I just couldn't bring myself to take that risk, especially with the price of those fabrics these days. I'd rather use that money and fabric to make blocks that I know I would use! Even with my own bee that I have been a member of for almost 14 years, I know to expect less than detailed work from several. And I have given blocks back that were unusable and asked for them to be made over. And they did so. I did it person to person, not in front of the group, calling her to gently explain the problem and ask for my block back or a do-over. Worked great. Your experience makes me even more leery and I think for now I will just enjoy the photos I see and look for ideas.
Thursday, July 03, 2014 8:15:00 PM

I'm happy for someone else to take these blocks as I am covered up with UFOs, Christmas plans, and a baby quilt - plus all I want to do for me. I am slow, so will plug along with my own projects. Thank you anyway.

I like the ideas of pot holders or a charity quilt.

Sorry you were disappointed.

Nemo said…
I've entered a block swap group once - and like you, I never received all of my blocks. They've been sitting in a drawer for almost 10 years. I'm thinking about just throwing them in the trash.

I've always wondered what those who either don't deliver or send off something downright ugly thinks about what they've signed up for.. I strive towards never sending something that I am not completely satisfied with - but rather send something I would be happy to recieve. If I wouldn't want to keep it myself and showcase it to everybody with pride - I don't send it.

The question comes up again when I'm clearly outside of my comfort zone.. I'm working on something now that's way off, especially in colours - but at the same time I find it to be fun, and challenging.

I have resisted getting in to any swaps cuz I know my skill level is lower than most of the quilts I see out there and I have read these same concerns since I began perusing quilting blogs.
Saturday, July 05, 2014 2:55:00 PM

Quiltdivajulie said…
p.s. I rarely swap UNLESS I know my partner and trust him/her. Too many MOO-ing experiences have taught me to resist.
Sunday, July 06, 2014 9:57:00 AM