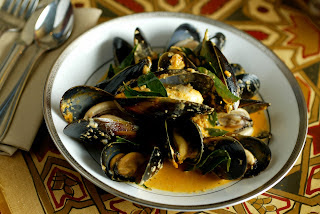 We were fortunate to spend most of this weekend away! Our friend Cessie has a condo at the New Jersey seaside. I had made a quilt to celebrate her having acquired this new home, and in return she offered us the use of it for the weekend of our choosing.
. . . .
We left Near Philadelphia before five o'clock on Friday afternoon, and arrived at Somer's Point and settled in very quickly before heading over to the CrabTrap for dinner.
. . . .
Here's where a little history is in order. From the time I was about twelve years old, I have been allergic to shrimp. Not the throat-closing-can't-breathe kind of allergy, but rather the other kind -- the one where six hours after eating the dang things I become very, very sick in all forms of the gastrointestinal division. Very, very unpleasant. So I've not knowingly consumed a shrimp in many, many a year. This was not a terrible loss for me -- there were plenty of other shellfish to my taste. In my thirties and forties, the allergy spread first to crabs and then to soft-shell crabs. This was more of a loss, but there were still other options. Seventeen years ago I got very sick after eating a fried oyster sandwich, and have not had a shellfish of any sort since. I never knew whether the allergy had spread further or whether I'd just had a bad oyster. Recently, however, I'd been thinking of putting it to the test.
. . . .
We went to the CrabTrap, which is a huge kind of a place, and sort of noisy. But they had good red wine and a terrific menu and an attentive server. I looked at the steamed mussels listed under "appetizers" and decided this was the night! The mussels arrived at 8 p.m. and I cannot tell you how enjoyable, how succulent, how magnificent they were! After a seventeen year hiatus, you probably can imagine. The rest of the dinner was superb, too. Went to bed, not knowing if I'd be rudely awakened at 2:00 or not. And I was not! Imagine my delight! Saturday I was seriously tempted to have oysters on the half shell, but DH suggested I take this at a slower pace, and I agreed.
. . . . 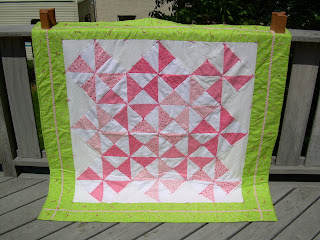 Our little getaway was awfully nice. We snoozed and read and explored Somer's Point. We ate all of our meals out. On Saturday I took Joe to the Ocean City landmark The Chatterbox for breakfast and then we visited the LQS three blocks away. I picked up some I Spy squares -- Sam is nearly sixteen months old and I'm thinking he'll soon be ready for an I Spy quilt -- and I bought some fabrics to give to a friend recovering from an illness. Saturday evening we drove down to Cape May and met Sue and Tom for dinner -- it is always good to be with them and to catch up on the Cape May gossip. We did a little shopping and I finished the Guilt Quilt -- pictured to the left.
. . . .
The story on that, if you don't remember, is that when Caleb was born, a first baby for Russell and Shira, I made him a Bible blocks quilt. I don't usually make quilts for subsequent babies, and when Maya was born and we attended her Naming Ceremony, I took her a little outfit. For reasons that aren't clear, when Russell told me this winter that another little girl would be born in the spring, I made her a quilt. And then got to feeling bad about not having made one for Maya, now not only no longer the only daughter, but also the Middle Child! So I started a simple quilt for her and finished it today. I tied it in variegated pink floss and think it turned out cute. Surely a three-year-old girl will like all that pink and green!
Email Post
Labels: Baby Quilts Other Travel

atet said…
What a wonderful weekend getaway! Your "guilt quilt" is adorable and I'm sure Maya will love it.

Caleb will love an eye spy quilt. My daughter has one made by her great grandmother -- at nap time she can be heard pointing out the animals and making their sounds as she gets ready to go to sleep!
Monday, May 14, 2007 1:53:00 AM

Mrs. Goodneedle said…
Great weekend report, the quilt is precious and sure to be loved and cherished. My laptop crashed on Thursday and I am working with my resident IT guy... but alas, I'm bereft of my companion and my blogging may suffer a bit short term.Happy that you and the mussels got along...
Monday, May 14, 2007 1:46:00 PM