In Which Bill Throws a Party

Two weeks ago our friend Bill threw a party. The following is a pictorial record of this most amazing festive event: 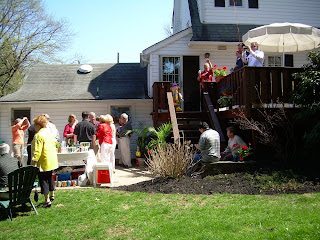 On Sunday afternoon, we gathered in Bill and Carol's back yard for drinks and munchies. Members of the Frahlinger String Band were on hand to entertain us, but the picture of them didn't turn out -- they were moving too much! There were probably a hundred of us. There were nametags ready, and we picked up those for Jubilant Joe and Nordic Nancy. 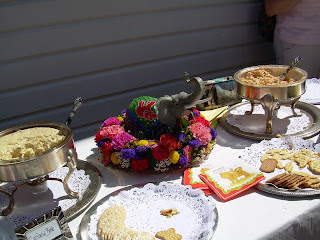 The munchies were yummy. See the elephant centerpiece? It is a foretaste of what was to come! Soon the signal was given that it was time to get onto the buses that had pulled up nearby. 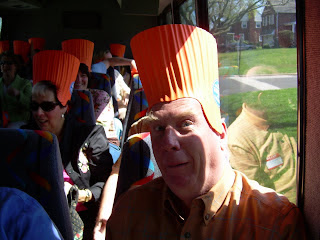 On board, everyone was given a hat. We knew where we were going and why we had received the hats, but at this point I suspect that you, dear reader, do not! Joe looked particularly fetching in his hat, don't you think? Actually, I thought we looked a lot like a group of misguided Shriners.
. . . .
The buses were very comfortable, and in the front of each was a video screen -- we were entertained for the next hour as we traveled by a video of the Ringling Brothers Barnum and Bailey Circus. That's right -- we were on our way to The Greatest Show on Earth!

We arrived a half hour or so before showtime, giving us time to visit the menagerie. Despite the protests of the animal activists outside, we could see that the animals were well cared for; they were safe and dry and their cages were immaculate and surprisingly spacious.
. . . .
Then it was time for the show. As always, I couldn't wait for the elephants!

The zebras were gorgeous, and we noticed that the markings on each one was different from all of the others -- kind of a uique stripey fingerprint. We had very good seats and could see everything very well.

Bello Nock is the star of the show -- he's an amazing clown who does daredevil stunts and holds the attention of all. Bill, our host, is a long-time friend of the Nock family and is Bello's godfather. This isn't the best picture of him, but perhaps you can see his trademark hair.

After the show, we left the Spectrum and crossed the street to Citizens Bank Park, the baseball stadium for Philadelphia, where the Hall of Fame Club at the tip-top had been reserved for us. I couldn't resist taking this picture of the totally empty stadium from so high up. 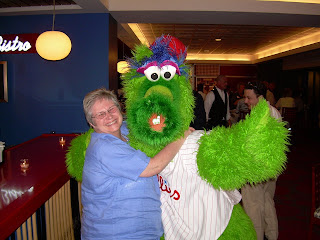 We were joined by some wonderful guests. Here I am with the Philly Phanatic, the mascot of the Phillies baseball team. 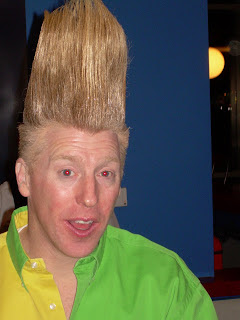 Soon, in came Bello himself, with his mother and brothers. One would expect a great star like this to be full of himself, but he is so nice, so down to earth (which is an odd phrase to use for someone who hangs out on a sway pole and a trapeze!). He spoke with everyone, posed for pictures, and answered questions for a long time. A lovely, lovely man. When asked how he achieves his coiffure, he replied, "A combination of Viagra and Rogaine!" 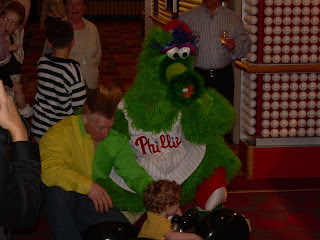 Bello and the Phanatic couldn't seem to get enough of the kids. 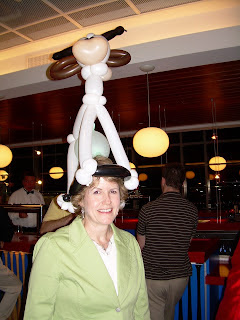 Bill and Carol had thought of everything. There was even an amazing balloon artist at the party -- this lady is wearing a cow-hat that he made especially for her. 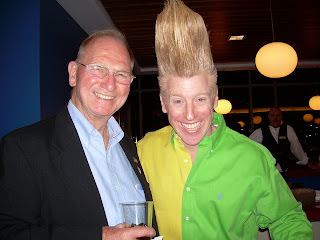 Thank you so much, Bill, for a party we'll never forget!

Susan said…
What a fabulous party, Nancy. You and your friends must have had a wonderful time. The circus still is like it was when I was a child - the anticipation, the drama, the heart-stopping moments. I just love the circus. =)
Thursday, May 10, 2007 10:31:00 PM