Excel Spreadsheets and The Kindness of Strangers 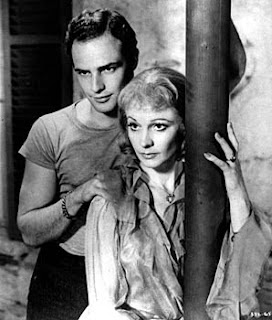 Back in 1997 or so, when Dayle was getting ready to leave Near Philadelphia to accept a call to serve a congregation on the opposite side of the city, I thought to put myself in her place mentally. After all, for several years I had been on the same path as she. But now, she had completed the process and was ready to move on. I couldn't imagine. Joe and I had moved 13 times during the first 13 years we were married (don't ask!) and once we settled Near Philadelphia, we put down deep roots. I really couldn't fathom "starting over" at this point. And I said as much to Dayle, who replied (much too quickly, I thought), "Oh, Nancy, there are nice people everywhere."
. . . .
I knew she was right. And she would do fine. But I wasn't about to put it to the test.
. . . .
Yesterday, I was the beneficiary of the kindness of -- well, they aren't really -- strangers several times over.
. . . .
I'd posted to my blog the night before about inventorying my quilt projects and having all of the data on an Excel spread sheet. I'd put a stock illustration on the post because I didn't know how to get my own into Blogger. Within a few hours, an email from Angela -- whom I've never met -- with explicit, clear, and understandable instructions arrived. Just like that!
. . . .
Later in the day, filled with warmth at Angela's kindness, I put out a feeler about getting translation of a Greek sentence. As of this morning, there have been four varied responses, three of them from women, once again, whom I've never met!
. . . .
So, as Dayle says, "There are nice people everywhere." Some of whom are not strangers at all, though the relationship grew and was nurtured in cyberspace.
. . . .
And now, on to the Excel spreadsheet! Under Angela's tutelage, I display below my own actual UFO/PIGS/WIPS/Whatever log. Taking note, please, that already, on the first day of the third year, another project has been completed! 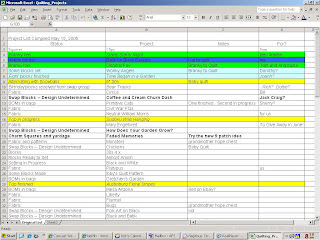 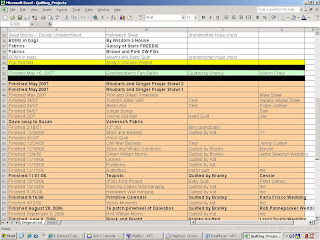 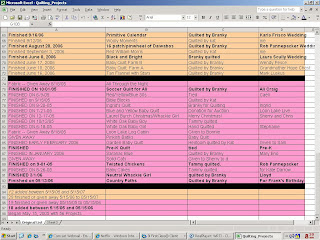 I am NOT a list maker, they make me nervous, lol.

Leslie said…
Posting this here because I don't find your e-mail on your profile.
This is along the lines of books and libraries and such. Check out this link: We take so much for granted!
http://www.boreme.com/boreme/funny-2007/introducing-the-book-p1.php
Thursday, May 17, 2007 1:00:00 PM

Nicole said…
This is incredible. Your detailed spreadsheets have absolutely inspired me to do the same thing. Awesome.
Thursday, May 17, 2007 3:14:00 PM

Anonymous said…
WOAH! How long have you been keeping track? Thats a lot of quilts! Now what you really need to do is figure out a way to have a photo of each completed quilt in your database. ^_-
Thursday, May 17, 2007 5:28:00 PM

atet said…
Awww -- thanks for the kind comments, really, it wasn't much. But all of the work those spreadsheets represent. And it gives me a great idea to track my own projects. Thanks!
Friday, May 18, 2007 3:15:00 AM