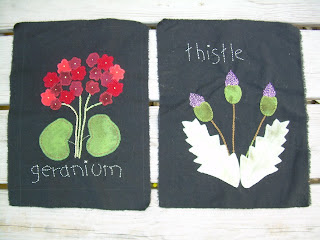 In the past week, I've finished two more of the "Time Began in a Garden" blocks. They really do go quickly. "Geranium" and "Thistle" are the last two that I had bonded.
. . . .
I believe there are four more of these to do, and then the big center motif. I'd like to get these four bonded in the next week or two, and hope to get them completed by the end of June. Then there is the larger central panel that is to be surrounded by these individual blocks. Joe and I are going on a rather major vacation in mid-July, and my thought was to get that central panel all bonded and take it along to work on at odd moments during the vacation.
. . . . 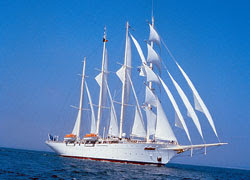 This might be a good opportunity to tell a little about this trip, which is unlike anything we've done before. Our kids are all great travelers; all of them have been to Europe at least twice and they have been to other places as well. Joe and I have not traveled a lot. We did go on a trip to Italy and Oberammergau in 2000; that is the only time we have been to Europe.
. . . .
Quite out of the blue, this summer we are going to Greece! As so often is the case with us, it was a spontaneous decision, not one planned and planned and planned. One day last fall when we were thinking seriously of going to Scandinavia this coming summer, the mail brought a thick brochure from a company that has a fleet of clipper ships http://www.starclippers.com/ We looked it over and although we had never spoken seriously of going to Greece, suddenly Scandinavia flew out the window and the Greek Isles flew in! We'll leave Philadelphia on July 13 and arrive in Athens on the 14th, where we'll board the Star Flyer and spend the next week sailing in and out of Kusadasi, Turkey, and the Greek Isles of Samos, Patmos, Delos, Mykonos and Sifnos, returning to Athens on the 21st (which happens to be our 40th wedding anniversary) and staying there for four night before returning home.
. . . .
It isn't likely that I'll have a lot of time for stitching on this amazing trip, but one never knows, and should travel well-prepared!
Email Post

Tanya said…
Wow! What a nice sounding trip! You never know. Sometimes there is a lot of waiting in the airports etc. I would often take embroidery on a plane when flying long distances. (I haven't done it sine the higher restrictions for carry-ons.) Looking forward to seeing Greece through your eyes.
Sunday, May 06, 2007 5:56:00 PM

atet said…
Oh -- what a lovely trip for your anniversary! I have friends who did something similar for their honeymoon (larger ship though) and they LOVED Greece. They even named their new puppy (at the time) after their favorite island -- Delos. Have a lovely time!
Monday, May 07, 2007 12:16:00 AM

Mrs. Goodneedle said…
Oooh... I'm green. That sounds fabulous, I'll toast your trip with a glass of my favorite white wine, a Boutari Santorini (which just happens to come from guess where?). Cheers!!
Monday, May 07, 2007 8:36:00 AM

Ancestor Collector said…
What an amazing way to spend your 40th anniversary! Congratulations!
Saturday, May 12, 2007 7:25:00 PM