I Had To Make One, Too 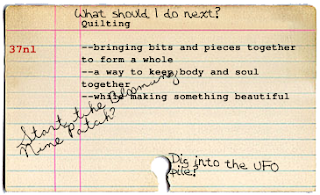 Growing up, my heart's desire was to be a librarian. From the time I learned to read, I would rather do that than anything else. I went through books like wildfire. I read all of the Bobbsey Twins, Cherry Ames, Nancy Drew, all of those series books. My parents subscribed to Reader's Digest Condensed Books, and I read every selection in every volume that we received.

. . . .
When I got to junior high school, I worked at the school library during a "club" period. The woman who was the librarian, Mrs. Capaldi, took an interest in me, and invited me to become a library volunteer after school. Sue, Bob and I were the library nerds, and we had a wonderful time one afternoon each week reshelving books and writing out the overdue notices. It was one of the happiest times I can remember.
. . . .
For reasons I never understood, this activity was unacceptable to my parents. I was forbidden to work in the library, and because I couldn't stand to have this joy taken away from me, I lied. That year the junior high started an intramural girls' basketball program that played after school. I told my mother I was going to join and this met with her approval.
. . . .
For weeks it worked without a hitch. There was no interest at home in whether my team won or lost, so it never got complicated. I just had to say I was going to be late because my basketball team was playing. And that was how I got to continue in the library. In time, of course, I was found out -- a friend's mother stopped into the library and innocently mentioned having seen me there. The principal was contacted, and I came straight home after school each day thereafter.
. . . .
Mrs. Capaldi had intimated that since we were such good volunteers, Sue, Bob, and I might be soon moving on to increased responsibilities -- perhaps even including making cards for the catalog. I don't know whether Sue and Bob ever got to do that.
. . . .
I hadn't thought about the school library in many, many years. But when blogs recently started sporting these wonderful catalog cards, I remembered, and decided it really, really was time I got to make one.
Email Post
Labels: History

LoieJ said…
Funny similarities and contrasts to my junior high situation. I also loved the library, but I didn't help there until Sr. Hi, when I was in library club. In jr hi, my mom made me join GAA (Girls Athletic Association) which I didn't like. I was an active kid, but I'm not competative, but probably I mostly didn't want to do it because mom said so. But, hey, in those days, we walked to and from school, a mile each way. We got more exercise than kids do now days.

In college I actually took one or two library science courses and scored high in appitude in that area. I alphabetize my spices...
Thursday, May 10, 2007 4:42:00 PM

atet said…
I read the cherry ames books too, loved that student nurse!

I can't imagine parents not wanting their child to be involved with books and libraries. I've worked in them on and off, whether as an employee or dedicated student doing research, since I was very young (of course, my mother is a librarian so that *may* have something to do with it). Glad you finally got to make your own card. (of course, the library at my university just finally got rid of their card catalog, now everything is on computer)
Thursday, May 10, 2007 4:51:00 PM

Mrs. Goodneedle said…
I haven't thought about card catalogs or the Dewey Decimal System in years. Love the card! Sorry you were forbidden to work in the library, that does seem curious; but your mom must have had a reason that made sense to her at the time.
Thursday, May 10, 2007 4:59:00 PM

Patti said…
How very sad your parents didn't support you in your love. I think that's one of the most important parts of parenting - supporting kids in their life choices even if it's not what you dreamed for them. Of course that's assuming their life's choices are legal, relatively safe, and not harmful to themselves or others!
Thursday, May 10, 2007 8:28:00 PM

Susan said…
How interesting, Nancy! I never knew that about you. I wonder why your parents thought working in the library unacceptable? My parents wouldn't let me play sports! LOL!
Thursday, May 10, 2007 8:40:00 PM

Ms. Jan said…
I can't imagine why your parents would object, but who knows what they were thinking? I worked in the library in Jr. High and absolutely loved it, so I know where you are coming from. You always manage to share the tough stuff and I appreciate that so much.
xoxoxoxox
Thursday, May 10, 2007 9:14:00 PM

Pam said…
That is such a sad story. I wonder why your parents were like that? They might have been afraid of what you might learn.

Leslie said…
Awww what memories you evoke with your muses. I love all that cataloging, libary stuff too. In the 70's worked in the college library where I met the man that became my husband... love among the stacks. Years later worked as a library sub at the local elementary school for awhile... then at a different college library in a different town I was interim help while they worked to put the whole catalog system on-line. Things sure have changed! Down with people that say books and libraries are going the way of the doo-doo bird. What happens to great civilizations when their libraries are lost. Not good. We will *never* tire of holding a book and softly turning the pages by lamp light.
Friday, May 11, 2007 12:32:00 PM

Ancestor Collector said…
How sad you were forbidden to work in the library. My daughter also loved books from the time she was very small. When we went to the library, she would bring home dozens of books at one time, and have them all read long before they were due back. She combined that love of books with her love of children and now she's a middle school librarian. She absolutely loves her job, and isn't that everyone's dream? Had you been allowed to pursue your library passion, I wonder if you'd be a librarian today?
Saturday, May 12, 2007 7:21:00 PM

Anonymous said…
I made library cards for all my series books as a kid, and volunteered at Near Phila library. WEnt off to college and got a science degree, which didn;t get me very far. MY father actually dropped a library scchool brochure in my lap one day and siad "maybe you should try this". I now prodly call myslef a corporate Librarian!
Thursday, May 17, 2007 5:24:00 PM