Beatin' the Heat Near Philadelphia 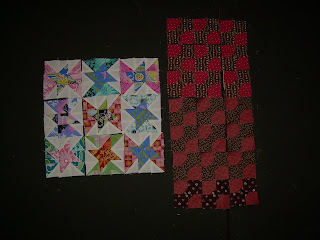 Trying to keep some semblance of cool has consumed the energy of a lot of Near Philadelphians, and it doesn't look like a whole lot of relief is in the forecast.  My sewing studio isn't air-conditioned; it is on the lower level of the house, though, and tends to be cooler than the rest of the home.  I have a nice big floor fan that helps.  But these past few days, it just hasn't been very inviting.

Yesterday I had a double treat of a day:  (a) spending  it with a dozen other quilters and (b) doing that in a spacious, air-conditioned church hall!  I stayed from 8 until 1:30 and got nine of my Schnibbles units finished.  Will do a total review of the Schnibble experience when it is complete.  You can see my blocks here along with my bowties.  I don't believe I'll be sewing downstairs again for a few days; I tend to get a little sick with extreme heat and feel fortunate that I've been okay for the past week.  It was just this morning that that queasy feeling started, so I'll be staying pretty much on the main level of the house, which has a pair of window units, three ceiling fans, and strategically placed floor fans, all working overtime.  I continue to applique the circles for those prairie women and bind Argyle, Anyone? when I sit with Joe in front of the Tour de France or whatever Netflix is playing.

Last evening our neighbors came over for dinner and I had a good time making a refreshing meal for them.  I didn't tell them until the very end of the evening that the sangria, the appetizers, the salad, and the dessert were all Weight Watcher recipes. 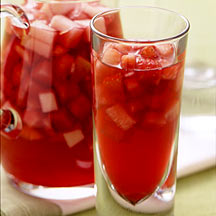 The sangria was very light, and I think not a lot like traditional sangria.  But it was delicious and easy to make, so I'll tell you how:  To 1 cup dry red wine, add 3 cups low-calorie cranberry cocktail, 3 cups of cut up fruit (I used strawberries and pineapple) and 1/8 tsp cinnamon.  Let it chill in the fridge for at least 30 minutes before serving.

I was suspicious of the cinnamon, but it made all the difference.  The photo isn't mine, but came from the internet.  I didn't think of taking a picture last evening because I was too focused on making and serving my skewered cantaloupe, mint and prosciutto and also grape tomatoes with basil and mini-mozzarella balls.  Of which there are one of each left over -- and it is nearly time for lunch!

antique quilter said…
oh I love your blocks!!! great colors for the bowties!!!!
I know what you mean about the heat
this is just awful isn't it
I can't sew in the afternoon the room is just too hot
looking forward to tomorrow the 80's!
actually looking foward to the fall and 60's is more to my liking!
Kathie
Sunday, July 24, 2011 11:33:00 AM

Pat said…
I, too, get queasy with the heat, so I can sympathize.

That sangria recipe looks wonderful. I tend to stay away from anything with alcohol in the heat because I just want to chug down large amounts of fluid. Not good if there is alcohol in the punch and it goes down easy! This looks sippin' good, and could probably be cut with some seltzer to make it even lighter and more chuggable.
Sunday, July 24, 2011 12:52:00 PM

Pamela Kieffer said…
I agree with Pat, the alcohol just makes me hotter.
Glad to see you are using the Weight Watcher's recipes. They do have some good ones but why so many for desserts.
How are you doing with the new W.W.
program. I think it is perfect for summer.
Sunday, July 24, 2011 2:49:00 PM

Janet O. said…
Twice in my adult life I have experienced heat exhaustion and I just haven't been the same in the heat ever since. But we aren't having the heat wave here in Utah. We haven't even hit 100 in our little valley this year--and we are dry heat so the 90s aren't as draining as they are when it is humid, like many of you deal with.
But I'm with Kathie--bring on fall!
Your sewing projects are coming along--looking good.
Sunday, July 24, 2011 4:49:00 PM

Anonymous said…
I've never noticed feeling this bad in the heat, but when you mentioned being queasy, that describes it exactly. I'm thinking about getting a window a/c unit, need something to help me through this weather. Thanks for sharing.
cindy
Sunday, July 24, 2011 8:57:00 PM

Mrs. Goodneedle said…
Your meal sounds delicious and refreshing; glad you're making the most of these ridiculously hot days; love your Schnibbles!
Sunday, July 24, 2011 11:17:00 PM

Louise said…
Thanks for the recipe. It looks so refreshing!
I'm sorry you don't have AC in the sewing room. You could probably temporary turn another part of your house into a sewing space.
Stay cool...this heat is not fun.
Wednesday, July 27, 2011 11:25:00 PM