In Which my Schnibble Goes Rogue! 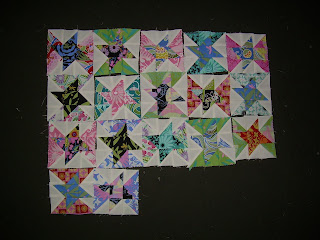 First of all, I need to say that the turn of events had nothing whatsoever to do with the Schnibble pattern itself!  Ya gotta believe me on that.  It was all about the fabric choice I made.  I know that.  It was something or another by Kate Spain (I didn't keep the paper label that came with the charm packs) and the fabrics were gorgeous. Very gorgeouos. And the "Mon Ami" Schnibble pattern was and is a truly nifty pattern.  Done in the fabrics Carrie chose, it is so appealing! But that the fabric and the pattern would not play nicely together.  Oh, no, they would not.

Each individual block was nice enough.  And after awhile, I got the hang of the "contrast thing."  But putting those blocks together the way the pattern called for was making me cross-eyed.  And cranky.  I was not liking my project one bit.  And I wanted to quit.  It wasn't the pattern.  There was just too much going on.  And I did not wish to continue the chaos.

So I went over to start to take the blocks down from the wall and try to figure out some use for them, when it suddenly hit me:  These particular blocks just needed some breathing space!  They were smothering each other! 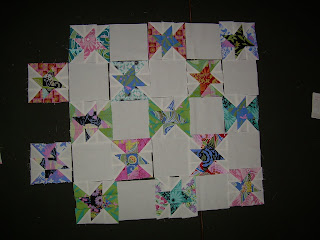 Much the way my infamous leader-ender projects will insist on becoming "real" projects instead of leader-enders, these stout-hearted little Schnibbles demanded that I give them a chance.  And some room to breathe.

And just look at that!  Alternating a plain white square makes all the difference.  An individual block can be seen, identified, and appreciated.  And would you look at the secondary pattern that is emerging from the white?  Is that not a joy to behold?

The Schnibble pattern is 5x5 blocks.  But these rogue Schnibbles want more.  I'm going to go 7x7 and then finish the project with the borders that Carrie calls for.  And end up with a Cousin to a Schnibble, I think, a little quilt that will please me very much.  Stay tuned!

Gari in AL said…
I really like your Cousin plan. Since I recently had the same confrontation at the design wall, I completely understand. Listening to the quilt is an art, I think.
Thursday, July 28, 2011 7:42:00 AM

Marj said…
Your Cousin plan looks so much better. I also love the secondary pattern that has shown up. Glad that the blocks did not become Orphans.lol
Thursday, July 28, 2011 7:46:00 AM

Linda K said…
I really think that some of these "modern" fabrics do need some room to breath. Your new layout looks fantastic. Most of my quilts are from "repro" fabrics, but I'm working on a bright and summery quilt top right now with lots of white and I'm lovin' it. Also heading to PA soon to visit family....first stop Sauder's!!! (well, maybe not first stop LOL)
Thursday, July 28, 2011 8:01:00 AM

Mrs. Goodneedle said…
They were demanding attention on their own... and loudly; sew glad you listened to them. Is the cousin of a Schnibble a Scnobble?
Thursday, July 28, 2011 9:26:00 AM

Lisa said…
In the first photo the quilt was busy looking and that is a popular style right now. I like the blocks separated. Did you try lattice and cornerstones?
Thursday, July 28, 2011 2:37:00 PM

Lynda Halliger Otvos (Lynda M O) said…
The emergent white pattern rocks, Nancy, stroke of genius to separate them out like that with light neutral.
Friday, July 29, 2011 12:11:00 AM

Mary Jane said…
Had same exact situation earlier this year - a Schnibble pattern and precuts from a line of fabric I loved. Figured "they'll all just go together!" I began to refer to it as the "ugly quilt" and it became a personal challenge to figure out a way to make it work. Ended up doing something very similar - set blocks on point with sashing and cornerstones. Now when I refer to it as the "ugly quilt", people who don't know the history think I'm crazy!
Friday, July 29, 2011 11:11:00 AM