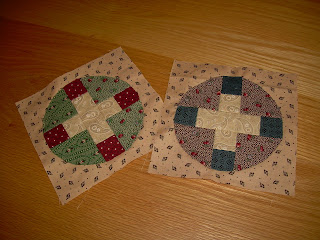 I have about half of the blocks made for the Schnibbles project and have learned a few things already, none of which are directly about the Schnibble experience:  (a) just because a fabric is pretty and makes nice 5" squares doesn't mean it will make nice 2" squares; (b) pinked edges are not my friends; (c) contrast can be harder than I'd thought.  But I press on and will get this Schnibble finished!

As to another of my summer projects, learning to do freezer paper applique, I've painlessly (other than the thumb incident!) completed two of the thirty blocks and look forward with pleasure to finishing the remaining ones as a travel-or-television project.  I don't think I'm going to convert into any kind of prodigious applique maven, but it is something I might do again.

Last night I finished binding Argyle, Anyone? and had hoped to take a photograph of her today.  But -- praise God -- it is raining and so that will need to wait another day or so.

Haven't done anything with the paper piecing goal as yet.  But there are at least another five weeks of summer left, aren't there?

Lynda Halliger Otvos (Lynda M O) said…
Has summer come yet !~!~? We in northern California, Oregon, up that way are looking in vain for some hot weather so we can go swimming in the rivers and tubing. It’s just been too chilly this year for most everyone I know anyway.
Monday, July 25, 2011 4:35:00 PM

Pat said…
I am jealous of your applique skills!

You are corrrect: pinked edges, especially pinked with teeny tiny itsy bitsy pinking things, are not your friends. Especially if you are wearing dark clothing.
Monday, July 25, 2011 8:11:00 PM

Salem Stitcher said…
I am loving those blocks.

Pamela Kieffer said…
I love applique, in fact that is what I taught myself to do before I ever made a patch. Paper piecing is a dream. Sharp points in triangle you wouldn't believe.
Monday, July 25, 2011 10:21:00 PM