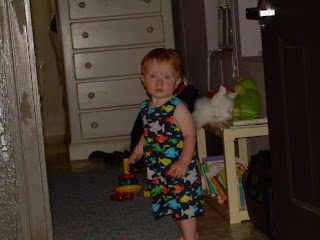 The reason we went to North Carolina was to visit our older son, his wife, and their little boy.  Anastasia is on the faculty of the Brevard Music Festival and Tom is the orchestra(s) manager and both work hard; it is no vacation.  The Festival provides them their meals in a cafeteria -- we joined them there on Friday night and it was very acceptable for institutional food, with healthy choices as well as popular foods such as burgers and fries.  The food was better than the ambiance; Tom called the place the noisy cafeteria and before long I was saying, "Named for Albert Noisy who made a large contribution to build it."  Also provided is a place to live, and the campus is pretty much pedestrian friendly.  We stayed at a nearby hotel but left Blackberry in their cabin when we went to concerts.

We attended three concerts and heard some lovely music.  The weather in Brevard is not to  my taste; far too humid and it seems to rain every afternoon or evening.  But the concerts are held in a covered pavilion, and the rain doesn't interfere. 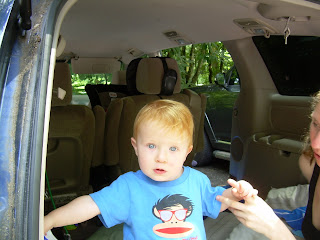 The main attraction, of course, was Nate, who is as cute as he is active!  He walks, he runs, and his fine motor skills are superb.  He can do some animal sounds and I was convinced he had a few words to say.  I know that when I see him next [not for three months], he'll have many words.  Tom said that everywhere they go people comment on Nate's red hair and ask where it came from.

Joe was a redhead when I met him (part of the reason I married him, I tell him), but he grew up in a family where the red seems to skip a generation, and he knew no one else in the family with red hair.  His sister made mean remarks to him about it.  So he's waited a long time for a family member with red hair.  And now we've got one.  And, as of this writing, in the back, it has begun to curl!

Janet O. said…
That is a precious little redhead!
There is red hair in my family, but the best I could muster was auburn highlights when I was in the sun.
Don't you love eating places where the ambiance resembles a bus station?
Sounds like talent runs in the family. I love orchestral music. I grew up playing violin, but don't get it out much now--it goes in spurts.
Wednesday, July 13, 2011 5:08:00 PM

Pat said…
So glad you had a wonderful time! Nate the Great is really getting big.

Funny story. My sister's 3rd child, Stephen, was a surprise in many ways, born almost 10 years after her 2nd, and born with a real carrot top, just like Nate. When he was just about Nate's age, we vacationed with them in North Carolina. One night, we found a real out-of-the-way BBQ place -- the kind that is way out in the county, and where people line up to wait their turn to get in. We were prolly the only Yankees there. Stephen was tired, so I was holding him, when a elderly good ol' boy in front of us struck up a conversation. After some banter back and forth, he turned to Stephen and said: "Yo mamma pick yo' outta strawberry patch, boy?" We still ask Steve that on occassion.
Wednesday, July 13, 2011 5:51:00 PM

Mrs. Goodneedle said…
My husband's grandfather was a redhead, I never met him. When Kyle was born(with a headful of RED hair) my husband's father gazed at him through the nursery window and remarked how he wished his dad was alive to see that! No skipped generation this time around though, Gregory is blessed with glorious red hair, such a beautiful blessing! I'm guessing that Nate's hair will straighten out when he's removed from the NC humidity! He is precious, Nancy!
Wednesday, July 13, 2011 6:13:00 PM

Expat Hausfrau said…
Nate is beautiful. You can say that about little boys, right? Wasn't Tom a redhead when he was little? That's how I remember him when I was his babysitter. (He's still the best kid I ever babysat!)
Thursday, July 14, 2011 2:12:00 AM