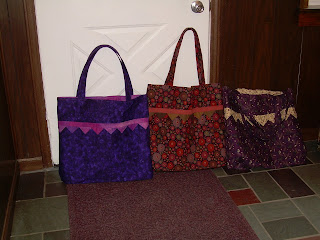 Helen had been after me to teach her how to make a big tote bag, so after a delicious dinner on Friday, that was the first order of business.  Judy and Helen are both teachers and, of course, I am not, so I was a little intimidated.  But they are good learners and shortly before breakfast on Saturday, we had these three dear bags to show for our efforts!  No, we didn't sew through the night -- I retired relatively early and they worked on other things for a while. 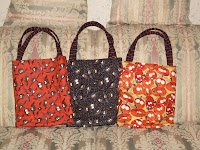 Judy and I had promised a basket to the guild for their show that is coming up in a few weeks and we decided on a Hallowe'en theme for our basket.  I bought a soft sculpture pumpkin, some skeletal stickers, a bag of good lookin' candy corn; Judy made a nifty table runner and I made a trick-or-treat bag.

The other two trick-or-treat bags are for Sam and Caroline. 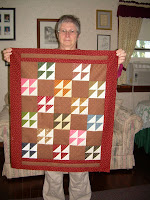 I finally got all the rows together on the Prairie Women's Journey First Project and was ready to put the border on, when I discovered I would not have enough fabric for the border.  Either I picked up the wrong fabric or I was not sent enough, or I used the wrong fabric for something else; whatever.  Upon returning home, I rediscovered the correct fabric and have begun making those borders.  There should be a finished photo soon . . . .

Fortunately, I had brought along the little kit for the second project in the series and enjoyed getting it cut and stitched together.  It finishes at 26 x 30 inches and I supposed it is meant to hang on the wall.  Not sure if I will do that or not.  In any event, it is finished, and attractive, and soon I will move onto the third project. 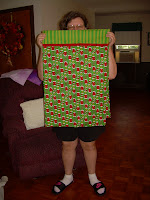 Helen was working on a variety of things, including a pair of grinchy pillowcases for one of her sons.

In Honna's and Marsha's absence, Helen provided some music for us to listen to, and we sewed along to Ol' Blue Eyes and Simon and Garfunkel and had a very pleasant time.

Carol's cuisine was as terrific as ever, and on Saturday night we tried something new, getting veggie  pizza from a little place in Quarryville; some of us pronouncing it the very best pizza we'd ever had. 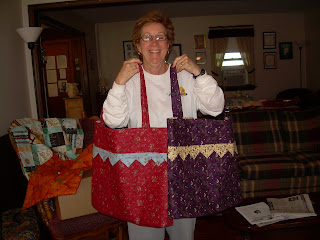 Judy liked bag-making enough to plunge into a second one after her first was finished.  We won't go into detail about what happened, but all's well that ends well, and her red and blue bag certainly did end well.

I caught up on sleep, read my book for a while each night, and took a long walk one morning. 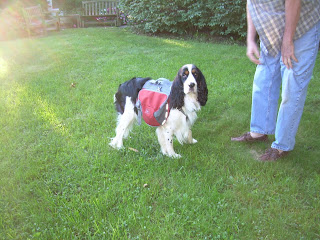 Meanwhile, Joe and Blackberry went off on their own adventure for the weekend, backpacking together in the mountains above Bloomsburg, sleeping in a tent, hiking, and cooking over a fire.  They are due home in a few hours and I'm eager to hear all about it.

Janet O. said…
What a fun weekend, Nancy. I love the unstructuredness and the good company, food and music (I could sew to Sinatra and Simon and Garfunkel--just never thought to try). You made some great looking bags and I really like the little quilt.
But Blackberry's backpack is the best of all!
Monday, September 19, 2011 2:19:00 AM

Judi said…
Oh Nancy - what a fabulous sounding weekend! I know what a special place White Oak is, and how much you love it. I am totally envious!!

You three really stitched up a storm while you were there. The bags are gorgeous and I am especially taken with your little quilt. I have been keeping an eye out for more patterns to use for baby quilts and I thinkt hat would do nicely!
Friday, September 23, 2011 6:40:00 AM