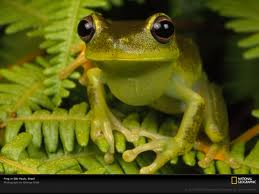 It's been a summer like no other that I can remember, Near Philadelphia.  We've had weeks of top-of-the-chart temperatures, a hurricane, an earthquake or two, and unprecedented rainfall leading to dangerous flooding in some parts of the area (so far, not my particular location). The other day during a period of relative calm, Joe thought it would be good to clean the downspouts.  Which led to his cleaning the window wells.  In one of them he encountered a very, very small frog* (who, it must be told, was not overjoyed to make Joe's acquaintance).  We've had bunnies, skunks, deer, turtles, possums, racoons, and even a turtle or so.  But never before a genuine frog.
I'm convinced this guy is the start of the next plague.

*The frog pictured is not the actual one Joe met.  They both declined to pose for a photo.
Email Post

*karendianne. said…
I'm starting to think you live in the tropics and I live in the desert. It's all 6's and 9's isn't it? Poor little froggie. You know, Bodacious might like to give chase. Kanga and Kipling find this activity quite fun. Personally I feel it's torturous and need to intervene.
Thursday, September 08, 2011 11:14:00 AM

Janet O. said…
Frogs, locust--anyone want to predict the next plague?
We have tree frogs in the pasture across the street. Boy, are they noisy at night!
Thursday, September 08, 2011 1:37:00 PM

Anonymous said…
I've lived in Phoenix all my life (just had my 50th birthday), but about a year and a half ago, my DH and I moved close to a mountain preserve in the middle of this big city. We have encountered soooo much wildlife (cottontails, quail, dove, great horned owls, turkey vultures, red-tailed hawks, jack rabbits, lizards of every variety, snakes, bats, ducks, raccoons, rats, mice, chipmunks, squirrels...[I'm sure I'm leaving something out]). We have a natural wash that passes right behind our property and we hike a lot on the preserve, so we have come up close and personal with many of these critters. God's creation is amazing. I just used to have to get out of the city, at least I thought I did, to experience the animals that He has placed here. Who knew that all of this existed in this vast expanse of rooftops.

Anonymous said…
I was surprised by a tree frog clinging to the inside of my COMPOST bin the other day! (It must eat the worms) - It reminded me of the one I found living in a birdhouse last year - so funny to watch froggy hanging out in the hole day after day!
As long as your frog wasn't the two-headed 6-footed variety why worry?
Thursday, September 08, 2011 4:03:00 PM

Sandy H said…
I've found two or three little tree peeper frogs climbing up my patio screen door and the front door this summer, going after the bugs. Plagues, indeed. As long as one plague eats the other one, though, I'm happy enough. (Is that biblical? "And then came the sixth plague, which did so munch on the fifth plague and smacked its lips most heartily after. Selah.")
Thursday, September 08, 2011 10:19:00 PM