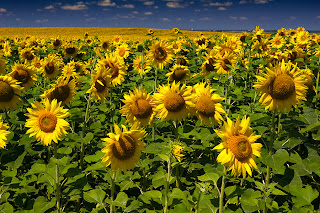 Joe had bought a short series of Chamber Orchestra tickets and last evening was the first concert.  Since we seldom go downtown alone together, we decided to go to dinner before the concert, and were delighted to discover that it is "Restaurant Week" in Philadelphia, a week when many restaurants offer a prix fixe menu as a way of enticing new patrons to give them a try.  Joe was interested in Italian food and I was interested in something close to the Kimmel Center and we found both in a delightful new [to us] place, Girasole.

It's a small place, although in the nice weather they have tables outside as well as inside.  The decor is nothing to blog about, except that on one of the walls was a large mural of sunflowers.  Girasole, I've learned is the Italian word for sunflowers.  For the first course, we each had a different carapaccio, and they were delicious.  My second course was a pasta dish and Joe's was salmon; we both had a unique toasted-almond infused ice cream for dessert.  The food was very good, and the portions were perfect.

I was really pleased with the service.  The wait staff were very pleasant.  They were not snooty, nor did they call us "guys."  They were knowledgable and considerate without hovering.  There weren't many people in the restaurant (we had an early dining time since our concert began at 7:30) and when the men next to us were served a salt-crusted fish preparation, we watched with fascination as the waiter carved and served it.  Timing was flawless, the pinot noir was smooth, and a lovely time was had by all, including the men with the fish who were friendly almost to the point of offering us a taste!

Would we go back?  We surely will.  They have a prix fixe pre-theater menu even when it is not Restaurant Week and they're one block from the orchestra hall.  No affiliation, yadda yadda; just  looking to share a good spot with good friends.  You might want to give Girasole a try if you're hungry in Philly.

Paula, the quilter said…
I thoroughly dislike being called a guy. It sounds like you had a wonderful time.
Tuesday, September 20, 2011 8:56:00 PM

Annemiek said…
Love the picture. It reminds me of France:)
I skipped the rest of the post; i'm on a diet and dream about delicious things to put in my mouth (and eventually on my hips)
Wednesday, September 21, 2011 10:27:00 AM

Judi said…
By a very happy coincidence, I have just booked hotel rooms so that we can stay in Philly for the last few days of our holiday next year, so I'm busily making notes!
Friday, September 23, 2011 6:36:00 AM