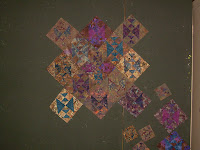 Well, friends, a lot of you had really good ideas for making Muddy and Murky more palatable and some of them had the potential for a nice-looking project.

I wish I had the enthusiasm to take on one or two of those good ideas.  But I don't.  And I suspect that if I put them away again and hope for the interest to germinate, it won't.

So . . . Muddy and Murky blocks are up for grabs.  Here's the deal:  If you commented previously on the original post and want them, leave a comment of "Count Me In" and if you didn't comment previously but want them now, leave a comment telling me what you would do with them.  Tomorrow night, i.e., Monday evening, I'll do a random pick.  The people who commented earlier get two chances and the new commenters get one.

So, think hard!  These Muddy and Murky blocks could be headed your way on Tuesday!

Lynda Halliger Otvos (Lynda M O) said…
The colors dominant in M & M are the same ones in my living room couch, paneling (we love the cave look) and wooden floor. I will turn the squares into a throw for the living room and return the purple quilt (from you & hgtv) back to its favorite location on my bed. We just got the sewing machine unearthed into the newly painted studio. Yay !~!
Sunday, September 04, 2011 11:47:00 AM

Anonymous said…
Of course you can count me in. I would love to have something made by you. My family room is the M & M colors. I will put strips of a light color around the blocks and snuggle up with a piece of home! Love, your CA cuz
Sunday, September 04, 2011 12:16:00 PM

Marge said…
Nancy I think I would add a sashing to separate the blocks and put it in our "second beginnings" charity quilts. These go to teen age mothers who continue their education within the school system. When they graduate all the children of these students are presented with a quilt. It is something I admire about these students. Would love chance to win these lovely blocks.

Anonymous said…
Good for you for moving along blocks that no longer inspire you to someone who is inspired by them. I bet someone will create something wonderful with your blocks.
Sunday, September 04, 2011 1:17:00 PM

Kathy said…
Oh my! I finally figured out how to comment! I would do bighter blocks next to the M&M in the same pattern to bring out the colors.

BTW - I have the same dilemna with some blocks but with a bright background and bright pieced stars. I call it "Hidden Star". Same kind of problem!
Sunday, September 04, 2011 2:48:00 PM

Anonymous said…
I didn't comment previously, as there were so many good ideas already! I would use the blocks to make a quilt for the prayer quilt ministry at my church. We give prayer quilts to people going through a health crisis, or another kind of need.
Christy
Sunday, September 04, 2011 2:56:00 PM

Wendy said…
The batiks used in M & M are fantastic! I would add some of my own batiks to round out the quilt top....then add borders and quilt.. I would love to own these to make myself a quilt....batiks are one of my favorite fabrics and these are sooooo yummy! I found your blog by way of Chookyblue.....
Sunday, September 04, 2011 9:30:00 PM

quiltmom anna said…
Well, Nancy, I love the colors and I am sure they would make a fabulous quilt- perhaps some sashing to separate them or zinger fabric or another contrasting fabric to set them off.. Someone is going to have a great deal of fun playing...
Regards,
Anna
Monday, September 05, 2011 3:45:00 AM