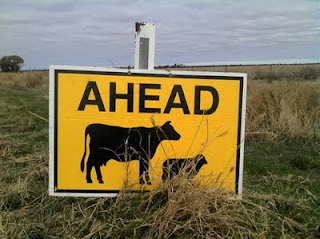 And cranky is putting it mildly.  The truth involves language I don't normally use.  My fourteen-month-old Dell Inspiron laptop appears to be suffering from backlight demise or some other godawful malady.  Very much like what had killed off my beloved Toshiba.

When the Toshiba got all dark around the screen, I went and bought the Dell, only to learn later on that she might well have been repaired at a moderate cost to me.  I wish I had done that because despite its purpleness, I've never been all that fond of the Dell.

I don't have the money to buy a new computer at present, so I suppose I'm going to have to take the Dell up to the Geek Squad and see what they can do and for how much.  And I have too much going on to even attempt that until the weekend, it seems.

Diane said…
oh man I feel your pain...computer trouble can make you cranky and want to puke, really. I just had to get a new laptop after suffering with my desktop as it spent months deciding if it really wanted to live, die or be thrown out the gosh darn window.
Wednesday, September 21, 2011 12:29:00 PM

floribunda said…
Ha -- I just ordered a new laptop for work and finally broke away from Dell's stranglehold! We'll see if Lenovo is any better. The Dell is only 5 years old but has been acting up for the last couple of years. Good luck with the geek squad.
Wednesday, September 21, 2011 2:17:00 PM

Annemiek said…
My old one was stolen from my house while I was sound asleep. People ask me if I'm scared now in my home after that burglary. No, I'm just mad, furious and SHOULD that criminal return to snatch my NEW laptop, I'll just bite his/her head of!!
Hope your Dell will recover soon
Wednesday, September 21, 2011 2:52:00 PM

Kim G. said…
I know where you are coming from, had my own computer "issues" not too long ago. Before you go to "the Squad", see if you can find a small local computer fix-it guy/gal. It saved my a LOT of money. The big box guys wanted $200 before they would even look at it! Got it fixed locally for less than $40!
Wednesday, September 21, 2011 5:40:00 PM