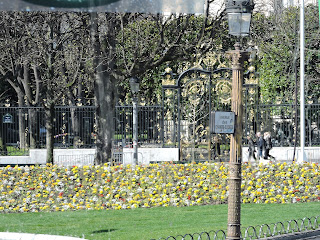 Monday morning we had breakfast at our hotel before joining the dozen or so other pre-cruise participants for a morning's tour. We piled into a bus and spent an hour or so seeing some of the main attractions of Paris, driving past the Louvre, the Champs-Elysses, the Arc d'triumph. We saw the famous opera house and, of course, music from Phantom began to go through my head. Then we saw where the Bastille had been and Les Miz replaced the Phantom. After a while, the bus dropped us of in the Le Marais area and our most capable guide took us hither and yon, showing us historic buildings and explaining how the aristocracy had lived. 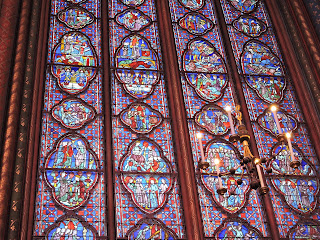 After lunch, it was time to go off church-seeking. Joe had studied Sainte-Chapelle when he was in architecture school, and experiencing this church and the astonishing stained glass was a high priority. The Paris Metro puts the Philadelphia area public transportation system to shame; we had purchased a Paris Pass that gave us unlimited use of the Metro, and Joe quickly understood how it functioned and before we knew it we were in the area of the churches. There was a long line at Sainte-Chapelle, but we persevered and soon we were inside amidst the beauty of the glass. If stained glass is your thing, friend, this is the place to go. 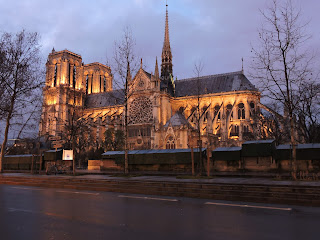 And then it was time to make our way to Notre Dame of Paris. There was a worship service going on when we got inside, and we weren't able to go everywhere that Joe wanted to go. I sat and listened to the music of the service while he explored and photographed.

We had a rather frightening experience as we were leaving. In the past we have noticed enormous groups of loud, rude, and actually downright obnoxious Chinese tourists. We encountered them everywhere we went last year in Scandinavia and while both of us know it isn't good to go in for overly broad cultural generalizations, we were troubled when yet another horde would descend upon a place we were visiting. There was a large group of these tourists trying to leave the church at the same time we were, and it became very crowded and shoving and pushing began as we funneled our way toward the single open exit door. I was very nervous; I kept thinking that it wouldn't take much at all for a tragic stampede to occur. At last we reached the door and discovered that part of the problem was that someone had been trying to bring a wheel-chair occupant in through this little exit door.

Heaving a huge sigh of relief when we finally emerged, we wandered around the neighborhood until we found a cafe where we had a wonderful French dinner of onion soup (five stars), beef bourguignon (just as delicious), and creme brûlée.

On Tuesday morning we were up early once again because we wanted to visit the resistance museum. We had visited the one in Oslo and been very impressed, and we wanted to learn about the French resistance. Our niece Abby indicated that she also wanted to go, so we arranged to meet her there at ten o'clock. Transportation to the museum was complicated and while we never got lost or took a wrong train, we were forty-five minutes late and had no way to contact Abby. Arriving at the museum  just before eleven, we found that we were the first visitors of the day, that a young student had not been there, and they didn't take credit cards! I sat down to wait while Joe trudged down into the village in search of an ATM machine. It was another forty-five minutes until he returned. The receptionist had only about as much English as I had French, so there was no conversation. I was glad I had my phone with a sudoku game to entertain me. When Joe got back, we paid our entry fee, only to discover that everything in the museum was in French; there was no English whatsoever! Nonetheless, we spent the better part of an hour wandering around, and then took the bus and trains back into town.

After lunch, Joe thought he would like to visit the Arc de Triomphe, so we went over there and learned that entry was closed until 2:30. Our Paris Pass meant we didn't have to buy tickets, so we by-passed that line and were first to enter once it reopened. We had to go through security before getting on the elevator to the top and I had no way of knowing that once we went through that final door, there was no elevator. Rather, there were 284 steps!


I could almost feel my Fitbit pounding against my clavicle. Going down was a bit easier than going up, but I'm no fan of circular staircases.

Back at the hotel, a message from Abby indicated that she'd loved the resistance museum -- she had gone to a different one than we had! Who knew? Reassured that she was safe, we took a much-needed nap because we had big plans for the evening. Joe had come to Paris to visit cathedrals. I had an entirely different agenda!

Anonymous said…
Comte cheese is AWESOME - you can buy it at DiBruno Brothers, Chestnut Hill Cheese shop, or The Market in Lafayette Hill. Paris is still on my list
Monday, April 11, 2016 4:26:00 PM

Quiltdivajulie said…
My knees ache thinking about all those stairs - up and down. Looking forward to hearing more about your adventures.
Monday, April 11, 2016 7:49:00 PM

Barbara Anne said…
What (mostly) lovely adventures you two had!! I prefer to avoid pushy crowds, too. Shudder ...

As always, your pictures are wonderful! IMHO, your photo of the 284 steps is worthy of framing.