Another Sacred Space and the Real Purpose of the Trip 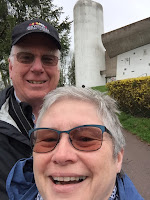 Sometime in 1968, when we'd been married for not quite a year, were very poor, and living in Navy enlisted housing that had been built around 1940, Himself showed me a picture in an architecture magazine. It was a picture of a church (this is when it all started, I guess) that he liked, by an architect that he admired. He thought I would like to see it; he thought I might like it, too. He was right on both counts. I liked it. A lot. It was different from other churches. I remember our mentioning right then and there that we thought we might like to go visit that church one day.

Swiss architect Le Corbusier's masterpiece, Notre-Dame du Haut, located in Ronchamps, France, was completed in 1954. Located adjacent to a Poor Clares convent, it was created to replace a chapel that had been destroyed during the Second World War. Joe discovered it fourteen years later. And forty-eight years after that, we visited.

This chapel is a world-renowned architectural masterpiece. It is a pilgrimage place for both the faithful (August 15 and September 8 are the feast days) and for architects from all over. In a few months UNESCO will announce the decision about whether it is to become a World Heritage Site. Notre-Dame du Haut is visited by thousands of people every years.

And yet the day we visited, we were alone for almost the duration of our stay. A small group of young elementary school students was finishing their visit as we arrived and a larger group of older students came as we were leaving. But, incredibly, for about an hour, we were alone in and around the church. Forty-eight years. Is anything ever worth that kind of a wait? 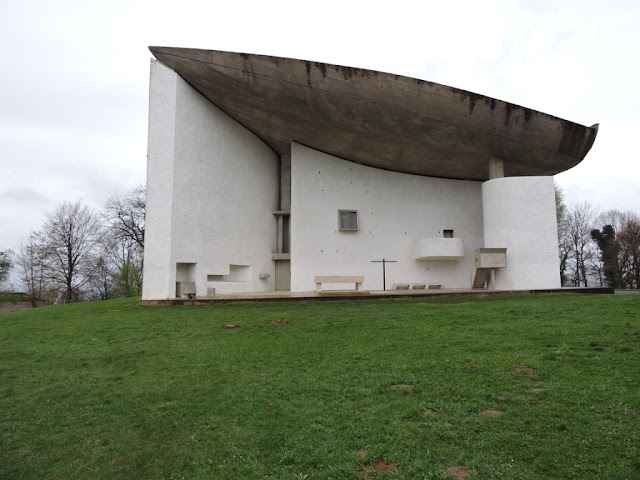 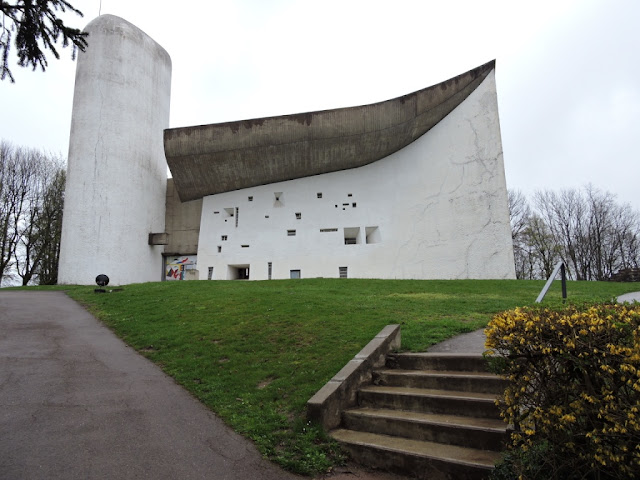 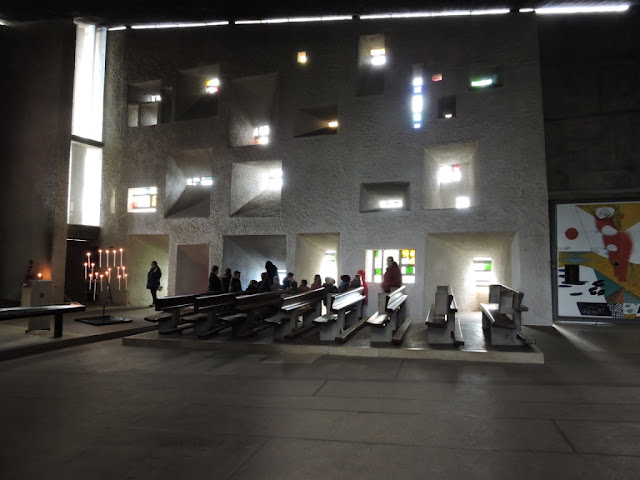 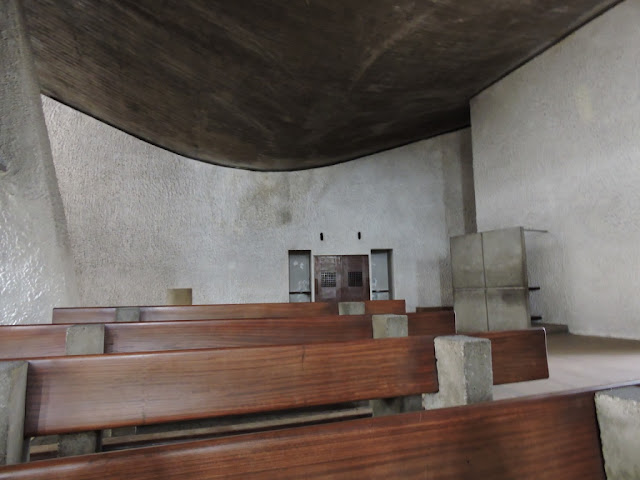 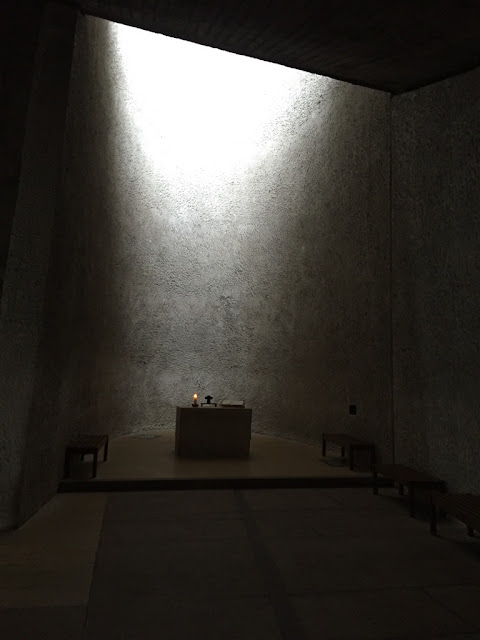 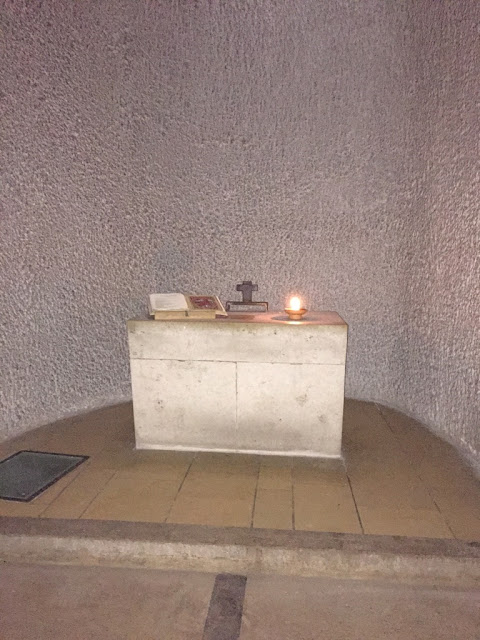 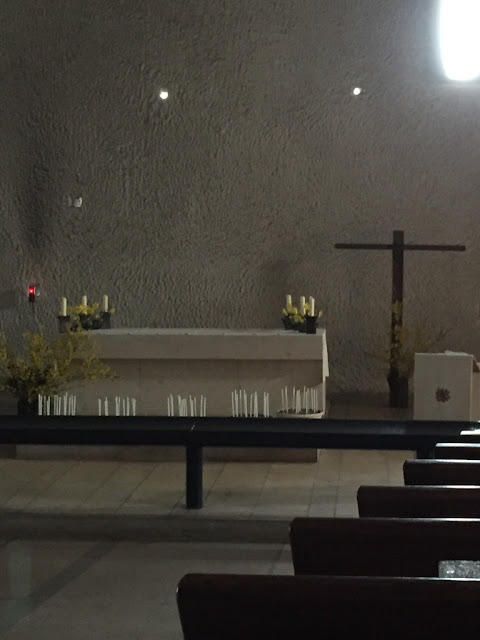 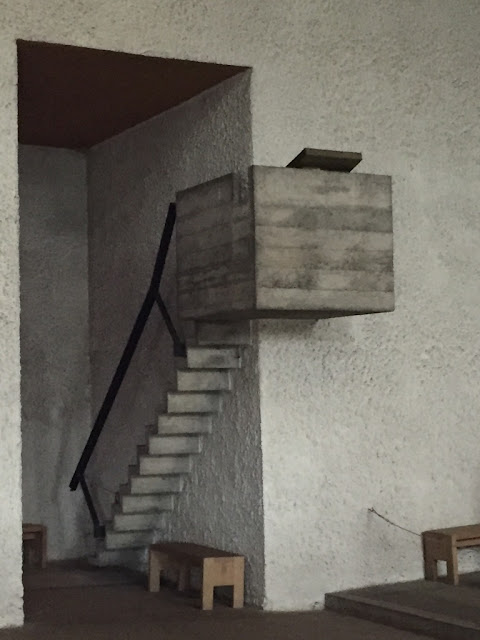 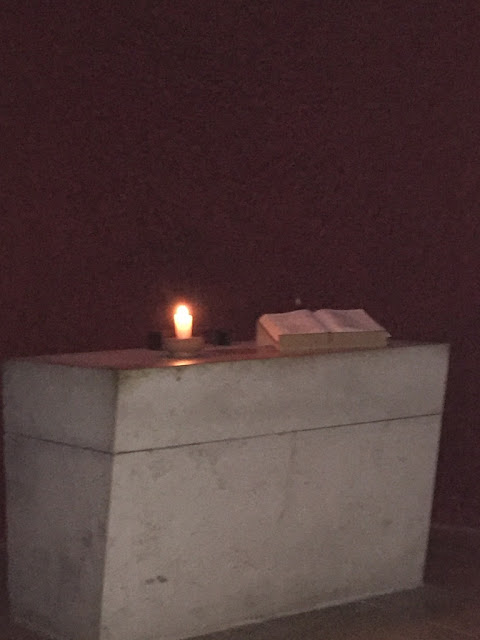 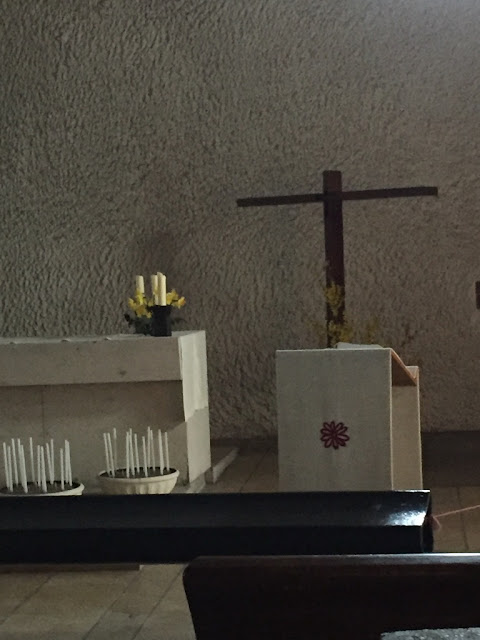 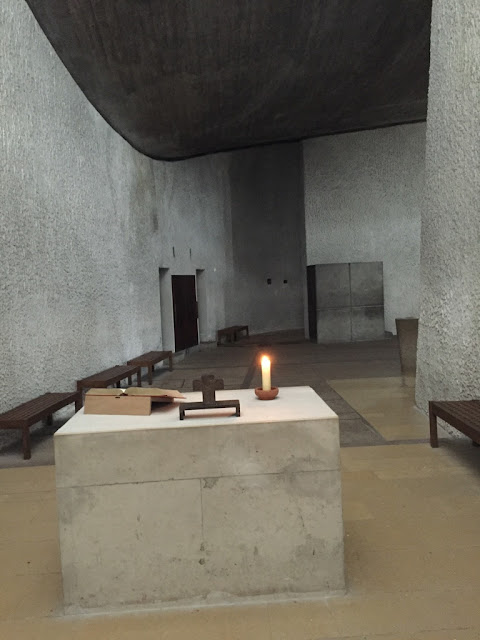 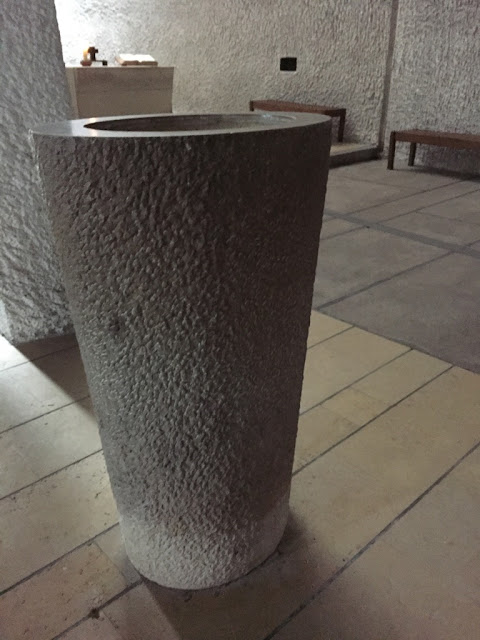 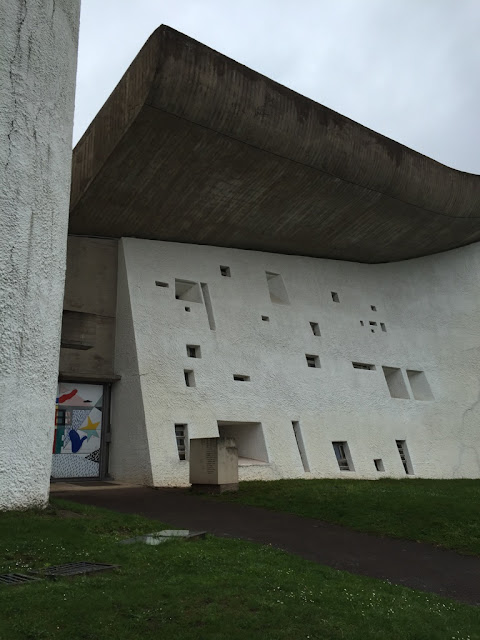 Millie said…
YES, YES, YES and YES!!! I adore architecture, and I recognized this building before I read a word of your post. Such a beautiful building, inside and out. I am glad you were able to visit, and also glad you got to spend time there without a lot of folks milling about.

Karla said…
I love dreams and I love that a beautiful couple fufilled a romantic dream. Thanks for sharing that little piece of you and Himself.
❤️
Thursday, April 21, 2016 7:48:00 AM

Barbara Anne said…
What an inspirational exterior and interior this wonderful church has. The well-placed windows beautifully cast light inside. Mr. Le Corbusier's design was/is so perfect in every way. Memorable, indeed, and so worth the long-awaited journey. What an special gift and blessing to be virtually alone during your visit.

OTquilter said…
How wonderful to hold onto a dream for so long, and to have it fulfilled in such a perfect way; having time alone to experience the space must have been thrilling and humbling. Thanks, again, for taking us along.
Thursday, April 21, 2016 9:47:00 AM

Janet O. said…
Looks like an incredible place. How very appropriate that you had the place to yourself as you fulfilled your dream. I can feel the hush and the awe through the photos. Can I use the word "amazing" here? : )
Thursday, April 21, 2016 4:15:00 PM

Jo said…
Nancy, have been following your blog for years and have been part of your swaps. These pics blew me away. I attended st Brendan's school in the Bronx, the architecture has so many similarities -brought me back to the church of my preteens. Loved your story (as always), of coming full circle.
Thursday, April 21, 2016 9:28:00 PM

Lori said…
How exciting 48 years later! And to have it mostly to yourself! How perfect. I have to admit, I've never heard of this church. Looks so beautiful but primitive and rustic at the same time.
Friday, April 22, 2016 10:42:00 AM