On Wednesday morning, we had our final delicious breakfast (Eggs Benedict, anyone?) aboard Rinda. We'd been well-fed and well cared for during the week we spent with Viking. I'd unhesitatingly recommend them to anyone. Then it was into a waiting cab and off to the main railway station. Our first task was to find a computer kiosk and enter our credit card to retrieve our tickets for the day. We did that with more ease than we'd anticipated. We'd be needing tickets again the next day, but decided to let that wait.

The train terminal was very interesting. This gorgeous woman was seated across from us much of the time that we were there. She didn't know I was taking her picture, but I couldn't resist. Every now and again a group of three French army soldiers would walk by, just perusing the scene. We had a lunch and then it was time to board the first of two trains to our next, long-awaited destination. 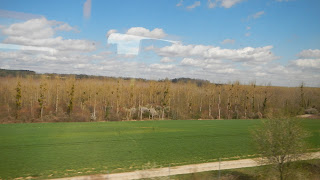 The French countryside was very pretty and the train ride was comfortable. When we got to the junction where we needed to change trains, we had just five minutes to spare. We looked around and then asked an official-looking person who told us that the train we wanted had been replaced by a bus! We followed him down the steps to the street level and he helped us find our bus. There weren't many people aboard, and we settled in right near the driver. And then began a long, winding journey through the country, seeing many, many cows, sheep, chickens, darling houses, and lovely scenery.

When the bus made its first stop at a modest little station, it occurred to us that perhaps we should have obtained tomorrow's tickets from that kiosk. What if the station in the morning were to be like this one? The next stop had a building, at least, and the driver said there was a six-minute wait until he'd pull out. So we went into the building in search of a kiosk or a ticket agent. There was none to be found. We were to do this at several more stations before we discovered -- on a four-minute stop -- a place with a ticket agent who had approximately as much English as Joe and I had French, i.e., twelve words total. With great difficulty, Joe was able to explain to him that we needed to get the tickets for tomorrow's journey; I was watching the clock and was very, very nervous. At last I went outside to the bus and waited there with my eye on our luggage. The driver looked like he was getting ready to pull out and I implored him to honk the horn. He laughed a little and honked. And before much longer, Joe came running out of the station, tickets in hand. The driver asked us if we were planning to stay at the bed and breakfast inn once we got to our destination, and when we told him we were, he offered to take us right there rather than leave us at the bus stop. When we got out, Joe offered him a tip -- he'd been so kind to us -- but he declined and just helped us unload our luggage. We thought he'd have a good story to tell at dinner that night.

And then we got to the bed and breakfast.

Hotes du Parc, not to put too fine a point on it, is simply the most exquisite place we've ever stayed. The house is beautifully restored and decorated. The breakfast is delicious and ample. The gardens are gorgeous. The host, Emmanuel, is hospitable, accommodating, and charming. Our regret is that we did not book more than one night at this enchanting place. After a very nice dinner at a nearby restaurant, we opened our window and fell sound asleep listening to the stream below. 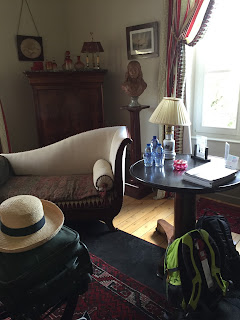 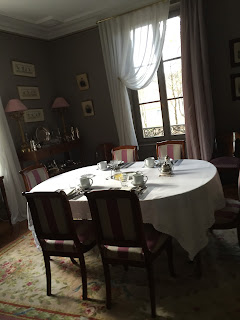 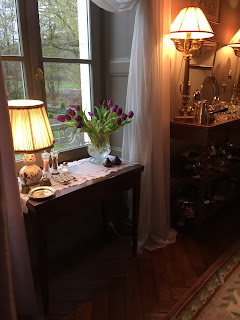 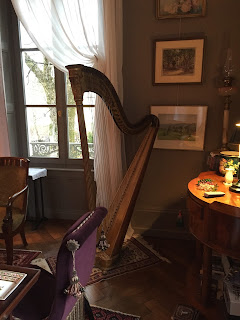 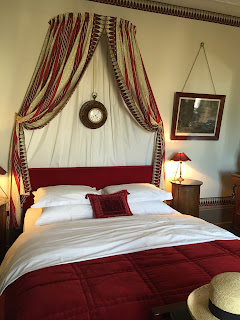 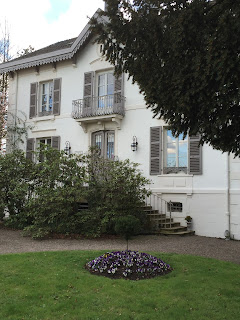 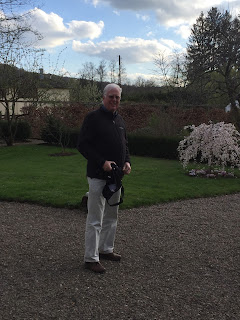 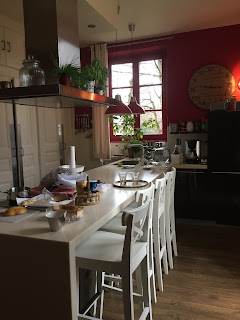 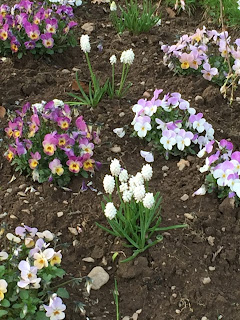 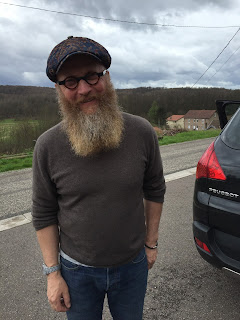 Barbara Anne said…
How wonderful that you and Joe are very adept travelers and sense when to ask questions along with what to look out for. Your day might have not gone so well had you missed the bus or missed getting the tickets for the next day. Well done! Kudos for the kindness of strangers, too, of course.

What wonderful photos, interesting narrative, and that B&B is amazing. Well done, Emmanuel! Do you suppose you and Joe will return to this very place and that very B&B on future journeys?