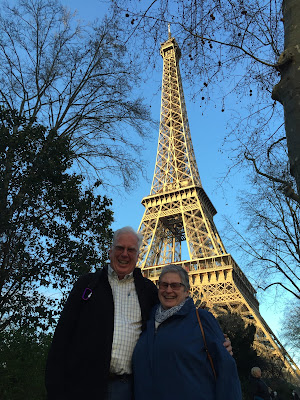 Somebody observed that this blog's been quiet for a couple of weeks and that must mean that I've been away.

I hadn't planned to go to Paris. I just didn't think I needed to. And five seasons of commercials on Downton Abbey had convinced me that Viking riverboats were the second ugliest things I'd ever seen. But Joe had a hankering to see St. Chapelle and there was another place not far from Paris that both of us wanted to visit. So when the postcard from Viking showed up in our mailbox, the postcard offering two-for-the-price-of-one booking rate along with round trip airfare for $95 per person, I contacted Emily, my cousin/travel agent, and she responded that this was, indeed, a marvelous deal and we should go for it. So we did.

And we are glad we did. 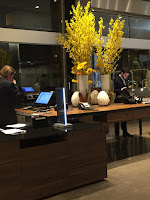 Viking wisely offered a pre-cruise stay in the city, and we wisely accepted that offer, spending three nights at the Pullman Paris Eiffel Tower hotel, literally a block or two from said tower and -- more important -- from the Metro stop. With just 23 rooms and a contemporary design, the Pullman was a perfect choice for us. I admired the design of the lobby with the reception area an island rather than up against a wall on the side. Viking had met us at the airport, delivered us to the hotel, provided a delightful rep who had a desk and regular hours in the lobby, and arranged a city tour for us. But I'm getting a bit ahead of myself.

We checked in, had a little nap and in short order were ready to go adventuring! 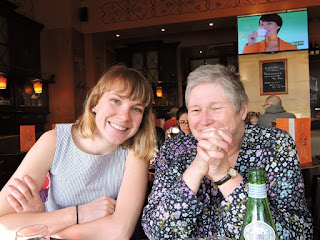 Our adorable niece Abby is spending a semester in the City of Light and we took a cab ride out to meet her at a museum the family calls The Little Gnome after someone once misheard "little known."   The line to enter this little known place surprised us; it was Easter Sunday and I hypothesized that a pilgrimage might be a little known holiday tradition, but it turned out that there was a special exhibit in addition to the Monet water lilies that had drawn us to the place. Abby spotted us in the line and gave us such a warm welcome! We did the complete tour and I paid special attention to the Monets, knowing they were a bit of a foretaste of the feast to come.

We found a little cafe for an early dinner. Abby introduced us to France's basic lunch food: a Croque Monsieur, far more enjoyable than U.S.'s Big Mac, and taught us a handful of useful phrases (Joe had retained only a tiny bit of his ancient high school French and I had little more than Bon Appetit!). Then we had our first Paris crepes which Abby pronounced good, but not as good as "the kind you get from a stand on the street, kind of wrapped in newspaper," and called it a night.

Janet O. said…
Sounds like a really good deal! Paris--what a delightful destination. That is extra special to have a family member there to visit.
Look forward to hearing more about your experience. So far, so good!
Monday, April 11, 2016 1:10:00 AM

Barbara Anne said…
Lovely pictures, lovely deal for this lovely trip, and - bonus - you got to visit with Abby!

I, too, suspected y'all had departed for parts unannounced and I wondered where in the world you'd gone. :) Likewise, I look forward to hearing all about it!!

Is it time to say Welcome Home?

Lorraine said…
How lucky can you be? I love reading your travel adventures esp. the one to Norway. It is on our travel list because of you and Pinterest!!

Quiltdivajulie said…
Fabulous tour opportunity -- I think we are ALL in for a treat as you shared your photos and stories!
Tuesday, April 12, 2016 8:52:00 AM