Back to Italy: Part Four 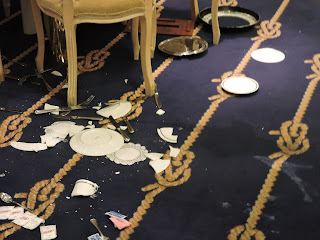 Our last port was Positano, and when we pulled in, the weather was iffy, to say the least. Joe and I had nice memories of Positano from a previous trip and decided to take the tender from Star Flyer to the shore. It was a bumpy ride. We walked for just a little while, then stopped at a cafe for a light lunch. After lunch, Joe went on to visit the church and for once, I declined. I headed back to the dock and boarded the tender. The ride back to the ship was so rough that when we arrived, I was wet all the way through from the sea splashing against the side of the tender. I was relieved when Joe finally returned on the last tender before sail-away.

The storm began in earnest an hour or so before dinner was to be served. We were in the cabin and the ship was rolling around in the sea; water was beating against the porthole and it was sometimes unclear whether it was rain or waves. I crawled over to the porthole side of the bed to take a closer look; Joe looked, too, and decided he just had to go up to the deck -- a storm at sea -- how could he resist? After he left, I had to work very, very hard to crawl back to the other side of the bed. The sea was so very rough. I was glad I had had my shower earlier; I surely would have fallen down.

In time things settled down and Joe returned with reports of a broken boom and shredded sails. He said that when he was passing through the dining room, the tables which had been set up for dinner, were shooting glassware, china and cutlery to the floor. Then came the announcement through the public address system. In the calmest possible voice we were informed, "Dinner tonight will begin at 8:30 rather than 7:30."

The next morning, the cruise director reported that he'd been sailing for 28 years and had never experienced a storm of that magnitude.