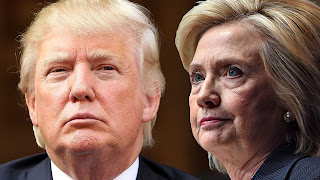 I am convinced that this election cycle is providing a negative and frightening undergirding to all of American life. People seem to me to be edgy, depressed, defensive and aggressive, all at the same time. This morning at breakfast, Himself and I talked about it; we both will be so glad -- we think -- when it is all over. The ugliness -- and not just on one side -- is beyond anything I've ever seen before on a national stage.

There are, of course, other things going on in my life. And everything seems to be colored by my despair over this election. Some weeks ago, for no apparent reason, all of the links on my blog disappeared. So I'm not reading the things that usually pick me up when I'm down. And I seem to lack the energy to go look them all up and re-establish my blog roll. Update: A wonderful person (see comments below) showed me how to re-establish my links! Wasn't that a kind thing for her to do? And speaking of blog, that which used to be so important to me, I can barely find the energy to do the Just 80 Minutes updates, much less write about our Italy trip and other things that usually fill my posts. The refugee resettlement project is undergoing some snags; there is confusion and there are some communication problems; things that normally people would take in stride, but some are now irrationally attacking the project's leader. Today, a stop sign issue (where I swear I was in the right) colored my entire morning, and it wasn't a pretty, rosy color.

My neighbor, a rational woman and former Bernie supporter, said to me, "But Nancy, Hillary is a flawed candidate." I agree. But the alternative is unthinkable.

I'll be back to blogging at some point. I hope it's sooner rather than later. But I don't know; I can't seem to shake this awful feeling of dread.

So, in the meantime, all I can do is to urge everyone to support The Flamingo Party. That's what my family is doing. As someone once said, "What do you have to lose?" 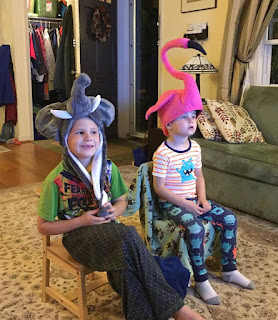 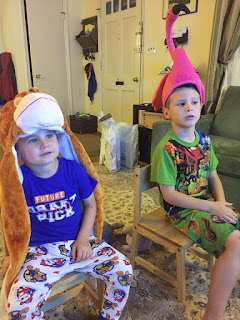 Karen's Quilts from Cape Town said…
Hi Nancy, I felt my arm was chopped off when the blog links disappeared, so waited a couple of days, and then went looking for them! Found this site helped: https://archive.org/web/ Added a gadget back on my site and, albeit with a bit of tweaking, put back the links. I've now got them in list elsewhere in case it happens again! Please keep writing! Cheers, Karen
Thursday, October 20, 2016 12:50:00 PM

Quiltdivajulie said…
I agree that the election cycle is affecting each and every one of us. Never mind that early voting has started and many of us have already cast our ballots ... Last night's "debate" left me feeling truly scared. I've been angry/upset with various candidate statements over the years, but never down-to-my-toes scared. Like you and Joe, we've been looking forward to moving past this year's election process. Now even that has been thrown into doubt. For the sake of all that is good in this world, please keep blogging about what is kind and helpful, thoughtful and insightful, colorful and satisfying -- we all need it more than ever. That was my plan when I started blogging and that approach seems more important than ever these days. (and I use Bloglovin to keep track of my links -- haven't used Google's version for years)
Thursday, October 20, 2016 2:29:00 PM

Leslie said…
I am fairly new to your blog but I really hope when this awful election is over we can all take a shower to wash off the slime and move on. I have also been quite depressed over the comments on my FB page and have therefore stopped commenting on anything. I have been spending more time than usual in my workroom and really feel the rhythm of the machine and repetitive sewing has settled my mind. And I take my dog on lots of walks and stop to appreciate the beauty of nature. I hope this helps you to know many people are feeling your angst. Please take the time to recharge and then I hope you return soon to blogging. Your thoughts and quilts will be missed. #I'mwithHer too

Anonymous said…
Please keep on blogging! All we have control over in this world is ourselves, and I believe that being kind and creative makes a difference.
Thursday, October 20, 2016 10:55:00 PM

Shasta Matova said…
Looks like you found your blog roll. In case you haven't, it's at the bottom of the blog - just a small formatting issue. It's all a dream, and we will wake up out of it soon, like Bob Newhart.
Thursday, October 20, 2016 11:35:00 PM

Carol- Beads and Birds said…
I see things others don't in Hillary. Some call her dishonest and a liar. Well I think we ALL hide from the public what we don't want them to see. I also think there is not one politician that doesn't. What I find despairing in this election is that it has somehow unleased, by SOMEONE, the biggoted opinions that many have been hiding. I live in Northern Indiana in what used to be the HUB of the KKK in the State. The Grand Dragon lived just 3 miles from me, as the crow files. The activities on his farm were tamped down and we didn't hear much about that organization in the past years, but here it is back, alive and well. My State gave Pence to Trump. Good Riddance. I am campaigning hard for the candidate that is running against his replacement.

People like you and I cannot let the political trend in this country get us down or they win. I was speaking about your refuge project the other day. I hope that works out.

Our lives seem to take spurts of happy and then of trial. That's what I like to call them...trials of our sanity. Keep your sanity and persevere. Those pics of the kids are soooo cool!! Love the head wear. Turn the TV off a while and enjoy the fun. Just like a fart, the next few weeks will pass and we'll feel relieved.
xx, Carol
Friday, October 21, 2016 8:47:00 AM

Sue said…
Oh Nancy, just reading that I am not alone feeling this horrid depression has helped me. As someone who has what I have always considered to be good mental health, I have considered seeing a therapist. It has never occurred to me before even at difficult times in my life, but this cloud just won't seem to lift. Like you, I am hopeful that all will be better after the election but I expect it will take a long time to heal all of us.
Yes, she has made mistakes but does she have the intelligence, experience and strength to govern this country. Oh yes.
We can get through this. Closing the door to my sewing room and diving into a project does help.
Thanks for sharing your feelings; it does help me to know I'm not the only one.
SSS
Friday, October 21, 2016 9:04:00 AM

Barbara Anne said…
Sweet Nancy, can you and others scoot over a wee bit so I can join y'all on the scared sh**less bench? Thank you! DH and I both are heartily miserable at the horror of this election. Indeed, Hillary isn't perfect, but she has an unbroken history of working for kids and families, of public service, and has NOT insulted every part of the population except for white heterosexual males as her opponent has (and in the rudest, crudest ways possible, I might add).

Brenda said…
Your election dominates much of the news in Canada too and we can't do anything except watch. As for taking a blogging break, I think that's OK. Blogging should give you energy, not be a burden. come back when you're ready. FYI: I'm using your tutorial on the H symbol to make a block for my son, a political science student who is totally engaged in your election.
Friday, October 21, 2016 12:23:00 PM

LoieJ said…
Hi after a reading absence of a few weeks when we were on a mini vacation and then visiting family. I read a number of blogs, but I haven't kept mine up in a few years. I use a feed reader to know when a blogger has posted. That way I don't have to go to each blog to check. Granted, looking directly at a real blog is visually better, but with moderately not-fast 'net, and not wanting to open and reopen blogs with no new postings, yet not wanting to miss those posts from writers who just post now and then, a feed reader is a great way to keep reading. So today, here I am, opening your real blog so I can post. I saw all the 80 min updates on the reader. You are undoubtedly more focused than I'll ever be, so you get lots done. I'm always impressed at your accomplishments, both sewing and philosophically (politically, writing, serving others)
thanks for being a blogger!
Saturday, October 22, 2016 12:44:00 PM

Unknown said…
Hello Everybody!!!
Can you give me some minutes for introduct my service? I'm providing:cool: máy tập bụng | and máy tập cơ bụng New Six Pack Care đạp chân | and special is xe đạp tập thể dục | and máy xay đậu nành | and máy xay sinh tố | and máy tập bụng SIXPACKCARE 2018 | and máy ép miệng cốc D6. Contact with me.
Thanks for reading! And have a good day!
Monday, October 24, 2016 3:14:00 AM