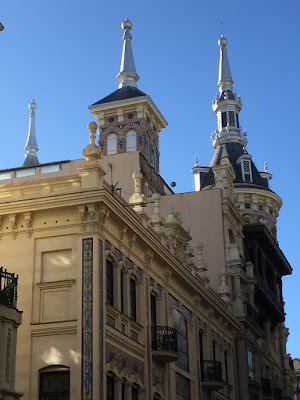 I woke to a beautiful day on November 7. Gran Canaria was warm and lovely. I walked from my hotel to a sister property a block away for breakfast and soon it was time to leave for the airport.

The flight to Madrid was uneventful. The head cold that had begun the previous day had settled in, but it wasn't intense. The airplane aggravated it a bit; however, the flight wasn't long.

The drive from the airport to the city was pleasant and it turned out that the hotel was absolutely perfectly located: We were going to be able to walk everywhere, but I wasn't ready to venture out on my own yet. The area reminded me of New York City and there I don't have a language barrier to deal with! Besides, I was babying my nose and head. So I had a nap, watched the news (all I could get in English was a channel about British politics, so I quickly became an expert on Pritti Patel), read my book, had dinner at the hotel restaurant, and went to bed early. 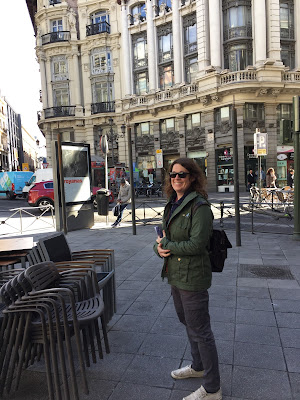 My companion's flight was scheduled to land around 8:00 but she'd sent a text that there was a delay; apparently some emotional support dogs wouldn't settle down and take-off didn't happen on time.

Mid-morning came and in the hotel's front door walked my daughter! With a minimum of luggage and a maximum of Spanish, she flew over to spend a few days exploring Madrid with me!

We got her settled in our room and headed right out in the direction of the Prado. It was a bit of a walk, but I had the map that the concierge had thoughtfully given me, and Sherry had an amazing app on her phone that was like a GPS for pedestrians. She plugged our hotel in as the base and whenever we went somewhere, these little blue dots would show us the way. I felt a bit like Hansel and Gretel. Without the worry about the witch.

We were partway to the Prado when Sherry realized she had missed a meal. Or possibly two. So we stopped and had lunch and then continued on. 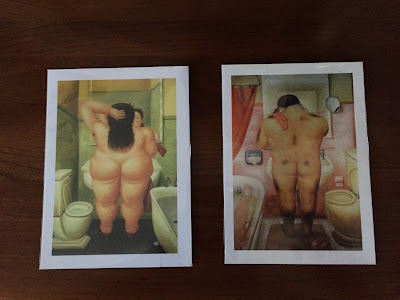 The Prado was amazing. It was ginormous. We had to limit what we would view. We saw the Garden of Earthly Delights, a painting that has long fascinated me. We saw other famous paintings. I got tired. My nose was aching. I rested and Sherry saw even more famous works of art.

Finally even she admitted to being in need of a nap, so we headed back to the hotel. A vendor outside the museum was selling reproductions and I bought these to frame and put in my powder room. They are unsigned, but I'm sure they were done by somebody very famous. They came from the Prado near the Prado! 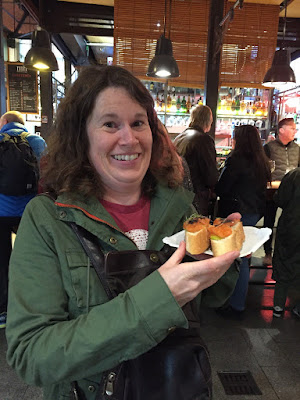 A nap worked wonders for us and we were soon ready to set forth again and this time the best place in the entire world to get chocolate and churros (according to an acquaintance of Sherry's) was part of the plan. We went in that general direction, following the blue dots on the phone, and when we were nearly there, got distracted by a horde of people heading in our direction and coming from -- where? We knew we must find out and it turned out that there was a square with restaurants surrounding it and there was a stage with Spanish folk dancers. We were going to stop and watch, but yet another horde was coming at us from -- where else? Why, the Mercado de San Miguel, of course!

I do not believe I have ever been to a place more wonderful than the Mercado. Stall upon stall upon stall vending the most beautiful food. We wanted some of everything. Here's Sherry with our smoked salmon and caviar. 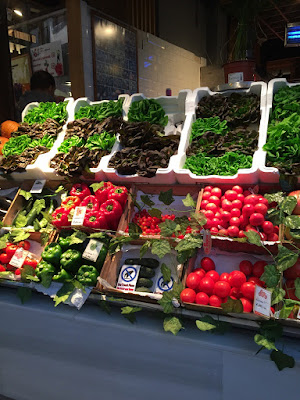 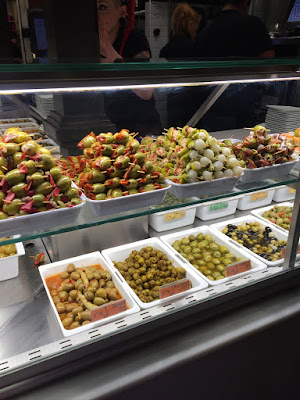 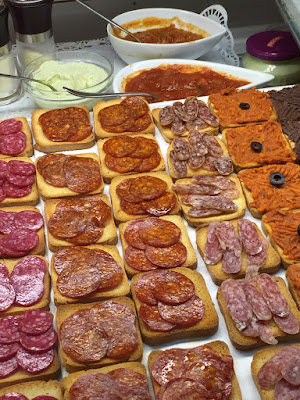 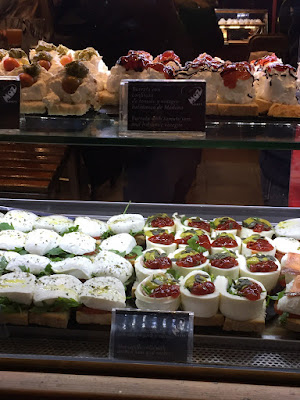 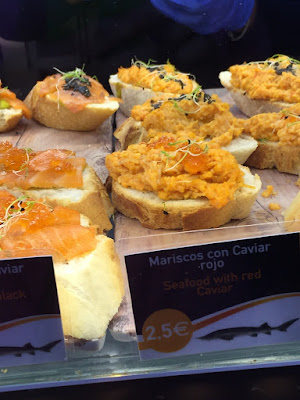 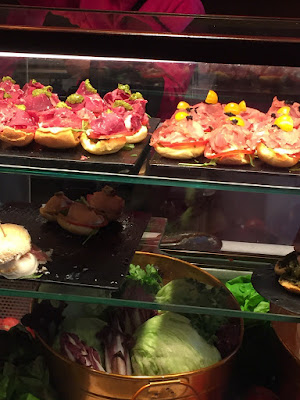 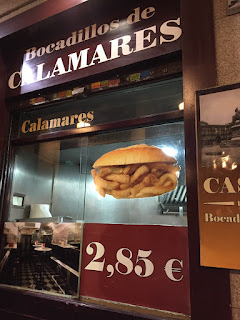 The bocadillo de calamares appears to be a local specialty and we were seriously tempted to indulge. But we really needed to sit down and relax over dinner. A squid sandwich was so intriguing!

I sent home pictures of the sandwich and we memorized the location because we really thought we needed to indulge at another time. 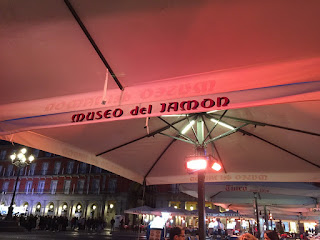 Madrid is nothing short of obsessed with ham. And for good reason. We loved it. Our restaurant of choice was none other than The Museum of Ham.

We ate outside even though the evening was chilly. The heaters under the umbrella kept us comfortable.

We had a fine view of the dancers who were celebrating some local cultural fest.

We went to the best place in the entire world for chocolate and churros and the line to get in was about three blocks long, and our stamina was fast running out. We started back to the hotel and on the way came to another chocolate and churros place and popped in for this very, very delicious treat. And came away convinced that this was the second best place. In the entire world. They need a good publicist. 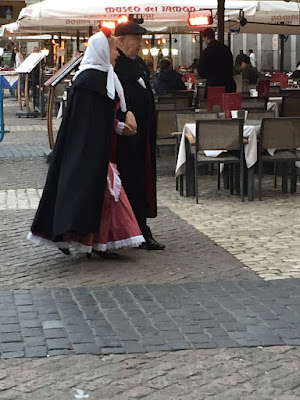 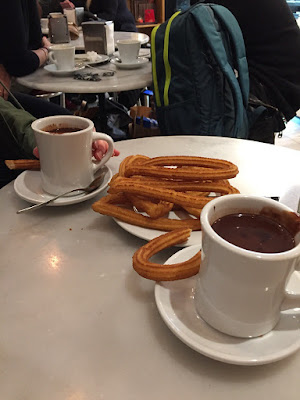 Janet O. said…
You are amazing. Your stamina seems unlimited, and your adventures are wonderful. I am so happy to follow along.
Thursday, December 14, 2017 2:50:00 AM

Nann said…
Oh, what a splendid, unexpected Big Plan -- the opera! Interesting how your friend's accent was (mis)interpreted.

(I wonder how Spaniards conduct civic business. Many/most of my weekday evenings have meetings that begin after work/after dinner, e.g. 7 p.m. The quilt guild, for example!...Unless the tapas are their version of British tea-time, which can be a hearty snack to tide one over until a later dinnertime.)
Saturday, December 16, 2017 9:32:00 AM

Tanya said…
Love your funny reproductions. They made me laugh! I hope my backside doesn't look like that! (Either one of those backsides!)
Wednesday, December 27, 2017 4:20:00 AM