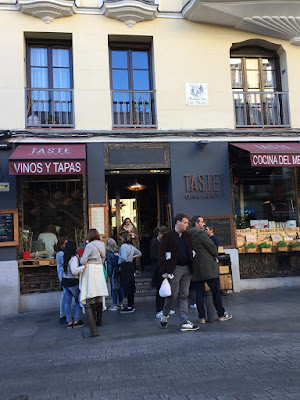 My head cold bothered me on Friday night; after the opera, I had some difficulty sleeping. For Saturday, we had tickets to El Escorial and the Valley of the Fallen. We also had More Big Plans for Saturday night. I hesitated. Sherry's an adventuress who is comfortable on her own in all kinds of settings in all kinds of countries. And I hadn't slept well.

I begged off, opting to stay in the hotel and sleep some more, go to the pharmacy for European cough medicine, and just general self care.

Sherry liked the excursion very much and by the time she returned, the Bisolvon had kicked in, I was feeling somewhat better, and we both were thinking about the Mercado and lunch! And, again, we knew what we needed to do! 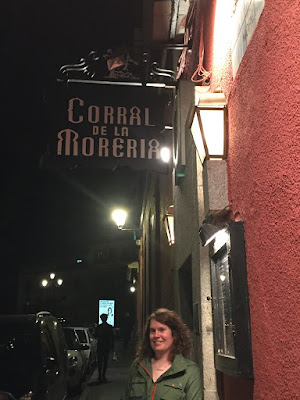 Our evening entertainment for our last night in Madrid was dinner and a show at Corral dela Moreria, a world famous flamenco venue.

Dinner was three courses, one of which was ropes viejas and it was infinitely better than the garbanzo-laden-but-still-tasty version I'd had in Las Palmas.  The dessert was called Five Textures of Chocolate. We liked it.

The flamenco show was everything we'd hoped and more. We were permitted to take photos during the first fifteen minutes and not after that.

What a wonderful ending to our trip. We were to return home on Sunday.

Meanwhile, where was Joe? 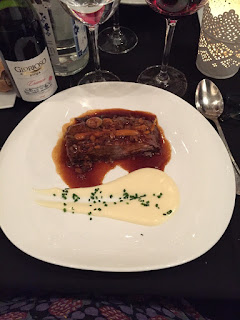 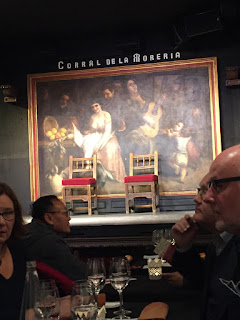 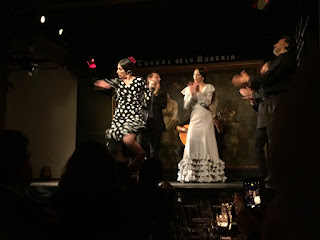 Barbara Anne said…
Wow! What an amazing time you've had and, yes, I've been wondering what became of Joe. Am glad your daughter joined you (with her Spanish vocabulary) for fun and food in Madrid.

I've been busy finishing huge quilt #2 just in time for Christmas - it and the HST quilt still need labels but are otherwise, as of 4:51pm today eastern, finished. Phew!