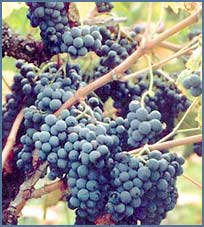 On Saturday afternoon, there wasn't much going on in the way of programming at Chautauqua, and it wasn't a good day for sailing. We'd heard that there were several wineries in the area and decided to do some visiting.
. . . .
The first winery was full of customers, which we took to be a good sign. The name of the winery was that of some of our family, and we liked that, too. They had winestems at the counter and people wearing shirts with the winery's logo behind the counter. We tasted some red, we tasted some white, and we bought a couple of bottles and moved on.
. . . .
The second winery was off the highway, on a road that was lined on both sides with vineyards. It was a pretty ride. The building for the winery was bigger than the first one; it was spacious, immaculate, and obviously brand new. There were not may people there, and we were greeted by the owner's wife. She told us that this was their fifteenth day of operation! We sampled her wines in generous sized disposable plastic glasses, and found them to be a little bit too sweet for our taste; there was a Riesling that we pronounced good, and we bought a bottle of that. The proprietress told us that before they had opened, they had invited their friends in to taste samples, and the friends all advised them to make sweet wines. She said that next year they were going to make some dry varieties. We wished her well.
. . . .
We pressed on (you should pardon the pun) to the third place. This one had a German name and was very far off the beaten path, and the road was not pretty, and there were no grapes growing. At last we arrived at our destination and it appeared to be an old house. Despite misgivings, we went in. There was no one to be seen. There was a counter with a dozen open bottles and a big sign: "I'm Upstairs. Shout!" I thought we should leave but before the words were out of my mouth, Joe had called out, "Hello!" We could hear someone talking upstairs; it seemed as though he was talking on the phone. He hollered back down that we should wait and "someone" would be right with us. So we waited, although at this point both of us wanted to leave.
. . . .
All at once we heard a car roar up and come to a screeching halt. The door flew open and in came a guy in an undershirt, kind of sticky, and with a glass eye that Joe later characterized as "Too big. He needed a size four and he had a size ten." We figured he was the guy that the man upstairs was talking to on the phone. He fixed his good (or better?) eye upon us and said, "Sign the guest book." We declined. He reached for a teensy plastic communion-type cup, poured Joe some of his white, and ignored me. He gave a spiel about his white and then gave Joe some of his other white. Joe didn't look pleased. Joe told him (mistakenly) that he thought I might like to try some red. He fixed the eye on me and poured out some, giving me some sort of a spiel. It was dreadful, dreadful, dreadful. He then poured me his "reserve" red, indicating that this particular wine would go better with lamb. I took a tiny taste. All I could think was, "They gave Him a sponge soaked with vinegar . . . ." I put the glass down and waited. Joe picked it up, obviously missing my silent caution. "I don't think we're going to buy any today," he diplomatically told One Eye, and out we went.
. . . .
Driving up the road towards winery number four, a little longer drive, neither of us said anything until finally Joe inquired, "What the heck was in that stuff?" "Cat piss," I told him confidently. We both laughed and then he launched into a sales pitch,"Try our special yellow tabby! Sample our reserve Persian!" We approached the final winery, vowing that if there were either (a) no cars outside or (b) lots of cats visible, we wouldn't go in. Turned out that neither was the case and the wine was the best we tasted.
Email Post
Labels: Chautauqua