Vacationing at Chautauqua Institution, Part One

This is our fourth year to vacation at The Chautauqua Institution. Our friend Lloyd suggested that we all spend a few days together here back in the spring of '03. I'd never heard of the place. A quick internet spree confirmed my hunch that Lloyd knew a good thing when he found it. Came home that night excited to tell Joe about it and within hours we'd rented a teensy house for a week. This is a picture of a landmark on campus that has become an emblem of the institution. It is called the Miller Bell Tower; it houses a carillon that can be heard several times each day. At some hours the carillonist plays hymns; other times, she plays secular music.
. . . .

We came back for a week the following year, two weeks last year, and two weeks this year. The place is almost impossible to explain to people who haven't experienced Chautauqua. It is kind of like camp for grownups, but so much more than that! This picture shows a typical Chautauqua house. There are all kinds of accommodations, ranging from a room with a double bed and the use of a shared kitchen in one of the denominational houses for not very much money at all, to a private 5-6 bedroom house with parking and a lake view for several thousand dollars per week. There are a few hotels on the grounds, including one very upscale one that includes all meals. It is pretty much a pedestrian community, although bicycles and electric scooters abound. Parking for most people is across the highway from the main Institution grounds. A 45-minute permit to have the car on the grounds is issued for moving in and moving out. The speed limit -- strictly enforced -- is 12 m.p.h. The Institution was built on the four pillars of Education, Religion, Arts, and Recreation.
. . . . 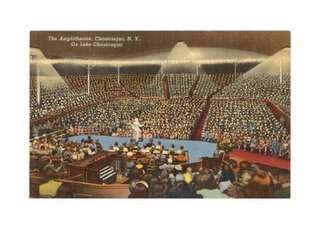 Education. Each morning at 10:45 in the amphitheatre, a noted figure speaks on the theme for the week (this week is about Ethics of Citizenship and next week is Landscape Architecture). Other speakers and seminars and classes are scheduled to complement the theme. The best week was the BioEthics week, and the Being Well, Staying Well week was also superb. The year that we learned about BioEthics, we heard speakers including Art Caplan and the President of Princeton University. This year, during the Ethics of Citizenship, we heard -- among others -- Arthur Sulzburger, publisher of The New York Times, and Senator Arlen Spector of Pennsylvania.
. . . . 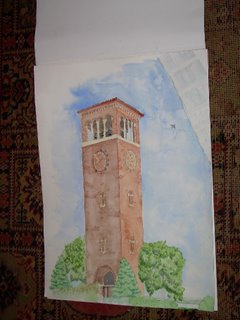 In addition to the feature lecture, there are all kinds of classes one can take. Joe took an early morning class on watercolors this week. Here is his finished painting of the Miller Bell Tower (you saw the photo at the top of this post). He'll be taking another watercolor class next week. My class this week had to do with learning the principles for Thinking Ethically. It was very interesting, and the hour allotted each day flew by too quickly. The dozen people in the class were basically Liberals. The day that we discussed gay marriage, I noticed that the one person in the class who had no gray hair at all didn't say a word. On walking home with him after class, I learned that he is a college student here on a scholarship, with a conservative Roman Catholic background. He confessed that he was too intimidated -- both by being so much younger than everyone else and by his obvious minority viewpoint -- to speak up. I felt a little sad about that.
. . . .
Religion. I spoke earlier about the denominational houses that provide inexpensive accommodations. The Sunday morning worship service held in the Amphitheatre (which seats 5000 people) features a well-known preacher -- this week it was Tony Campolo -- and the Amp is usually totally full. The choir is huge and magnificent. Sunday's preacher preaches each weekday at a 9:15 service. The Department of Religion sponsors lectures in the afternoons up at the Hall of Philosophy. One year I heard a dialogue between an Orthodox Rabbi and his Reformed Rabbi daughter.
. . . .
Arts. The arts opportunities are one of our favorite things about coming to Chautauqua. The Chautauqua Symphony usually performs three nights each week. One night we heard the Music Festival Orchestra, composed of high school students and college music students, here on scholarship to learn and perform. Ballet is offered weekly. There are opportunities to attend opera (I went to my first one here last summer with my friend Lloyd) and theatre. There are scholarship classes for ballet students and fine arts students, and exhibits, recitals, and readings occur very, very often.
. . . .
I don't know how many acres the grounds cover. There are numerous performance venues, classrooms, dormitories, practice spaces, a library, a few shops, a few places to eat, and all manner of accommodations from the religious houses where one can rent a room with a double bed and have kitchen facilities for a very low amount per week to glamorous houses that rent for upwards of $3000 per week. Many of the homes are small and old and very, very charming.
. . . .

Recreation. There is something for everyone. Many of the classes that are offered are for types of art or writing. Joe says that the sailing on Chautauqua Lake is about the best he's ever had. There are tennis courts, beaches for swimming, a golf course. There is a book club. The atmosphere in the Amphitheatre, while respectful, is more casual than usual for concerts. It isn't the least bit unusual to see cross-stitchers, knitters, quilters, Sudoko phanatics, crossword puzzlers, all pursuing their interests during the lectures and sometimes during the concerts. Speaking of concerts, there are "popular" attractions, too. One night this week we heard our first bluegrass band. Another night we were delighted to laugh with Mark Russell for a couple of hours. Last night was Mary Wilson and the Motown Sound, which wasn't really to our taste, so we went to the on-campus movie theatre.
. . . .
CI provides relaxation and it also provides renewal. Somehow the brain clears and it is easier to do serious thinking, reflection, in this atmosphere. Of course I've brought my Featherweight along and spent some time each day sewing. Joe brought Windspirit along and sails each day that it is clear. We read The Chautauqua Daily, hawked by young boys on the plaza for fifty cents. We read the books we've brought along. We have no television and little news of the world beyond. All in all, a wonderful vacation.
Email Post
Labels: Chautauqua

Anonymous said…
Sure looks like a lovely place to spend a coupla weeks during the summer.

Anonymous said…
I started vacationing at Chautaugua Institution in 2001, for a week each summer. I love it so much , that the past 2 years , I have picked 2 separate weeks each summer. Everything I want is there; music, church, great speakers,ballet, good food, wonderful people,beautiful grounds,my fave-great book store, and much, much more....a real cerebral holiday. It always leaves me wanting to learn , see and hear more.
Wednesday, February 06, 2008 2:42:00 PM