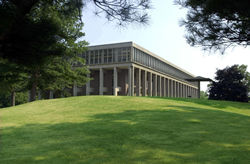 On Sunday we got up early, went out to breakfast, and then took a trip to Kent, Ohio. I hadn't been there in twenty-six years. On the way, I felt this kind of strange nervousness. I knew it would have changed, but I had no idea how.
. . . .
We first went to Kent in August of 1971. Joe had spent the 1966-67 academic year as a student there. This was, of course, during Vietnam, and the draft board was breathing down his neck the whole year. He reported for his physical as soon as the semester was over and was told he'd be drafted immediately. He enlisted in the Navy instead and we got married quickly and spent the next four years enduring the whims of the United States Navy and dreaming and planning of going back to Kent.
. . . .
I found a home there. Had a fun job working for a pair of renegade attorneys, trained to work on the Help Line, did lots of volunteer crisis intervention, started a business typing dissertations for graduate students, and had my first child. We left Kent in the summer of '75 to move to Chicago, returning to Ohio in the summer of '78 and lived two towns over from Kent for two years. The atmosphere of a college town suited me fine. I wasn't as eager as Joe was to move to Philadelphia.
. . . .
So, twenty-six years later, I returned to Kent, land of such fond memories, for the first time. It had changed. Much of downtown was far more bleak than I'd recalled, the seedy areas even seedier. The townhouses where we had lived, once a very classy address, were now obviously student rentals, and the beautiful exterior of the buildings had been covered with vinyl siding. The house which was Tom's first home was much the same, but the house nextdoor, home of our former landlords, had an overgrown lawn -- that was the first thing we noticed, and we realized that Smitty and his family no longer owned the property: they would never have let it look like that. The lawn and garden shop that they had owned was gone, as well as the rows and rows and rows of greenhouses where we used to walk the dog.
. . . .
The place where we used to have breakfast on Saturday mornings was replaced by a FedEx/Kinko establishment. The coffee shop downtown, of course, was now something else. Yet much was the same or better. Surprisingly, The Hutch, the town petshop, was still in existence. We learned from our friend Guenveur that the crisis center that had been so important to me had moved away from the little house on College Street and now owned a building downtown and had many, many new programs to serve the poor. The free clinic where I used to volunteer is greatly expanded and doing much more than testing college kids for syphillis. Some things were disappointing, others were heartening.
. . . .
The picture at the top of the post is Taylor Hall, the home of the architecture department, where Joe spent most of his waking hours during our years in Kent. We were able to go inside and go up to the studio floor; that was so much the same -- I felt good about that.
. . . .
You may have a vague recollection of Taylor Hall as the site of the Kent State shootings. During the years that we were in Kent there was much talk about permanent memorials. When we pulled into the parking lot, we saw them. We paused at each one and quietly remembered Allison Krause, Jeffrey Miller, William Schroeder and Sandra Scheuer.
Email Post
Labels: History Other Travel

Anonymous said…
"Vague"? .... not a chance. In May of 1970, I was a junior in college in upstate NY. Many campuses were centers of anti-war activity at that time. Mine was no different, and I was involved peripherally in demonstrations, marches, and 'teach-ins'.

The mere words "Kent State" will always mean "They're killing us now" to me (to quote a close friend at the time). I will never forget the tears we shed together for those who were shot, those who were killed, and, yes, even for ourselves and our unknown future.

In 1989 or early 1990, when we were living in Delaware, Ohio, I went to "Kent State" for a day on business. I was haunted by the specter of that memory and looked for something -- anything -- that would mark the memory of that day and those people. There was nothing. Fifteen years later, I still remember the depressed feeling that the lack of a tangible reminder of that May day meant that that tragedy had been successfully swept under the rug of time.

I'm glad there is finally a marker. Maybe someday I can go back.