Fourth of July, Near Philadelphia 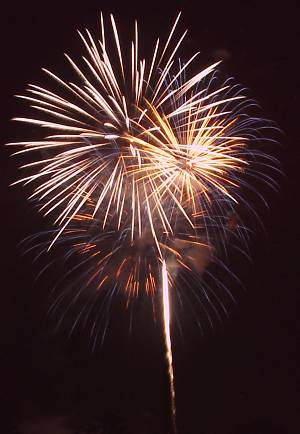 Here in our little town Near Philadelphia, the Fourth of July is an important holiday and celebrated the whole day long. When our kids were little, we participated in every possible aspect and event. The day would start down at the park, where there was a competition for decorated tricycles and bicycles. There was even a category for baby buggies decorated with red, white, and blue crepe paper. Then the foot races, the peanut scramble, those kinds of things. Free refreshments were given out, but after the trek back home, we'd sit down to lunch.
. . . .
Next we'd put on the television -- Jean Shepherd had produced a wonderful filmed version of his "The Great American Fourth of July and Other Disasters," and it was shown on our PBS channel in the early afternoon on the Fourth. We just loved it, and still quote lines from it. Mrs. Y. Y. Flurch is someone from our personal history as is drum major Duckworth (who never looked back). We honestly believe they are real
. . . .
Off next to Penbryn Pool where there were special activities, including an event where coins would be thrown into the medium pool -- the kids could dive for them and keep any they could retrieve
. . . .
The parade began around 4 o'clock and usually went on for two hours. Sherry loved to count the fire engines. There were always the motor cycle drill team, a string band, a couple of bagpipe bands, and all kinds of floats and other participants. Following the parade, we'd get cleaned up and head up to Carol's for a picnic. Now that we've moved up close to Carol (and to the fireworks site), WE have the picnic and Carol comes to us
. . . .
We had about 20 yesterday. Everyone brought something to share. Joe cooked burgers, dogs, and brats on the grill. Honna's beans were delicious. People ate and laughed and caught up (some of the participants see each other ONLY at this event). Sherry and Sam were in attendance and he was passed around and held by every female present. Carol had brought him a new pacifier -- it has some kind of electronic gizmo in it that flashes red, white and blue! I tried to get a picture, but it didn't show up quite right.
. . . .
When we'd visited Virginia a couple of weeks ago, Joe bought a supply of the ground-type fireworks. He was itching to get out there with them, so after dinner he rounded up the only little girl present (Juliette, age 9, I think), and the two of them had a blast. Literally. We dragged our chairs outside to enjoy this year's offering by the local patriotic association. They (the fireworks, not the patriots!) are set off just about two blocks from where we live and we are fortunate to not have to get in all of the crowds and traffic to see them. We just sit out on our own front lawn.
. . . .
Carol's husband Bill is a mover and a shaker with the patriotic association. He recruits the units for the parade, makes sure everything is happening on time, arranges for the fireworks, and even does the speaking before the fireworks. He's the most Independence Day person I know. I asked him once if he had been born on the Fourth of July. He said he hadn't. But I think he's mistaken.
Email Post
Labels: Family History

Susan said…
What a great picture, Nancy! I loved your description of your Independence Day celebration. It's exactly what a friend in Germany wanted to know about what is traditional.
Thursday, July 06, 2006 11:35:00 AM