Friends in the Chautauqua Area 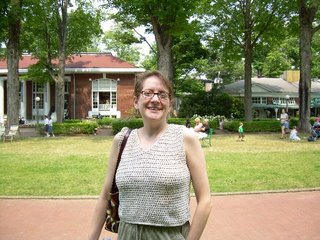 The first full day that we were at Chautauqua, I spent some time with my seminary classmate Keg, who drove down from Near Buffalo to visit. I hadn't seen Keg in nine years, since her graduation from seminary. She hasn't changed a bit. Still the same vivacious, spirit-filled, opinionated, outspoken woman with the impish grin she has always sported. Despite a chronic health condition that requires periodic tune-ups in hospital and a recent divorce, she remains optimistic and fervently in love with God. We had lunch together at the place to eat at Chautauqua (try a Reuben sandwich at $14.95!!!) and reminisced and gossiped and caught up. After lunch we wandered down to the Amphitheatre to listen to the Washington High School Steel Band. They were amazing. It was awfuly good to see Keg and I hope it isn't another nine years before we connect again.
. . . . 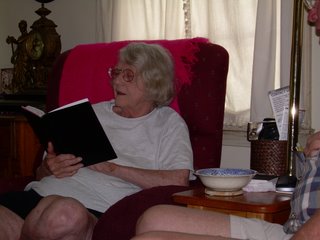 The middle Sunday of our stay at Chautauqua, we took a trip. We drove three hours down to Kent, Ohio (I think I'll write more about Kent in a separate post) to visit some long-time friends. First we stopped at Guenveur's. Her house looked the same as it did the last time I saw it in 1980 just before we moved from Cuyahoga Falls, Ohio, to Near Philadelphia. Both Joe and I missed the goats that she used to have in her back yard. Guenveur looked somewhat older, but was still the same lively, entertaining woman who really knows how to tell a story.
. . . .
We'd met in the autumn of 1971, just after Joe and I moved to Kent; Guenveur and I were in the same training class for Help Line, the Crisis Intervention Center sponsored by the University. We hit it off immediately, despite an age difference of pretty many years. She was a widowed mother of four; I was a childless person who'd been married just four years. The delight she took in the arrival of Tom, three years later! She stayed with Help Line through many mergers with other organizations for a long, long time and finally retired. Guenveur raised her kids to be their own people. Her trademark reply to "How are you?" always was, "Fair to middlin' -- can't complain." And she never did complain. She's a reader, painter, writer, musician, inveterate student, with one of those wonderful laughs that you just want to hear over and over.
. . . . 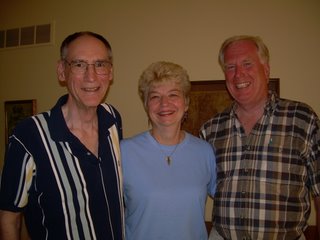 Leaving Guenveur's, we headed over to Lloyd and Roberta's. I'd met Roberta at a newcomer's club the first month that we lived in Kent. Turned out we lived in the same apartment complex and both had an interest in the book discussion group. We joined that, introduced our husbands, and the rest became wonderful history. Lloyd, now retired, was the rector of the church that we attended. He has a passion for caring for the poor that somehow our Andrew has inherited. Roberta was a stay-at-home traditional wife at that point, who was obviously gifted to do more than take care of Lloyd and the house. At one point I was juggling three part-time jobs and decided that was one job too many. A few hours of week typing for the Portage County Mental Health and Retardation Board had to go. I called Roberta and asked, "Would you like one of my jobs?" She would. That has been thirty-plus years now, and having acquired some sort of a degree in public policy, she's talking about retiring as Director of the agency after accomplishing so many wonderful things for those who live at the fringes of society in Portage County. Lloyd is still one of the best serious huggers on the face of the earth. Health issues have rendered him far too skinny, which I didn't wait long to point out. My first spiritual mentor, Lloyd made more of a difference in my life than he can imagine.
. . . .
Lloyd and Roberta have made many trips to visit us Near Philadelphia. We took them to Cape May one time, and they became as smitten with the place as we were, and returned several times for long weekends together at The Mainstay. Four years ago, when we were talking about getting together again, Lloyd suggested we spend a few days together at the Chautauqua Institution. We did that for three years. This year he wasn't feeling up to the trek and the crowds so we went down to visit them in Kent. They'd wanted us to see their new home, which is just perfect. Roberta fixed us a delicious dinner and far too soon we had to leave for our three-hour trip "home."
Email Post
Labels: Friendship