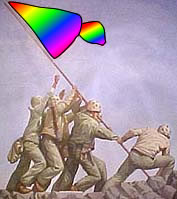 Our landlord here at Chautauqua, one of the finest and most well-respected theological minds of the last and current century, had a letter in this morning's edition of "The Chautauquan Daily." A retired professor from the Yale School of Divinity, he is one of those people like Tim Wengert, who somehow makes me feel in the presence of wisdom personified. Usually.
. . . .
Here's what he says, in part, "The issue of homosexuality has its most detailed exposition within the New Testament in Romans, chapter 1, in which Paul gives the theological grounding for its prohibition according to the law of Christ. The Apostle does not single it out as a special, greivious sin, but describes its painful function as an enduring sign testifying to the profound ontological fracture between the Creator and his creation, the alientation between whom is reflected in a willful distortion of the divine intention for humanity (Rom. 1:21-27)."
. . . .
AAARRGH.
. . . .
In contrast, I urge you to visit Andrew's observations on the subject of gay marriage as considered by the Congress earlier this week: http://www.orangeandrew.com/
. . . .
I need to find a rainbow flag. I really do.
Email Post