The Cheesesteak Embarrassment, in Philadelphia 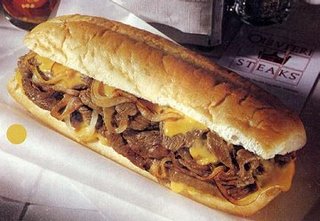 The cheesesteak sandwich is the quintessential Philadelphia food. As a regional specialty, it is right up there with NOLA's muffeletta, with New York's cheesecake. When natives move away from Philadelphia, everytime they come home, they have to have a cheesesteak. The delicacy originated decades ago, in South Philadelphia, at a place called Pat's. Across the street is Pat's chief competitor, Geno's. You don't have to go to Pat's or Geno's to have a good cheesesteak. There are plenty of good places in the greater Philadelphia area. The thing is, you don't want to go too far out.
. . . .
A cheesesteak starts with a roll which must be just right, not too hard and not to soft, with just the right degree of crispness on the outside. The beef is sliced paper thin and cooked on the grill. You order your sandwich "wit" or "wit-out." Onions, that is. The onions are fried on the grill. You can get some mushrooms fried on the grill, too, if you like. I like. Traditionally the cheese is Cheese Whiz, but some places use Provolone or even American cheese. Usually you douse it with some ketchup.
. . . .
One time Tom and Chris were in South Philly and decided to get one from Pat's and one from Geno's and see which was the better. I don't remember the outcome; I just remember the complaints about indigestion. Mostly we get our cheesesteaks at Lee's Hoagie House in Abington. Rizzo's has a decent cheesesteak, too. Joe likes a place over near Manayunk, but I think that's kind of out of the way. I remember a period in the 80s when we made them at home.
. . . .
Recently, Geno's posted a sign which was perceived as inhospitable to non-Americans, particularly Mexicans. The sign said something like "This is America. Speak English." I was appalled. For the first time ever I wasn't proud of being from Near Philadelphia. I thought that it was particularly appalling that this sign should show up in the "City of Brotherly Love." I remembered our trip to Italy back in 2000 and how patient the restaurant personnel were with our nonexistent Italian, our pointing to the menu, our garbled attempts at pronounciation, and, finally, our English. In fact, as I look back on it, most of the restauranteurs in Italy spoke English. In our country, we don't make much of an effort to learn the languages of our visitors, and yet people from all over visit Philadelphia and manage to get fed. Geno's sign is downright offensive and unwelcoming.
. . . .
I wonder, my far flung friends, if I've roused your curiosity about this dish. Want to try one? Wit or wit-out? With some mushrooms or even with some sauteed peppers. Oh, yum. Come to Philly; I'd love to buy you a cheesesteak. But it won't be from Geno's.
Email Post
Labels: History