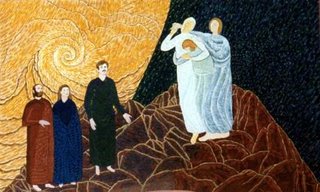 The first week that I was at Chautauqua, one morning I went to hear Joan Brown Campbell preach. I'd seen her lead worship once before and something told me she would be a good preacher. I wasn't disappointed. This is the text she used:

And he called the twelve together and gave them power and authority over all demons and to cure diseases, and he sent them out to proclaim the kingdom of God and to heal.
. . . .
Now about eight days after these sayings he took with him Peter and John and James and went up on the mountain to pray. And as he was praying, the appearance of his face was altered, and his clothing became dazzling white. And behold, two men were talking with him, Moses and Elijah, who appeared in glory and spoke of his departure, which he was about to accomplish at Jerusalem. Now Peter and those who were with him were heavy with sleep, but when they became fully awake they saw his glory and the two men who stood with him. And as the men were parting from him, Peter said to Jesus, “Master, it is good that we are here. Let us make three tents, one for you and one for Moses and one for Elijah”—not knowing what he said. As he was saying these things, a cloud came and overshadowed them, and they were afraid as they entered the cloud. And a voice came out of the cloud, saying, “This is my Son, my Chosen One; listen to him!” And when the voice had spoken, Jesus was found alone. And they kept silent and told no one in those days anything of what they had seen.
. . . .
On the next day, when they had come down from the mountain, a great crowd met him. And behold, a man from the crowd cried out, “Teacher, I beg you to look at my son, for he is my only child. And behold, a spirit seizes him, and he suddenly cries out. It convulses him so that he foams at the mouth; and shatters him, and will hardly leave him. And I begged your disciples to cast it out, but they could not.” Jesus answered, “O faithless and twisted generation, how long am I to be with you and bear with you? Bring your son here.” While he was coming, the demon threw him to the ground and convulsed him. But Jesus rebuked the unclean spirit and healed the boy, and gave him back to his father. And all were astonished at the majesty of God.

I think that everytime I've heard preaching on the Transfiguration, the emphasis was always on (a) the revelation that Jesus is God's son or (b) poor bumbling Peter who just can't get it right. Both very good interpretations.

Joan's sermon made the point that God did not intend for us to take our God-given gifts and hole up together, enjoying a beautiful view, but rather to use them to serve the poor.

I've thought and thought about that sermon. It was very, very good. Here are my reflections:

Susan said…
To everything there is a season, and a time to every purpose under the heaven;....

Someone I knew used to say if you haven't filled your bucket, you can't water the flowers.