"Your Kids Can Make You Cry," said Cathy.

The first time I was aware of it was when Tom was very young and swam the width of the pool in order to qualify for being allowed in deep water. He'd been very nervous and not at all confident; I was pretty sure he could do it but had begun to buy into his uncertainty. As I saw him take the last few strokes to touch the wall, my eyes filled up with tears and I got this huge lump in my froat. Talking to Cathy about it later on, she remarked, "Oh, yes, your kids can make you cry." And she wasn't talking about anger or sadness; she was talking about pride.
. . . .
Since that day so long ago there have been many more tears and lumps produced by pride. In the past six months it has happened with all three of them. They didn't know it, I don't think, and perhaps I'm not good enough at telling them when I'm proud.
. . . . 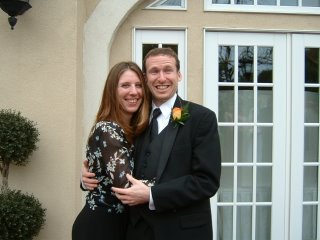 It started with Tom. Yes, the one who has been married now for one entire week. He and Anastasia had become engaged in the early part of winter and were planning their wedding. When we visited them at New Year's, they were talking about a small wedding with family and about thirty guests. They were going to talk to reception places and caterers the following week. Tom had a savings account and was planning to use some of it to pay for the wedding reception.
. . . .
One Sunday afternoon, the phone rang and it was Tom, sounding very serious. "Mom," he said. "I have to talk to you about the wedding." He went on to say that their investigation of wedding costs had revealed a situation where the cost -- for even the modest affair they were planning -- was formidable. "I can't spend my entire savings on just one day, Mom. Anastasia understands, and she agrees." The maturity of his decision filled me with that same swim-across-the-pool pride. I had a hard time answering him because of the lump in my throat. They ended up having a small and intimate wedding, and it was just perfect. And much of Tom's savings is intact.
. . . . 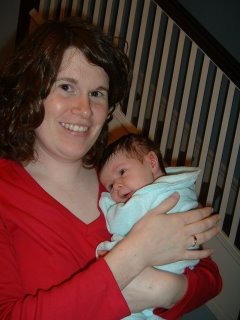 Then came Sherry, who has done it so many times during these past four months. When I went to the hospital on that first day to meet Sam, I could hardly see him because of the tears filling my eyes. "Don't you want to hold him?" asked Chris. And I guess they were both perplexed by how long it took for me to answer. Of course I wanted to hold him, but I needed to see him first. And when Sherry told of her birthing experience and how strong she had been, I was so proud of her for doing something I never quite pulled off. Watching her grow as a mother and seeing her patience with her little boy has filled me with pride on a regular basis.
. . . . 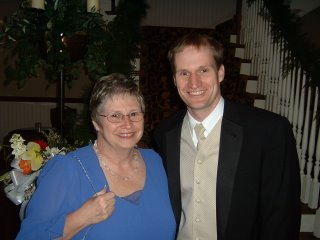 The Andrew piece is a little different. Because the things he has been doing are far less visible than weddings and babies. But his activities have such broad implications! He works as an aide to a U.S. Congresswoman (a liberal Democrat, needless to say), and recently has been involved in formulating policies which will help those who live at the margins of our society.
. . . .
Back in December he told us about some legislation he had written that would add another layer of protection to women living is shelters where they had gone to flee their abusive partners. The way the system had been set up, it would have been relatively easy for the abusers to track the women down, simply by having someone examine the records of the shelter. Andrew's plan forged a way for the women to be at the shelter anonymously, and for the shelter to still be eligible to receive federal support.
. . . .
The Op-Ed piece that Andrew penned for his Congresswoman's home state implores her fellow legislators to raise the minimum wage -- for the first time in nine years -- and requiring full disclosure by top executives, thus attempting to reduce the disparity in pay between top and bottom earners.
. . . .
Finally, Andrew was a co-author of a piece of recently passed legislation, which would increase the limited number of opportunities that low-income families receiving Section 8 tenant-based vouchers have to increase their credit rating. The amendment to H.R. 5443, the Section 8 Voucher Reform Act, would give Public Housing Authorities the option of reporting a tenant's timely rent payments, upon request, to the credit reporting agencies in order to boost the tenant's credit rating and therefore increase likelihood of qualifying for future home ownership.
. . . .
This is important and far-reaching work that Andrew is quietly doing in the background, bit by bit, trying to make life better for those who struggle with issues that I can't begin to imagine.
Email Post
Labels: Family

Ms. Jan said…
Over the years, I feel I've come to know your kids as I know you from your wonderul stories. No small wonder that you are so proud of them all! It has been a busy 12 months in your family and I'm glad to have been witness to it all.
xoxoxoxo
Sunday, July 02, 2006 7:09:00 PM

Susan said…
You have plenty of reasons to be proud of your children, Nancy. They are all doing wonderful jobs of following your example.
Monday, July 03, 2006 7:07:00 PM