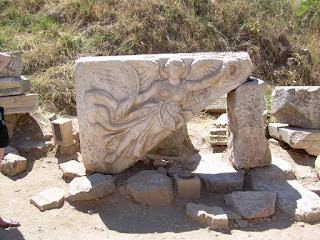 Many days we visited ancient ruins. Our first stop was Kusadasi, Turkey, where we visited the ancient village of Ephesus (remember Paul's letter to the Ephesians? Yes, that Ephesus!). There were two optional tours there; the first was to the home where Mary had lived after the crucifixion, and the other was to the excavated terraced houses of Ephesus. Joe and I both thought that the terraced houses would be the thing to do, and so we did. The tour started at the agora (marketplace) and we saw remains of shops, shrines, monuments, public baths, physician's office, and even communal lavatories! The picture above is a shrine to the goddess Nike, a powerful woman who cut off one of her breasts in order to be better able to use her bow and arrow. 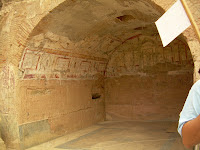 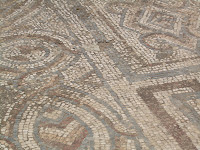 The top picture is a fresco in one of the restored terraced houses. The second one is one any quilter would have to take -- a mosaic floor in the terraced house. 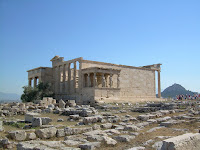 We visited ruins in many places. By the time we got to the Acropolis in Athens (above), I'd long since developed my own approach to the ruins. Summertime Greece is hot. Much hotter that Near Philadelphia. Much, much hotter. The temperature rose daily to between 100 and 115 and most of our ruin exploration was in the afternoon.

. . . .
My favorite accessories were my hat, my water bottle, and my Crocs. Each of us bought water bottles which we carried at all times, and we generally filled them a couple of times at rest areas between purchases.
. . . .
I don't function well with extreme heat, and after Ephesus, I decided to go as far as I was comfortable as we visited each ruin, and then find a shady spot to sit and wait for the group. I began to think of myself as a bit of an aging -- if not quite ancient -- ruin, and this was just fine. Often there would be another sensible grandmother sharing my spot, and I enjoyed meeting women from all over at these times. Other times I was alone, and this was a wonderful opportunity to ponder the ancientness, the vastness, and the meaning of the ruins. Most of them were linked with stories of the gods and goddesses, and as I rested on a huge piece of flat marble, those stories didn't seem so far-fetched as they once did. It occurred to me that all peoples strive to find explanations for that which is greater than themselves.
. . . .
Next Post: Churches of the Greek Isles
Email Post
Labels: Greece