A Quilt for Tom and Anastasia 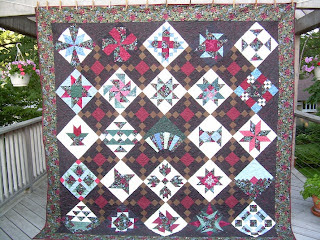 Maureen started it. She might not even remember the post that she sent to the Fat Quarters list. It read something like, "Why don't we do a Favorite Fabric Swap?" None of us could think of a good reason why we shouldn't, and before long each was sending out F8s of her favorite fabric, and everyone was busy making blocks for each other. I had bought my Hoffman print not knowing what I was going to do with it, and this seemed to be just the thing. The blocks that came in were terrific, and I sent the same fabric out for the next round of the swap and accumulated lots and lots of pretty blocks. Which I put away.
. . . .
A year or so ago when Tom and Anastasia were visiting, they took home with them a pair of dressers that Joe had antiqued with a lovely blue. They wanted them for the bedroom. Around that time Woody had an amazing cyber yard sale where I bought a blue and while area rug that we didn't need, but for $20 I figured somebody was going to need it. Turns out I was right; T&A were tickled to have it. Anastasia was talking about how pretty their bedroom was going to be and all at once that stack of blocks came to mind. We scurried downstairs and put them up on the wall; she had such fun arranging them just so (the fan had to go in the center) and all at once I knew what I wanted for the intermediate blocks. It took me a while to get to the project, though and before the blocks were together, I was at Sauder's one day and found the same Hoffman print as the favorite fabric, only this time it was enhanced with gold -- so the border was decided. I got it all together a couple of months ago and sent it off to Branky to quilt. She did a fantastic job, echoing the pattern from the main print. Now is is bound and ready to go to its rightful owners. And now they have a new house with a bigger bedroom. It is all going to be so sweet.
Email Post
Labels: Quilts

Anonymous said…
I remember that fabric and I see some familiar blocks. Good job of settting them with the alternating blocks. You inspire me!
Kathy B
Tuesday, July 03, 2007 2:12:00 PM