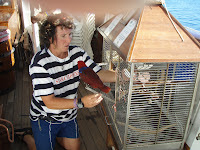 Of course the ship had a parrot, Celesta, shown here with Katharina the crew member whose duties included the parrot's care. Celesta had no words, but that didn't stop her from shrieking unintelligible insults at us as we passed by her cage on the main deck! 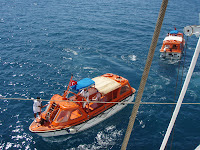 In Turkey, we were able to pull into the harbor and tie up to the dock, but in all of the island ports, we would anchor offshore and be carried back and forth in these tenders. 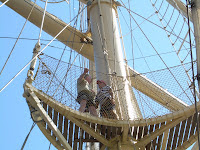 The ship personnel never tired of inventing activities for anyone who was interested. One day they invited people to climb the mast and You Know Who had to do it. This picture is Joe in the crow's nest with Johan, the activities director. 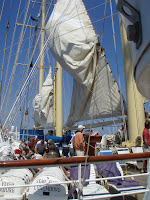 We never tired of just sitting on the deck and watching the activities connected with a sailing vessel. Watching the sails being hoisted and pulled down provided endless fascination. One day we had Force Nine winds that ripped the mainsail. The next day, the sailmaker was set up on the main deck repairing it. He was quite the old salt and Joe, who caught a closer look than I, claimed he had about seventeeth. You should have seen the sewing machine this guy used! 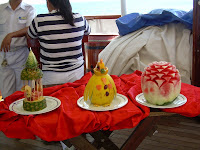 Eager to improve our minds and skills, lessons of all kinds were provided. One afternoon we spent a half hour in the dining room learning unusual napkin folding techniques. Another day there was a fruit carving demonstration. 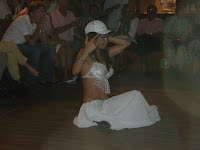 In the evenings there was usually some form of deck entertainment including a talent show, a frog racing competition, and the night we left Turkey, a belly dancer! 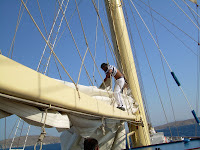 When we'd get ready to sail out of a port, the sails were raised in a particular order and most of the passengers would gather to watch. This was all done to the accompaniment of a distinctive piece of music, and was very moving. 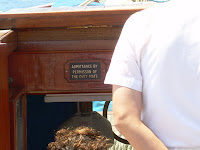 As a collector of misspelled words in unusual places, I couldn't resist this sign on the ship's bridge.
. . . .
Next Post: Island Vistas

Susan said…
Trust a quilter to notice the sewing machine. =) I didn't realize you were on a sailing yacht. It looks like it was very, very interesting, and such unusual things to learn!
Saturday, July 28, 2007 10:17:00 PM