A Quick Trip to Turkey 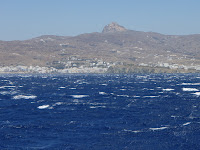 The first port we visited was Kusadasi, Turkey. This town that is really nothing to speak of on its own has developed popularity for tourists because of its proximity to the ancient town of Ephesus, made famous by Paul's Epistle and the archaeological dig. This picture was taken as we approached the Kusadasi harbor. 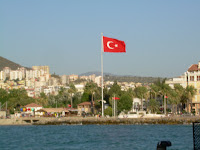 The Turkish flag is pretty. Late that night as we sat out on the deck we saw the same phase of the moon with a nearby star and were struck by the resemblance to the flag. This flagpole is at the port. While we were there, Star Flyer also flew a Turkish flag out of respect to the laws of Turkey. 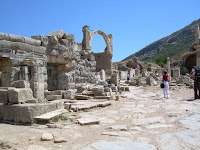 We signed up for the tour of the terraced houses at Ephesus; the tour was long and the temperature was hot. It was fascinating, though, to see the shrines to the ancient Greek gods, the streets, the marketplace, the gates and temples. The excavation and reconstruction of the terraced houses was the best archaeological work we saw on the entire trip, and I kept thinking of Sherry.
. . . .
There was no breeze and precious little shade, and the ground dust was abundant. It made me think of the Gospel warning, "Whoever doesn't receive you, nor hear your words, as you go out of that house or that city, shake off the dust from your feet." I was wearing my Birkenstock sandals that day and there was plenty of dust to shake off! 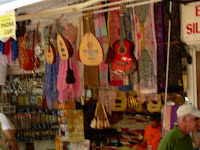 Located just beyond the exit of the ruin area was a marketplace. The shopkeepers were aggressive, the prices were inflated, and the experience there was generally offensive. We stopped at a stand and had what was (due to the heat and exhaustion factors) possibly the best orange drink either of us had ever tasted! I took this picture with Tom in mind -- they certainly do sell guitars! 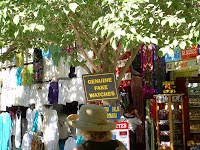 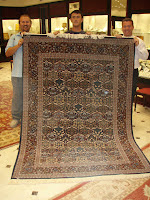 On the way back to the Kusadasi port, we had the opportunity to stop and learn how Turkish carpets are made. I was tired and could take it or leave it, but Joe thought he'd like to make the stop. Promises of airconditioning and additional water persuaded me. It was interesting and a lot of fun. There were rugs stacked all over, and hanging on the walls. One caught my attention immediately -- it was hanging on the wall to the right and had a lot of blue in it. Imagine my surprise when Joe said he thought we should buy a rug for our morning room! And my greater surprise when he indicated that he had been attracted by the exact same rug! We had the good sense to dicker the price a bit, and it will be home in just a couple of weeks!
. . . .
Next Post: Odds and Ends
Email Post
Labels: Greece

Pam said…
I am really enjoying your holiday!! Thank you so much for sharing it with us. It sounds like it was an amazing time especially the boat!!
Sunday, July 29, 2007 4:15:00 PM

Susan said…
Thanks for more pics. I love that sign! LOL! Honesty where least expected! You've reminded me I have orange/pineapple juice waiting in the fridge! It isn't quite 100 here and I'm not out walking in it, but it will still taste good.
Sunday, July 29, 2007 7:01:00 PM

CONNIE W said…
I enjoyed seeing the photos of your trip. A very interesting place to visit. Thanks for sharing them with us.
Sunday, July 29, 2007 7:06:00 PM

Anonymous said…
What a gorgeous rug! And I just wanted to say how very much I enjoy your blog and your take on things in general. I'd love to go on a sailing cruise (unlikely as my husband thinks cruises are anathema) and I am _so_ enjoying living yours vicariously!

Mrs. Goodneedle said…
Good choice on the rug, please do post a picture of it installed in your morning room after it arrives near Philadelphia. I have enjoyed immensely your travelogue... were you able to enjoy all the local food?
Monday, July 30, 2007 8:44:00 AM