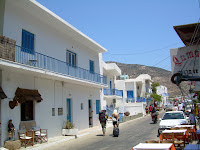 A street scene on Sifnos, the last island we visited while aboard Star Flyer. Sifnos was the hottest island, and had the best pottery. We bought some bowls and small pots with lids for our kitchen as well as a pitcher on Sifnos. 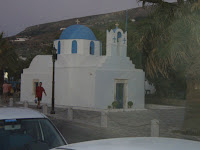 We saw hundreds of these churches. This one is on Paros. 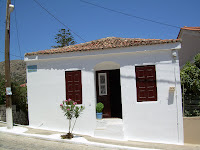 A typical house; this one is in Pythagorea (home of the famous theorem creator!). What was amazing was the crisp cleanliness, the white and the blue everywhere. This house had a terra cotta roof. Others had blue roofs. 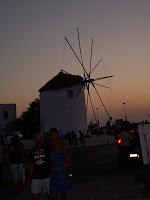 Several islands had windmills. I loved them all, both the traditional ones like this one and the modern ones, too. One place we traveled, we saw windmill blades and other components in a large field, waiting to be put together. The blades were massive. 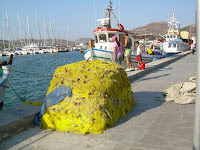 The harbor on Paros. The big bundle is fishing nets. 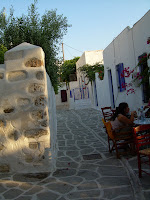 We saw hundreds of these winding side streets on all of the islands. Venturing down often led to surprising sights. 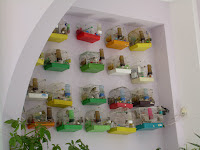 An example of a surprising sight! This house had two exterior walls with these birdcages, one or two birds to a cage. 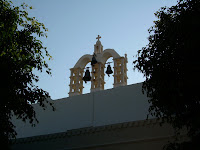 We were supposed to visit Mykonos, but the sea was too rough there and the captain decided we'd go to Paros instead. There we saw the Church of A Hundred Doors. This is the bell tower of that church. 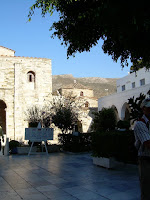 The legend is that the church complex had 100 doors and 99 were located. Supposedly, when the last door is located, the parts of Greece that were taken by Turkey would be returned. 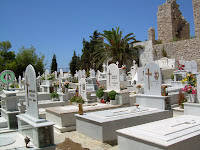 We visited this graveyard outside a church on Samos. There are little shrines with photographs, lamps, icons, and possessions of the deceased. We were surprised to find no death dates more recent that 2001. Clearly there is something going on that we did not understand.
. . . .
Next Post: A Quick Trip to Turkey

Susan said…
Wonderful pictures. Every time I see things from that area of the world, the whites seem so white and the blue sky so blue. That cemetary at the end reminds me of one I've seen somewhere, but I can't think where. It couldn't have been there, because I've not been there. =)