Churches of the Greek Isles 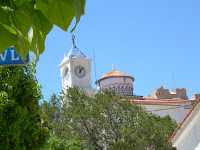 Samos was the first island we visited, and soon after entering the port we saw this church from afar. A long climb later we were there! 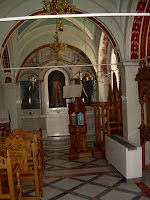 At least ninety percent of the churches in Greece are Greek Orthodox, and the style is decidedly Byzantine. This church is not the most elaborate one that we visited! 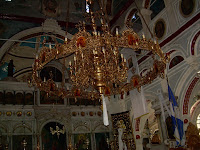 The chandelier in the church was intricate and lovely, though not something I'd want in my center hall. 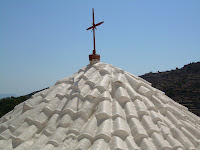 In Patmos I visited a cave where tradition indicates the book of Revelation was written by John. Photos were forbidden, and I chose not to purchase the ones that were at the gift stand. I took with several grains of salt some of the things that the guide said, including the "proofs" that this cave was the actual one where Revelation was dictated. It didn't matter to me whether it was or wasn't. I found it interesting, but not particularly sacred. The picture above is of the dome of the monastery built over the Cave. I liked the dome better than the Cave! 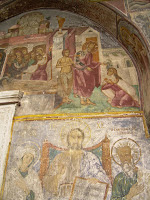 This is one of the frescoes at the entrance to the cave. 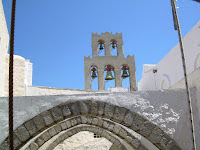 This bell tower is part of the monastery. 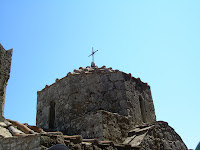 This is the dome on top of the Cave. Inside were three artifacts that supposedly were the place where John rested his head, the handle he used to get pull himself up from his rest, and the shelf that served as a desk where his secretary wrote down the revelations. I wasn't utterly convinced. In the ceiling of the cave was a large crack that had three branches; the guide said it had been made by the voice of God and the three branches were proof of this. Again, I didn't believe it. My thought is that trying to prove God isn't a good idea. Faith in something that cannot be proven seems much better to me.

Susan said…
Just to know you were on the island where he surely was must have been wonderful. I love the tile pattern on the roof. Great pictures of everything. That chandelier reminds me of something you'd see in Russia.
Saturday, July 28, 2007 10:21:00 PM