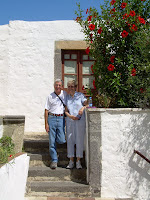 Len and Luanne from Colorado were the first people we met, and we enjoyed their company so much. Len and Joe had much in common. Luanne was so sweet; she and I were companions in mal-de-mer on Sunday. 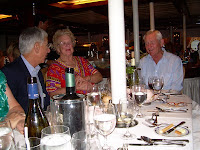 Helen and Raymond were hilarious. Retired obstetrician and midwife, they are from Australia and have done a lot of traveling. 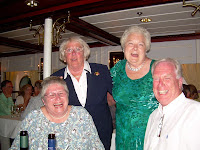 A fearless foursome. Joe and me on the night of our anniversary with the Swedish grandmother and Jill. 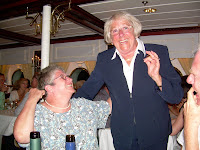 A pair of Swedish grandmothers. She and her husband were celebrating their 50th anniversary and had brought their children and grandchildren -- a party totalling eleven -- on the trip. 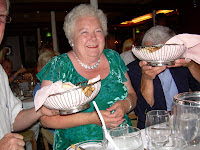 Jill is beseiged by breadbaskets. She and Janet are from England. We met them the first night out and continued to enjoy spending time with them throughout the week. Alas, I never got a picture of Janet. 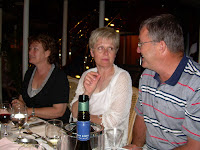 Luanne in the middle, flanked by Yvonne and Lindsay who own a guest house in the wine country of Australia. They thought we might want to come visit them sometime. We thought so too.
. . . .
Next Post: The Love of My Life